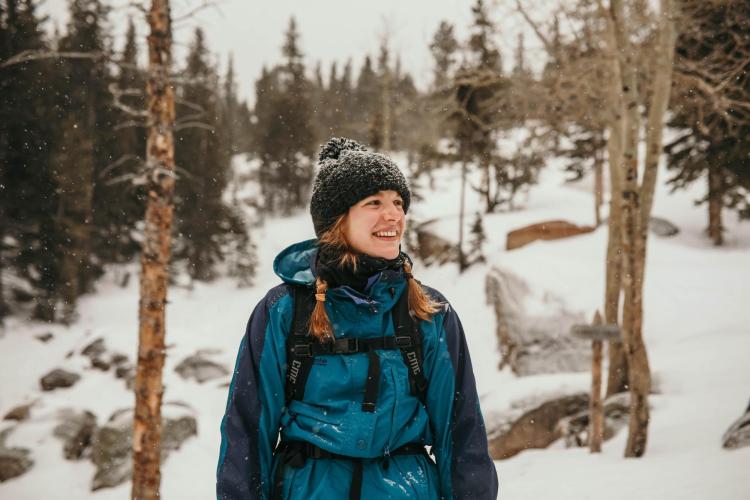 Lydia Wagenknecht was 5 when she began taking piano lessons. Although she loved the sound of the music, she wasn’t keen on practicing. So, being from Wisconsin, Wagenknecht’s mom bribed her young daughter with cheese to entice her to practice.

The strategy must have worked since Wagenknecht can now play the piano more skillfully and is a PhD candidate in ethnomusicology at CU Boulder’s College of Music.

“While singing in a high school choir, I realized I wanted a career as a music teacher,” she says. “Music is something I’ve always been excited about. But I’m interested in a lot of things, not just playing the piano. I’ve been interested in learning to speak Spanish, other languages, history, activism and ecotourism. I love how ethnomusicology brings so many elements together and allows me to work with people and tell stories, which is something I’m excited about.”

Ethnomusicology is the study of music in its social and cultural contexts. Wagenknecht began scholarly work in the field to delve into questions of equity, justice and ecotourism. She has even come to embrace Chilean musical activism. It all makes a good fit for combining her many interests into a cohesive career.

An initial interest in German/Chilean musical interactions from the 20th century piqued an interest in Chilean immigration in general. That interest brought the city of Puntarenas into focus; located in the southern peninsula of Chile, the city has a connection for many researchers who study weather and climate change in Antarctica.

“Punta Arenas is like an Antarctic research hub,” says Wagenkencht, recent recipient of a Fulbright Research Award to conduct research in the area. “Since the Colonial era, it’s been growing into a cosmopolitan area with people of different backgrounds coming and going, especially now since it’s a jumping-off point for travel into Antarctica.

“Musicians in Punta Arenas are becoming climate activists. The direction I’m going with my research now is looking at the many musicians who are changing their artistic focus in the wake of the evolving makeup of that area.”

In addition to her research interests around the evolving Punta Arenas musical scene, Wagenknecht is involved with Soundscapes of the People, a project of the American Music Research Center. Soundscapes is based in Pueblo, Colorado, and is being led by CU ethnomusicologists Susan Thomas and Austin Okigbo, along with CU Boulder alumna Xóchitl Chavez from the University of California, Riverside. The project is documenting the music and culture of Pueblo and the surrounding area, and will result in a digital archive of interviews and performances that will be accessible to the public through the University of Colorado Libraries. Soundscapes was recently awarded a grant from the National Endowment for the Humanities’ Archaeological and Ethnographic Field Research program.

“Pueblo has a rich culture and history, and has a very vibrant music scene,” Wagenknecht says. “It’s a steel mining town, and that brought in workers and others from all over the world.”

As an Engaged Humanities and Arts Scholar, Wagenknecht is also collaborating with K-12 teachers in Pueblo using some of the recordings and interviews from the Soundscapes project to create materials for teachers to use in music classrooms. “I have a soft spot in my heart for K-12 music,” she says. “That’s how I got my start.”

In 2020, she received the Joann W. Kealiinohomoku Award for Excellence at the Rocky Mountain Music Scholars’ Conference. She is president of the Graduate Musicology Society, and has presented her work at national and regional conferences.

In her free time, she serves as a church musician, trains for ultramarathons and works on her self-described “mediocre” rock-climbing skills with her husband Austin, a graduate student in applied math at CU Boulder. He has an interest in the mathematics of music applications and signal processing.

Curiosity drives Wagenknecht. “I’m a curious person and I always want to learn more,” she says. “Doing research about Punta Arenas will allow me to use my skills, training and knowledge to do something that I feel impacts our understanding of how climate change is affecting lots of people. The Soundscapes project will disseminate musical knowledge into classrooms and for public awareness.

“I care about all of this. I care that my research will help us understand something in a more broad-based way that we didn’t understand before.”

Assistant Professor of Composition Annika Socolofsky blends the realms of art and science through the Instrument Design Lab (IDL). The course offers a science-based context to instrumentation, sound and musical creation, giving College of Music students a foundation in the science of music. END_OF_DOCUMENT_TOKEN_TO_BE_REPLACED

It was a busy fall for the American Music Research Center (AMRC)! One of the... END_OF_DOCUMENT_TOKEN_TO_BE_REPLACED

Friends, My heart is heavy. Associate Professor of Violin Charles (Chas) Wetherbee passed away on... END_OF_DOCUMENT_TOKEN_TO_BE_REPLACED
Return to the top of the page