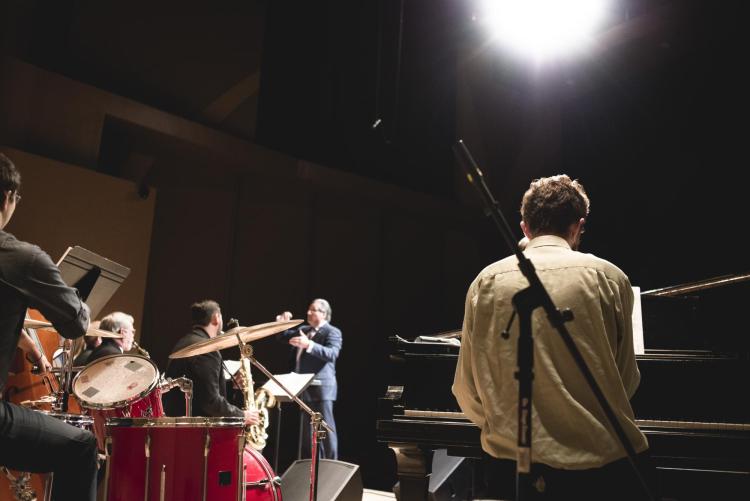 With some 32 years’ experience as an instrumental music teacher in public schools, alumnus Ed Cannava (BME ’77, MME ’80, PhD ’94) is ideally poised to serve band directors as an adjudicator, clinician, conductor and consultant.

Through his Band Resources Unlimited enterprise, Cannava has worked with all kinds of ensembles—from chamber and jazz ensembles to concert and marching bands—at the elementary, middle and high school levels. As an affiliate member of the Metropolitan State University of Denver music education faculty, he taught instrumental music education courses and assisted with conducting concert bands from 2010 to 2014; currently, he’s in his ninth year as director of bands at Regis University (see photo) where he leads a big band jazz ensemble and conducts the concert band.

An erstwhile transfer student from Long Island, Cannava came to CU Boulder in his third year and holds fond memories of completing his undergraduate degree at the College of Music: “I really enjoyed marching band and remember being so excited to perform at the Orange Bowl in ’76.

“I graduated mid-year in December ’77,” recalls Cannava, originally from New York, who now resides in Centennial, Colorado, with his wife, Pat. “And then I landed a mid-year job in the tiny town of Cotopaxi between Salida and Cañon City. It was a small K-12 school, but I got a band program going there—and I met my wife there.”

In fall 1978, Cannava landed a job with Littleton Public Schools, directing instrumental music at Euclid Junior High School for nearly a decade; at the same time, he continued his studies as CU Boulder, earning advanced degrees in music education.

“That was challenging—getting my master’s and doctorate and working full time, plus starting a family at that point,” admits Cannava. “I credit my great relationship with [Professor Emeritus and former Associate Dean of Undergraduate Admissions] Kevin McCarthy, who was my main advisor.” Cannava also cites the late Hugh MacMillan, former band director, and College of Music alumnus and former Assistant Dean Willie Hill as highly influential in his career.

“It’s been a great journey that includes my role as director of bands for Arapahoe High School,” Cannava continues, noting that he held this position for 22 years until his retirement in 2009. Under Cannava’s direction, the Arapahoe Band Program garnered notable accolades—including the Colorado Bandmasters Association (CBA) Exemplary Award for achieving excellence in concert, marching, jazz and chamber music for 11 consecutive years.

“Despite our crazy schedules, we’d always find time to take off as a family and do family trips. We’re a family of teachers and travelers.”

Closer to home, Cannava has been a music education guest presenter at the University of Colorado and the University of Northern Colorado, among other music programs. His many honors and teaching excellence awards include being inducted into the CMEA and CBA Halls of Fame.

Assistant Professor of Composition and Pendulum New Music Director Annika Socolofsky discusses her recent incentive prize and how she perceives her role as a composer, performer and educator. END_OF_DOCUMENT_TOKEN_TO_BE_REPLACED 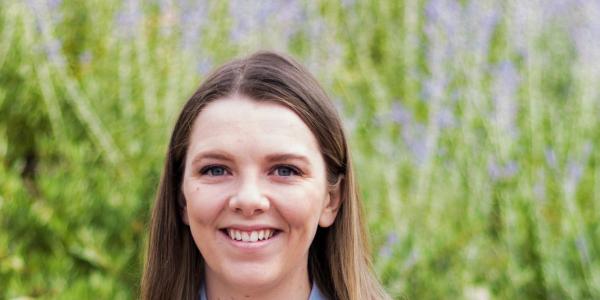 Recent alumna Carrie Proctor always knew she wanted to impact young lives by becoming a music educator. Discover her passion to inspire youths through a shared connection to music. END_OF_DOCUMENT_TOKEN_TO_BE_REPLACED 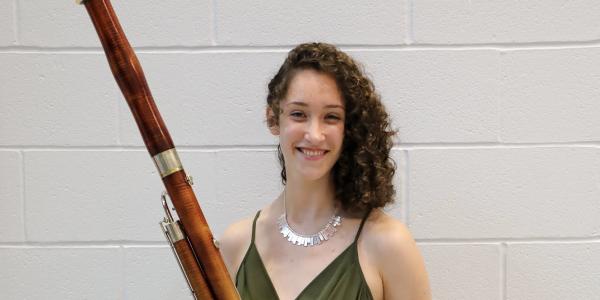 College of Music student ambassador and bassoonist Laynie Metsker recently shared with us—and Future Buffs—her perspectives on becoming a music educator. END_OF_DOCUMENT_TOKEN_TO_BE_REPLACED
Return to the top of the page