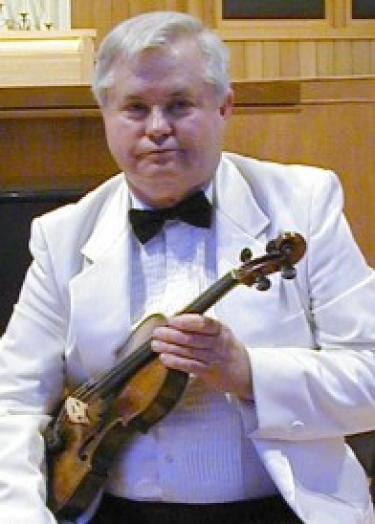 “I’ve had a long and rewarding career in the field of music. I want to say ‘thank you’ to the school and the administration for giving me the opportunity to make my life in music.

“I grew up in a small town in northern Wyoming and was the first student in 20 years coming up through my high school who was interested in classical music. My orchestra director was not a string player […] but in my senior year, he turned my name in to audition for All-State Honor Orchestra. I auditioned and made concertmaster.

“I seemed to impress the All-State orchestra conductor, Eugene Hilligoss [former faculty member of the College of Music], who spoke to my school director who then urged me to apply to CU Boulder […] I was accepted and given a full out-of-state scholarship to major in violin. My career was launched.

“In my senior year, I was concertmaster of the CU orchestra, graduated second in the college academically and played what I was told by my senior recital committee was the ‘best undergraduate recital ever heard at the school.’ I went on to study with some other teachers, switched to viola, was offered an assistantship at CU and came back ‘home’ for my master’s.

“I learned and performed two full recitals in nine months, got my degree and was immediately drafted into the United States Army. I got out of service after two years, including a year in combat in Vietnam. I got shot up a little and hadn’t played my instrument in two years, but I had my master’s recital recordings sent to another school to apply for a doctoral program. I was accepted and got back into the music world.

“Shortly after I came to Tucson, I was introduced to a fledgling nonprofit youth orchestra training program. I saw the potential for doing some good in the world using music as the vehicle … so when I was offered the directorship, I accepted.”

Bourret grew the program from 34 members to 150 members, and from two small ensembles to a six-level program with the top level playing professional string orchestra repertoire. He adds, “I used the chamber music principle as an approach. All six levels rehearse and perform conductorless which develops leadership, teamwork and awareness.

“We have been called one of the best youth music training programs in the United States. I am celebrating because I have completed 50 years as director of Tucson Junior Strings and I still love it.”

Moreover, Bourret teaches some 40 violin and viola students privately each week. In 2008, Bourret was named Outstanding Private Teacher in Arizona by the American String Teachers Association.

Since 1977, Bourret and his wife, Anna, also run a summer chamber music camp—Chamber Music in the Mountains at Echo Glen—for high school and college-level players.

“I'm a ‘happy camper,’” concludes Bourret. “I love music and I love teaching. I dearly love my life and I look forward to every day of music that I have. I thank the College of Music for that. If your school hadn’t taken me in when I came out of high school, I have no idea how I would have ended up. As it is, I have a ‘happy ongoing.’”

Curiosity drives Lydia Wagenknecht, a PhD candidate in ethnomusicology and recent recipient of a Fulbright Research Award. “I care that my research will help us understand something in a more broad-based way that we didn’t understand before,” she says. END_OF_DOCUMENT_TOKEN_TO_BE_REPLACED

We’re so excited to welcome alumnus Damani Phillips back to campus this week and to present him the College of Music’s 2022 Distinguished Alumnus Award at our commencement ceremony on May 5! “The versatile training provided by CU has been the cornerstone of my success to date, and has enabled me to do and be many things well beyond typical expectations,” he says. Meet Phillips and discover his powerful advice to graduating Music Buffs. END_OF_DOCUMENT_TOKEN_TO_BE_REPLACED

On May 5, we look forward to welcoming back Judith Glyde, formerly professor of cello and chamber music at the College of Music and chair of our string faculty. Since retiring in 2014 to live in New York City, the professor emerita she has been active with the college’s alumni community there, offering tremendous support to Forever Buffs who are now living and working in the city. END_OF_DOCUMENT_TOKEN_TO_BE_REPLACED
Return to the top of the page