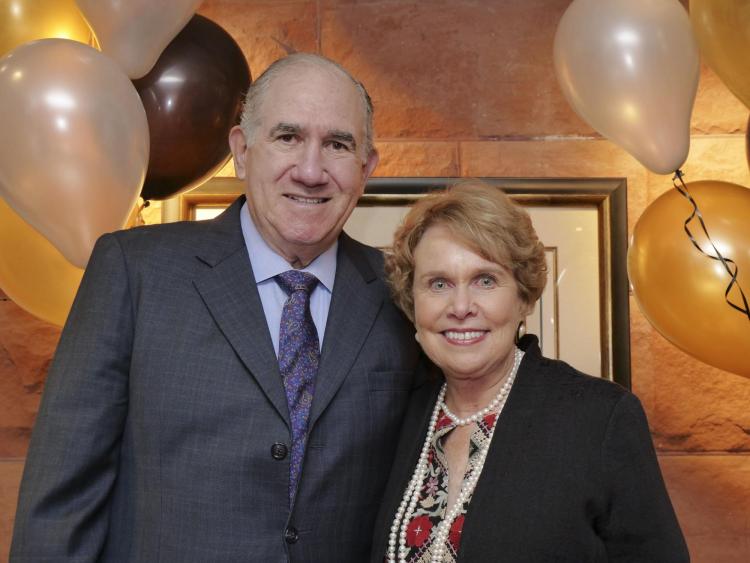 In a roundabout way, the piano brought Dan and Boyce Sher together.

Says Dan: “Even though the realization took me until my junior year in high school, it dawned on me then that I knew I needed to pursue it.”

And Boyce: “Growing up, there was always music in the house. My mother started looking for piano teachers for me early on, and I started taking lessons at age 5.”

Eventually, the pair followed their musical passions to Columbia Teachers College in New York City, where they met and married some 51 years ago.

Now, in recognition of their shared love of the ivories, the Shers have given a gift to name the Sher Collaborative Piano Faculty Studio in the expanded Imig Music Building as part of the music+ campaign.

But anyone even remotely familiar with the College of Music knows it’s just the latest mark of many the couple has left on music study at CU Boulder.

Daniel Sher was born in Brooklyn and grew up in the suburbs of New York City. His grandparents had immigrated from Eastern Europe; Dan says they weren’t able to afford music lessons right away—even though his mother had always wanted to learn to play the piano.

“When they finally had an opportunity to get a piano in the house, my mother started lessons. She wanted me to do the same, so I did.”

After attending a camp for young musicians, Dan says he got hooked and eventually applied to Conservatory of Music at Oberlin College as a piano student. “I was already very interested in chamber music by the time I got to Oberlin,” he recalls. “I was a solo major but I did a lot of chamber study there and continued to go back to that music camp as a faculty counselor.”

He went on to study with Martin Canin and Rosina Lhevinne at The Juilliard School before pursuing the EdD at the Teachers College at Columbia University.

Boyce Reid Sher had music in her blood as a child. “My mother was a singer. She was a minister’s wife, and so she could only sing in the church choir,” Boyce remembers about her early life in the Pittsburgh area.

After starting piano lessons at age 5 with legendary local piano teacher Joseph Esposito, Boyce developed into a prodigy, performing two concertos with the Pittsburgh Symphony at ages 12 and 14 and studying at the Aspen Music Festival and School as a teenager.

“I attended Aspen in its early years. There were dirt roads in downtown Aspen back then,” she recalls.

After earning bachelor’s and master’s degrees at Eastman School of Music, Boyce studied in Rome on a Fulbright scholarship for a year. She returned to the U.S., teaching in and around New York City before enrolling in the same program as Dan at Columbia.

“We got engaged in the spring of 1969, got married in August, and moved to Louisiana right after our honeymoon, just in time for the school year at Dan’s new position,” Boyce says.

The move to Louisiana State University marked the beginning of the first long-term relationship the Shers would have with a noted college town music scene. Dan taught piano performance for 16 years, touring with LSU’s Festival Arts Trio. It wasn’t his only memorable collaboration during that creative time.

“Along with a variety of solo and collaborative performances with my faculty colleagues, the trio performed three different programs every year, touring around the southeast,” Dan recalls. “But during that time Boyce and I also collaborated, playing duet and two-piano recitals.”

The couple’s musical partnership took them around the country for performances, including a premiere at Alice Tully Hall at Lincoln Center. Meanwhile, Boyce built an impressive private piano studio in Baton Rouge.

“I moved into private teaching slowly,” she says. “When you come into a new community, you have to work a while to get your name out there. But Baton Rouge had a very active private piano teaching organization, and eventually I built up a wonderful private class of students.”

As their two sons grew up and the couple’s careers blossomed in Louisiana, an opportunity opened up for Dan to move into a leadership position at the LSU School of Music. It wasn’t something he had really considered before.

“The dean of the School of Music left for another job, so people started asking me if I’d like to serve as acting dean for a year. I said, ‘Are you kidding? I’m a pianist.’

He ended up liking the job so much that he stayed on long term, serving as dean for nine years, from 1984 until 1993. But then the mountains came calling.

“Our son was admitted as an undergraduate at CU at the same time that I was interviewing for the dean position here, but we hadn’t said a word to him about coming here ourselves,” Dan says. “A letter came from CU about my trip out for an interview, and he opened it because he thought it was for him! He was furious at first, but we promised to give him his space when we got out here.”

By the time Dan Sher stepped in as dean of the CU Boulder College of Music in 1993, his career in higher education music had already spanned 24 years. But over the course of the next 20, he would make an indelible mark on the discipline in Colorado, shaping the college we all know today. Among other programs, the Entrepreneurship Center for Music, the BM and DMA in jazz studies and the MM and DMA in collaborative piano were founded during his tenure. But the Shers say it was the relationships they forged over those two decades that had an impact on their lives.

“We feel very fortunate to have been a part of this fabulous college. To watch it continue to succeed has been a great joy,” Dan says.

“The people we’ve met have been wonderful,” Boyce continues. “They’re not just colleagues and donors. They’re people who became great personal friends and enriched our lives.”

Since retiring as dean in 2013, Dan has remained highly involved at the college, teaching arts management and, in 2018, spearheading the launch of the Graduate Certificate in arts administration. He says watching the expanded south wing go up has been thrilling.

“As dean I spent years advocating for a different funding model for bricks and mortar, rather than relying solely on fundraising for the arts,” he says. “Thanks to the advocacy of advisory board chairs Becky Roser and Mikhy Ritter—together with other members of the board—there was a heightened awareness and urgency brought to the conversation. That set the table for Rob to step in as the new dean, and he—with our spectacular advancement team—made it happen.”

And after contributing so much, he says he and Boyce saw this as an opportunity to give yet more to the college. “We felt we were at a point in our lives where we could afford to contribute and help with that campaign. Given the opportunity to name a piano studio, it made all the sense in the world.

“It feels like new vistas are opening for the college.”

Curiosity drives Lydia Wagenknecht, a PhD candidate in ethnomusicology and recent recipient of a Fulbright Research Award. “I care that my research will help us understand something in a more broad-based way that we didn’t understand before,” she says. END_OF_DOCUMENT_TOKEN_TO_BE_REPLACED

We’re so excited to welcome alumnus Damani Phillips back to campus this week and to present him the College of Music’s 2022 Distinguished Alumnus Award at our commencement ceremony on May 5! “The versatile training provided by CU has been the cornerstone of my success to date, and has enabled me to do and be many things well beyond typical expectations,” he says. Meet Phillips and discover his powerful advice to graduating Music Buffs. END_OF_DOCUMENT_TOKEN_TO_BE_REPLACED

On May 5, we look forward to welcoming back Judith Glyde, formerly professor of cello and chamber music at the College of Music and chair of our string faculty. Since retiring in 2014 to live in New York City, the professor emerita she has been active with the college’s alumni community there, offering tremendous support to Forever Buffs who are now living and working in the city. END_OF_DOCUMENT_TOKEN_TO_BE_REPLACED
Return to the top of the page