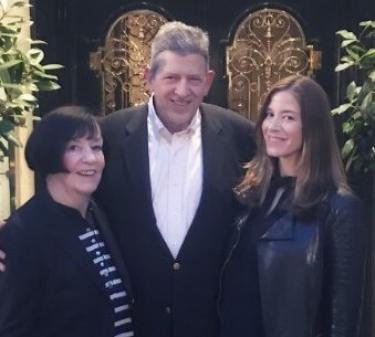 When Peg Rowe was a child, she already had a built-in appreciation for the arts. As a child living in the Washington, D.C. area, she says she fell in love with Degas and Renoir at the National Gallery of Art when she was 5. She would stand there, just staring at the French masters’ work, with no context of who the artists were. She just loved it.

At the time, she thought that was a normal thing for a kid to do. But now, she knows she wouldn’t have had that appreciation if it weren’t for her parents.

“They exposed us to art in so many ways,” Rowe says. “I never thought about it not being there.”

Now Rowe and her husband, Chuck—parents themselves to CU Boulder alumna and former College of Music Assistant Dean for Advancement Courtney Rowe (BA International Affairs '08)—are honoring that legacy of art appreciation with a gift to name the Rowe Practice Room in the expanded Imig Music Building in memory of Rowe’s mother, Margaret M. Steed. It’s the second gift by the family in honor of its musical matriarch; in 2016, the Rowes established the Margaret Steed Memorial Graduate String Quartet Endowment to support the college’s graduate string quartet in-residence.

Peg Rowe says they chose to name a practice room because of her mother’s insistence on practice when Peg was a child.

“It’s a physical way of honoring my mother,” she says. “I can remember when I was learning to play piano, the piano was in the hallway of our house, and I practiced every afternoon. My mother always encouraged practice, and was a believer that that was how you got better.”

But there is more to this family’s musical story than 88 keys in a hallway.

As a child growing up in the Los Angeles area, Margaret Steed was surrounded by the performing arts from a young age. Her father and grandfather designed sets for Hollywood films.

“Long after he retired, my grandfather still had friendships with stagehands in the major LA theatres,” Rowe says. “As a child, he took me to see ‘The Sound of Music’ touring company rehearsing. My mom had that exposure as a child, too.”

Steed’s own passion, though, was for music. She played violin in the prestigious LA Junior Symphony. While she enjoyed music, she never pursued it as a professional path, instead allowing it to underscore everything she did as a mother to Peg and her three siblings.

“My father, Robert, was in the Navy, so we moved every two years until I was in junior high,” Rowe says. “The whole time, my mom raised us to be very appreciative of classical music.”

Rowe grew up under the influence of jazz and Beethoven while the family lived in different port cities in California, Virginia and up the East Coast.

“I played piano as a kid. My sister played piano and guitar, and while everyone in the family loved to sing, she was the one who had a pleasing voice. She studied opera and could have gone on professionally, but chose not to.

“My mom’s influence was strong. She was really intent on ensuring that we had music in our house and had the opportunity for music and dance lessons.”

When Robert retired from the Navy, the family settled in San Diego. In that picturesque landscape, the visual arts also became a part of Rowe’s life.

“I took watercolor classes, and we would go paint by the ocean or the desert. We were always encouraged to participate and would go to concerts and art museums as a family. I’m forever grateful that my parents raised us that way, and Chuck and I made it a priority to provide that for Courtney as well.”

After working for many years in the healthcare industry, Rowe is now a consultant and executive coach. Though, like her mother, her musical pursuits never led to a career, she says her appreciation for the arts has made her who she is.

“I always tell my clients to make music one of their ways to cope or take a break. I think when you have appreciation for the arts—even if you don’t always necessarily like a piece of art—that translates to better cooperation in your career. You’re able to build teams that have different strengths and tap into those.”

And that, she says, is perhaps the most powerful impact her mother had on her life.

“My mom went back to violin after we were grown, joining an adult community orchestra and playing in a string quartet. So music was always a part of her life, and it was important to her as a parent. That was her unique legacy in our family.”

Rowe says her parents would have appreciated the support that CU Boulder and the community have provided to the College of Music’s mission, especially as the Imig Music Building expansion nears completion.

“The idea that funds are being allocated and the building is being improved for the superior education of the students, creating a better learning environment for them to perfect their craft and talent, would have made them happy.”

And she hopes that, in a world of social distancing and live streaming, the beautiful new Imig facade can serve as a welcoming reminder that we will be back together soon.

“As we’re adapting to the challenges of the pandemic and the need to social distance, music is a universal connection,” Rowe muses. “Some of the most moving and inspiring moments have been communities gathering on balconies and singing. Music lifts our spirits and provides comfort.”

Curiosity drives Lydia Wagenknecht, a PhD candidate in ethnomusicology and recent recipient of a Fulbright Research Award. “I care that my research will help us understand something in a more broad-based way that we didn’t understand before,” she says. END_OF_DOCUMENT_TOKEN_TO_BE_REPLACED

We’re so excited to welcome alumnus Damani Phillips back to campus this week and to present him the College of Music’s 2022 Distinguished Alumnus Award at our commencement ceremony on May 5! “The versatile training provided by CU has been the cornerstone of my success to date, and has enabled me to do and be many things well beyond typical expectations,” he says. Meet Phillips and discover his powerful advice to graduating Music Buffs. END_OF_DOCUMENT_TOKEN_TO_BE_REPLACED

On May 5, we look forward to welcoming back Judith Glyde, formerly professor of cello and chamber music at the College of Music and chair of our string faculty. Since retiring in 2014 to live in New York City, the professor emerita she has been active with the college’s alumni community there, offering tremendous support to Forever Buffs who are now living and working in the city. END_OF_DOCUMENT_TOKEN_TO_BE_REPLACED
Return to the top of the page