For Claire Glover (BME ’17)—recipient of the Colorado Music Educator Association’s 2020 Young Music Educator Award—the mentorship she received at the College of Music is key to her success.

“I have an amazing job,” says Glover, director of bands at Mountain Ridge Middle School (MRMS) in Colorado Springs and president/concert band coordinator of the Pikes Peak Middle School Honor Band. “And I have huge gratitude for my mentors.”

Specifically, she counts Associate Director of Bands and Conducting and Music Education Instructor Matthew Dockendorf, Associate Professor of Conducting and Music Education and Associate Dean for Undergraduate Studies and Enrollment Management Matthew Roeder and Professor of Horn Michael Thornton among her influencers and inspirations; as well as College of Music alumni Jack Yonce and Mike Perez.

“When I first started at Mountain Ridge, there were under 300 kids in band,” recalls Glover, 25, whose tenure at the middle school began in August 2017. Since then, that number has grown to 400 participants, translating to the school’s greater participation in the CU Middle School Honor Band. 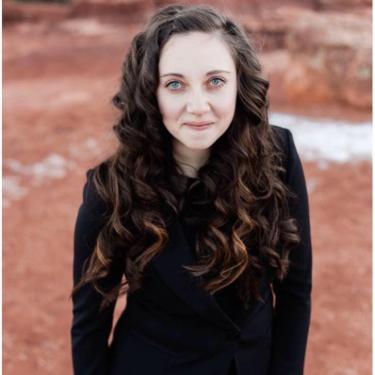 “Buy-in is growing and so is the level of excitement in the Colorado Springs region,” she adds.

Indeed, at MRMS, she has led the concert bands to receive superior ratings at the Colorado Bandmasters Association’s Middle School Concert Band Festival and Cañon City Blossom Festival. Additionally, the 8th-grade symphonic band under her direction was invited to perform at the 2019 CMEA conference, and the MRMS Honors Band received an invitation to perform at this year’s conference.

“I’ve always been a big believer in asking questions and soliciting advice from mentors,” says Glover, who began playing French horn in 6th grade, which ignited her passion for music education. “Mentors are my guideposts … I just spoke with Dockendorf this morning!

“I take feedback easily and welcome it constantly—and I believe that’s a big part of having achieved strong success in a short amount of time.

“I’ve also been really lucky. The administration at Mountain Ridge is great, the parent community is supportive and the kids are to die for—honestly, they’re amazing.”

Continues Glover, “Because my own middle school experience was hugely impactful, I’ve known my path since then. And I know how incredibly important it is to create a culture that really values music ensembles and performance.”

She also credits a “performance mindset” as crucial to her achievements as a conductor. “I’m a good horn player. From Mike Thornton, I learned the importance of being a solid performer.

“I wouldn’t be where I am now without the performance perspective I bring to every band rehearsal. I emphasize both education and excellence in performance.”

Glover concludes, “At this point, I’m just trying to keep up with the passion and drive of my students. I hope to match, inspire and build on their enthusiasm.”

It was a busy fall for the American Music Research Center (AMRC)! One of the... END_OF_DOCUMENT_TOKEN_TO_BE_REPLACED

Friends, My heart is heavy. Associate Professor of Violin Charles (Chas) Wetherbee passed away on... END_OF_DOCUMENT_TOKEN_TO_BE_REPLACED

Longtime Associate Professor of Saxophone Tom Myer retired in May. As the year draws to a close, enjoy his insightful career reflections and advice … and discover what he’s up to now! END_OF_DOCUMENT_TOKEN_TO_BE_REPLACED
Return to the top of the page