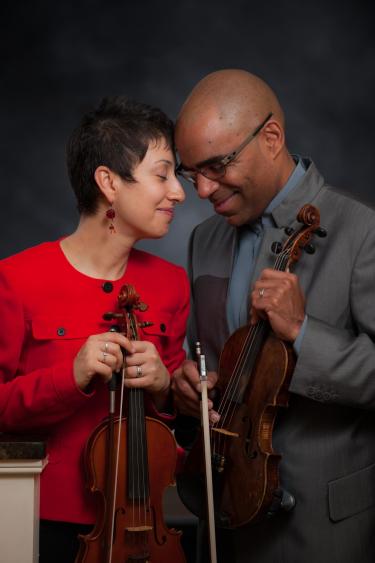 On Tuesday, Feb. 25, the College of Music's third annual Distinguished Lectureship in Music, Diversity and Inclusion comes to Grusin Music Hall with a lecture by social entrepreneurs and arts leaders Aaron and Afa Dworkin. Titled “Throwing the DICE that Fuel Inclusion: A Wager on Diversity, Innovation, Creativity and Entrepreneurship in the Arts,” the Dworkins will dive into the role that diversity and the arts play in society. They’ll also be discussing their work with the Sphinx Organization, a nonprofit dedicated to the development of young black and latinx musicians in the classical sphere.

Aaron and Afa both come from diverse backgrounds, which helped them craft the goals of the Sphinx Organization together.

“As a biracial violinist, my background was a little bit different in that I was adopted by a white Jewish couple,” Aaron says. “Ultimately, I was reunited with my birth parents—my birth father who is a black Jehovah’s Witness and my birth mother who is white Irish Catholic.”

From an early age, Afa’s training stemmed from schooling in the Soviet Union.“I was born in Moscow and grew up in Azerbaijan,” Afa explains. “The concepts of diversity and inclusion were very foreign to me. I was raised to think more about inclusiveness and solidarity, being of ‘one people’.”

Struck by the lack of diversity in classical music, Aaron started to consider ways to do something about it. “I began to question, as a biracial person—and one certainly viewed in America as an African American—and a violinist, why there would be no one of color onstage or in the audience,” he says.

Once the idea was born, Aaron and Afa weighed the importance of conversation and dialogue surrounding diversity, specifically in the classical music field.

“We were looking at prominent communities of color in the country and how they are so starkly underrepresented in our sector. For that reason, we began our work by diversifying from the standpoint of participation of black and latinx young musicians in our field,” Afa explains.

Since then, the Sphinx has undergone a number of changes. “That, of course, quickly grew into the host of programs that talk with students about how to address and impact the community in a sustainable way. That’s led to a growth of those programs,” Aaron says. “About five years ago, I stepped down to serve as dean of the University of Michigan’s School of Music, Theatre & Dance, and Afa, who had already been executive director of the organization and the long standing artistic director, took on the presidency.”

Today, Aaron is a tenured professor of arts leadership and entrepreneurship at the School of Music, Theatre & Dance and professor of entrepreneurial studies at the Stephen M. Ross School of Business at the University of Michigan. Afa continues to serve as president and artistic director of the Sphinx Organization, as well as adjunct professor at Roosevelt University.  She will also teach a course on diversity and inclusion at the University of Michigan this winter.

Now in its third decade of existence, the Sphinx Organization is continually expanding its outreach and investing back into the field through programming in arts leadership and entrepreneurship—a big topic they’ll be discussing during their lecture at CU Boulder.

“As artists, we can engage with communities and impact communities. We’ll talk about the history of how the Sphinx Organization has been able to do that and how to be a cultural entrepreneur,” Aaron explains. “We’ll talk about how to build a sustainable enterprise around one’s art-making and, along with that, how to build a portfolio as someone who is in a creative sphere.”

The Dworkins have also developed programming that targets students in all areas of study, ranging from early education and pre-college careers all the way through college and into career development.

“We’ve looked at and developed new models that serve emerging artists who are on track to become permanent members in American orchestras, those who are young entrepreneurs, and those who are emerging administrators who will hopefully lead from the C-suite standpoint in our field where diversity is still lacking and has been historically lacking,” Afa explains. “We’ve really rounded out our reach and programming to encompass as many of those aspects in our industry that still require work in the space of diversity.”

Having almost become what Afa describes as the “de facto service-to-the-field organization,” the Sphinx Organization captured the attention of former First Lady Michelle Obama. Representatives from the Sphinx were honored at the White House with the 2016 National Arts and Humanities Youth Program Award.

“While we’ve made some important strides, there’s still a lot more work to be done in order for true balance to be achieved,” Afa says. “For us, that is the focus, but, for certain partners and organizations in different parts of the country or even the world, diversity may be defined differently—and that’s OK. Ultimately, we all see success when our field, our sector, will reflect the rich diversity inherent in our communities.”

The College of Music’s third annual Distinguished Lectureship in Music, Diversity and Inclusion is Tuesday, Feb. 25, 2020, at 11 a.m. in Grusin Music Hall. The event is free and open to the public; for more information, visit cupresents.org.

Discovering and playing the music of composers who have been historically marginalized is a wonderful educational experience for all students, regardless of gender or ethnicity, says Professor of Piano Pedagogy Alejandro Cremaschi. END_OF_DOCUMENT_TOKEN_TO_BE_REPLACED

Assistant Professor of Composition and Pendulum New Music Director Annika Socolofsky discusses her recent incentive prize and how she perceives her role as a composer, performer and educator. END_OF_DOCUMENT_TOKEN_TO_BE_REPLACED
Return to the top of the page