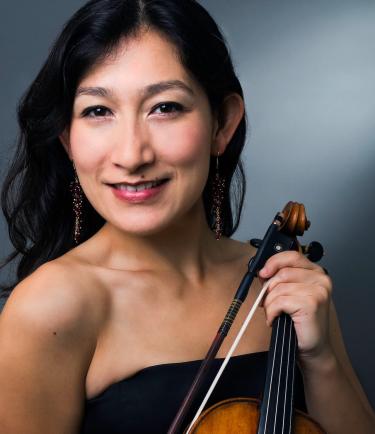 As a young violinist studying at the Juilliard School, Harumi Rhodes watched as many of her classmates formed string quartets of their own. Each group came together for this reason or that, uniting for the common purpose of performing some of the most cherished music ever written.

But as those quartets came and went, Rhodes never found her family of four.

“I always hoped to be in a string quartet. But after a certain time I began to think, ‘What are the chances that four likeminded people—who are complementary and completely devoted to a life in quartet playing—would find one another?’”

Through graduate studies at New England Conservatory, teaching positions at Juilliard and Syracuse University, and a prolific chamber music career as founding member of Trio Cavatina and with the East Coast Chamber Orchestra, Boston Chamber Music Society and Music from Copland House—to name a few—Rhodes made beautiful music and developed an abiding love of teaching, but still the quartet eluded her. “It was with a little bit of sadness that I assumed that the stars would never align in that way.”

Then came the opportunity to teach in the same department as one of the most revered string quartets on the planet.

The prospect of becoming close colleagues with violist Geraldine Walther, cellist András Fejér and violinists Edward Dusinberre and Károly Schranz was thrilling to Rhodes when she came to the College of Music as assistant professor of violin in 2015.

“I’ve been a fan of theirs for as long as I can remember,” Rhodes says. “One of the reasons I always knew about the college was because of the Takács residency. The idea of serving on the faculty alongside them was a huge magnet.”

Over the course of two and a half years, Rhodes performed with the quartet a number of times, including at the Ravinia Festival and for Austin Chamber Music. Then in February 2018, Schranz announced that after more than 40 years with the quartet—which he co-founded with Fejér, Gábor Takács Nagy and Gábor Ormai—he would retire at the end of that season. 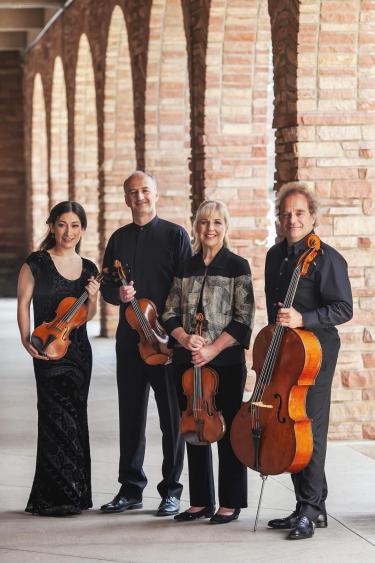 And Rhodes was named his successor as second violinist. “I was beyond excited. One of the things I’ve always admired about the Takács is their warmth of sound, their playful and spontaneous playing. I’ve always been very attracted to that philosophy of string quartet playing.”

Especially Schranz, she says, whose shoes she is honored to fill. “He’s a musical hero of mine. So to be sitting in his chair is mindblowing.”

Rhodes played her first concerts as the Takács Quartet’s second violinist last summer in London, Vienna and New York. She says the part suits her personality perfectly. “The position is multifaceted. You have to know when to come out and be an individual, when to support and make other people shine, when to blend, how to provide color and harmony and melody and rhythm,” she explains.

You could say it’s a role she was born to play: Rhodes’ mother, Hiroko Yajima, was second violinist of the Galimir Quartet for more than 20 years, while her father, Samuel Rhodes, played viola in the Juilliard Quartet for four decades. “I think there’s something about the role of the second violinist. I relate to it in terms of my own temperature and personality. Leading from within and being inside the texture, that’s my own temperament.”

It seems fitting, then, that she join a group known for its unique style—at once unified yet individual, and always displaying the utmost skill and understanding of the works it presents.

“Many great composers chose the string quartet as the ultimate medium to express their most intimate and complex ideas. But quartet playing is a different animal. It’s not something that people program casually. The idea of having a life of playing this repertoire is a dream come true.”

Despite a demanding worldwide performance schedule, Rhodes is pleased to be able to continue to teach violinists at the College of Music. It’s a busy life she enjoys with gratitude and excitement, as this longtime admirer of the string quartet finally finds her own.

“When you have three other people by your side, and you’re all immersed in what you consider to be one of the utmost artforms, exploring it together, it feels like a group mission. You’re tied together by this sense of love and shared values for something larger than yourselves.”

Rhodes still teaches in her tenure-track position at the College of Music; Schranz now plays a larger teaching role as senior instructor of violin.

To read more about our faculty members' work from the past year, check out the 2018 edition of Colorado Music Magazine >>

Curiosity drives Lydia Wagenknecht, a PhD candidate in ethnomusicology and recent recipient of a Fulbright Research Award. “I care that my research will help us understand something in a more broad-based way that we didn’t understand before,” she says. END_OF_DOCUMENT_TOKEN_TO_BE_REPLACED

We’re so excited to welcome alumnus Damani Phillips back to campus this week and to present him the College of Music’s 2022 Distinguished Alumnus Award at our commencement ceremony on May 5! “The versatile training provided by CU has been the cornerstone of my success to date, and has enabled me to do and be many things well beyond typical expectations,” he says. Meet Phillips and discover his powerful advice to graduating Music Buffs. END_OF_DOCUMENT_TOKEN_TO_BE_REPLACED

On May 5, we look forward to welcoming back Judith Glyde, formerly professor of cello and chamber music at the College of Music and chair of our string faculty. Since retiring in 2014 to live in New York City, the professor emerita she has been active with the college’s alumni community there, offering tremendous support to Forever Buffs who are now living and working in the city. END_OF_DOCUMENT_TOKEN_TO_BE_REPLACED
Return to the top of the page