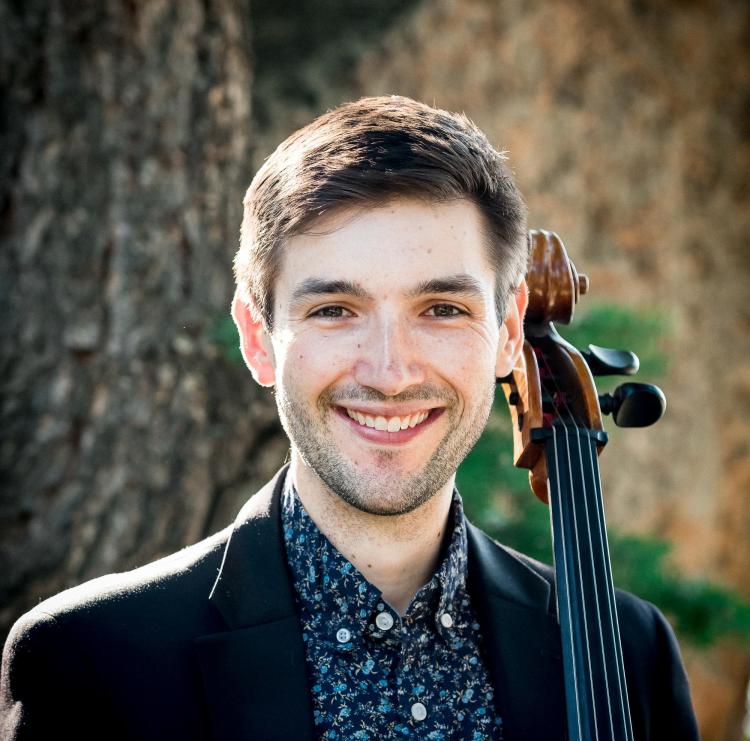 “For me, fear doesn’t necessarily mean you shouldn’t do something. It might mean finding the courage to step into it,” says cellist Andrew Briggs.

Praised as “an artist with an already expanding reputation and great future” (The Well-Tempered Ear), the 28-year-old Colorado native has made a splash locally and is the current recipient of the Harriet Hale Woolley Scholarship from the Fondation des États-Unis in Paris, France.

“It’s a scholarship for American artists,” explains Briggs, who earned the College of Music’s Outstanding Graduate Award, having excelled in his studies here with Professor of Cello Judith Glyde. “The scholarship funds a nine-month project based on some aspect of French culture. My project is focused on the cello études of Jean-Louis Duport, a prominent French cellist of the late 18th and early 19th centuries.”

“I’m studying French cello playing with a focus on bowing technique through the études of Duport,” continues Briggs, who also earned a master’s degree at The Juilliard School, a doctorate at the University of Wisconsin-Madison and a diploma from the Schola Cantorum de Paris. “Duport was one of the first cellists in France to describe how to play with the Tourte [or modern] bow, and his ideas led to a lineage of French string playing. I’m working on these ideas with Professor of Cello Daniel Grosgurin at the Schola Cantorum and the Geneva Conservatory in Switzerland.”

The scholarship also entails monthly recitals with Briggs’ colleagues in the program—emphasizing the works of Duport, as well as Claude Debussy and Francis Poulenc—culminating in a final solo recital in June 2019. He’s well-prepared, given his most recent stints as section cellist of the Colorado Symphony and principal cellist of the Crested Butte Music Festival this summer. Previously, he performed in a number of other festivals (including the Colorado Music Festival and the Aspen Music Festival), with several more orchestras, as a member of numerous trios and quartets and as a soloist—both nationally and internationally. He’s also been awarded a series of prestigious fellowships and appointments, including that of Lecturer of Cello and Music Business at the University of Wisconsin-Oshkosh.

Briggs credits the “amazing faculty” at the College of Music as key to his development as a well-rounded artist. “Judith Glyde, Associate Professor of Viola Erika Eckert and all the string faculty—and the Takács Quartet—are at such a high level,” he says. “I remember such great insights from Gerry Walther [Takács violist] … The quartet is one of the best groups in the world!

“The same goes for the really great coaches in the Collaborative Piano program, including Margaret McDonald and Alexandra Nguyen.” Briggs says he also greatly benefited from the experience and insights of young quartets in-residence—including the Tesla Quartet, in residence at the College of Music during Briggs’ studies here. At the time, and as a dedicated performer of all eras of music, Briggs went on to win the college’s Honors Competition and performed Antonin Dvořák’s Cello Concerto with the CU and Longmont symphonies.

“I remember how gracious, respectful and helpful Gary Lewis was,” says Briggs of the college’s longtime director of orchestras and professor of music. “I did an independent study with him on orchestral excerpts which really helped prepare me for auditions, like Aspen and Juilliard.”

Briggs—who started private cello lessons in 7th grade—balances his performance career with teaching. As an educator, he was involved with The Juilliard School’s Educational Outreach Department, performing outreach concerts as a Gluck Community Service Fellow and teaching at the Harlem School for the Arts as an Arts Enrichment Fellow. He also taught in the classroom at Juilliard as an Ear Training Teaching Fellow, while mentoring the Juilliard Pre-College String Ensemble.

“Over the course of my education, there were definitely ups and downs,” concludes Briggs. “There were lots of successes, but also lots of disappointments and rejections. I learned to take it all in stride and to remain unwavering in my decision to do what I’m doing.

“Someone once said ‘follow your fear’ … I’ve been thinking about that this year. What I’ve found is that whenever there’s something I really want—but maybe it feels even slightly beyond what I think I can do—I feel vulnerable and afraid. But if I go for it anyway, even if things don’t work, I always learn something.

“For me, fear doesn’t necessarily mean you shouldn’t do something. It might mean finding the courage to step into it.”

Briggs’ doctoral project—“Piatti and the Body: An Integrative Approach to Learning the 12 Caprices, Op. 25”—can be found on YouTube.

Curiosity drives Lydia Wagenknecht, a PhD candidate in ethnomusicology and recent recipient of a Fulbright Research Award. “I care that my research will help us understand something in a more broad-based way that we didn’t understand before,” she says. END_OF_DOCUMENT_TOKEN_TO_BE_REPLACED

We’re so excited to welcome alumnus Damani Phillips back to campus this week and to present him the College of Music’s 2022 Distinguished Alumnus Award at our commencement ceremony on May 5! “The versatile training provided by CU has been the cornerstone of my success to date, and has enabled me to do and be many things well beyond typical expectations,” he says. Meet Phillips and discover his powerful advice to graduating Music Buffs. END_OF_DOCUMENT_TOKEN_TO_BE_REPLACED

On May 5, we look forward to welcoming back Judith Glyde, formerly professor of cello and chamber music at the College of Music and chair of our string faculty. Since retiring in 2014 to live in New York City, the professor emerita she has been active with the college’s alumni community there, offering tremendous support to Forever Buffs who are now living and working in the city. END_OF_DOCUMENT_TOKEN_TO_BE_REPLACED
Return to the top of the page