And then they practiced some more.

For 14 College of Music graduate and undergraduate students and one recent grad—that’s how you get to Carnegie Hall.

On Monday evening, Nov. 7, music at CU Boulder will be well represented on the East Coast when the College of Music puts on a showcase concert at Carnegie Hall’s Weill Recital Hall. Alumni, family, faculty and friends will converge on Midtown Manhattan for an unforgettable evening of inspiring new works and virtuosic classics.

“By presenting our top students at Carnegie Hall, we're letting the world know—first and foremost—that they are ready for this,” says College of Music Dean Robert Shay.

On the heels of April’s Boettcher Hall concert in Denver, the Weill Hall performance represents one of the key elements of the College of Music Advantage: providing professional-level experiences for students.

“Opportunities like this Carnegie performance exemplify the edge we want to give to all our students,” Shay says. “We expect to present many more concerts like this in the future, in New York and elsewhere, but it's highly fitting we start at Carnegie, given what a debut there has meant through the years to so many of the world's greatest musicians.”

For the student musicians, the reality of playing in front of a New York crowd in one of the most enduring venues in the world is just starting to sink in. 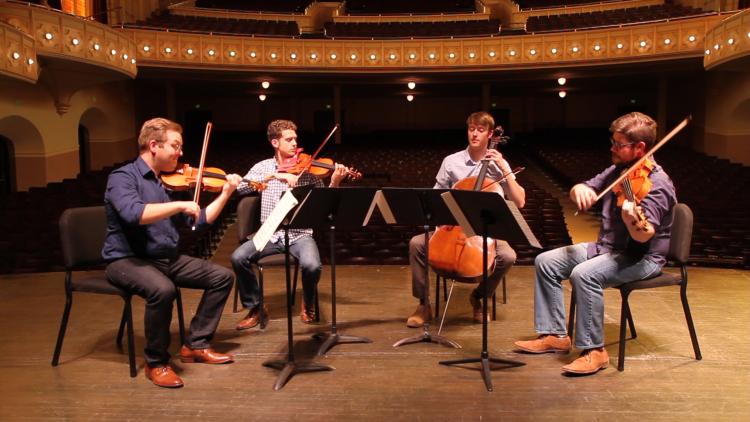 “A performance like this is one that gives you a real sense of legitimacy forever,” says Altius Quartet cellist Zachary Reaves.

Reaves and the other members of the Fischoff Competition silver medalist Altius headline the program. It won’t be their first time at Carnegie: they sat in the audience as their mentors, the world-renowned Takács Quartet, perform there.

“It was before we came to CU to study with them,” says Reaves. “It was inspiring to see them in that setting.”

Still, it’ll be their first time taking that intimate stage, and the graduate quartet-in-residence will take this opportunity to make a splash in New York.

“It’s one of the most famous concert halls for a reason. Adding your name to the list of artists who have performed there adds a unique sense of pressure. We’re going to raise our game.”

At Weill Hall, the Altius performs movements from Mendelssohn’s A-minor string quartet and Shostakovich’s String Quartet No. 9 in E-flat Major.

They’ll also bring a relatively new piece to the stage—written by a CU Boulder alumnus. 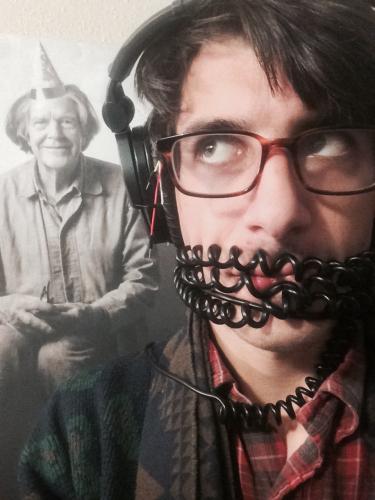 Composer JP Merz describes his “through fog” as an energetic and hopeful piece—perfect for introducing New York to the pioneering Colorado state of mind.

“The title came to me last January, as I drove back to Boulder after winter break in dense fog,” Merz explains. “The long drive took on a tone of perseverance through tough and hazy times. And triumph over the same hazy, unclear texture comes out in the piece.”

“It shows off the capabilities of the instruments and includes some unusual combinations,” Merz adds.

Having just graduated in May, Merz says hearing one of his pieces performed in Carnegie Hall will be encouraging as he embarks on his career. “As a student, you’re always searching for validation for your work. This feels like a really validating moment for me.” 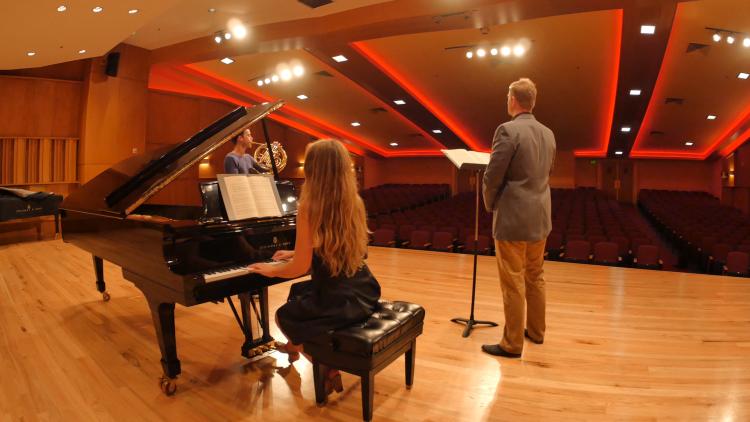 Tenor Michael Hoffman brings Schubert’s “Auf dem Strom” to the hall—a piece he says is perfect for the relative close quarters of Weill.

“In a large space, you wouldn’t have the intimacy that this piece calls for,” Hoffman explains. “It’s meant to be performed in a much smaller setting, where you can get close to the audience.”

Hoffman will be joined on stage by Benjamin Anderson, horn, and Emily Alley, piano. He says the story of loss and loneliness—written by Schubert as a farewell to Beethoven—is told beautifully by the melancholy voice of the horn.

"A common theme in lieder is unrequited love. Schubert uses the subtle undertones of this as an ode to Beethoven's influence on his musical development,” Hoffman explains. “The horn is the voice of heroic death and memories of the narrator's love, the piano paints the landscape of the varying intensities of the river and I depict the narrator's journey down the river."

Hoffman has his eyes on a chamber music performance career, and he says performing on the Weill Hall stage represents a milestone in his musical life.

"Music is the one thing that’s always brought the different people in my life together, from small-town Minnesota hunters and fishermen to the people I’ve met all around the world. I know I am in the right profession when my greatest passions can bring together those I love the most." 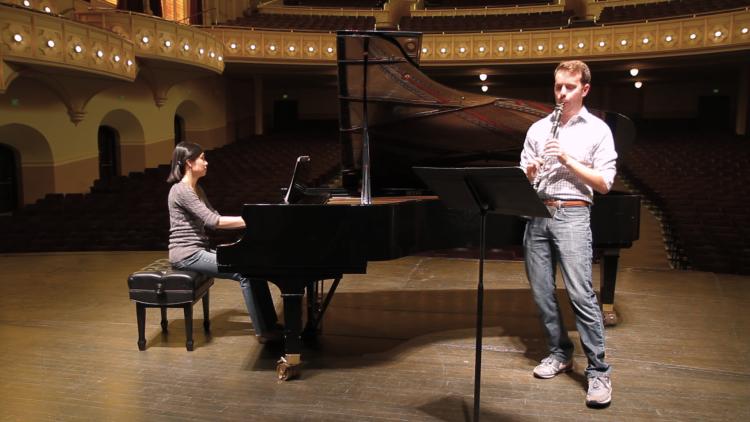 In contrast to the lyrical Schubert, clarinetist Kellan Toohey is set to thrill audiences with German composer Jörg Widmann’s “Fantasie.”

A clarinetist himself, Widmann wrote “Fantasie” early in his career; it’s considered one of the most challenging and innovative works in the clarinet repertoire. Toohey couples the piece with two movements from Carl Maria von Weber’s “Grand Duo Concertant,” which he performs with pianist Cecilia Lo-Chien Kao. Widmann took cues from Weber when composing “Fantasie,” making them the perfect pairing of romantic and modern clarinet themes.

“I think it’s a great variety of music and shows off a lot of different colors and contrasts,” Toohey says about the pieces. “I’ve wanted to play in Carnegie Hall since I was a kid, and I hope people leave the concert inspired.

“We can’t thank the College of Music enough for organizing this opportunity for us.” 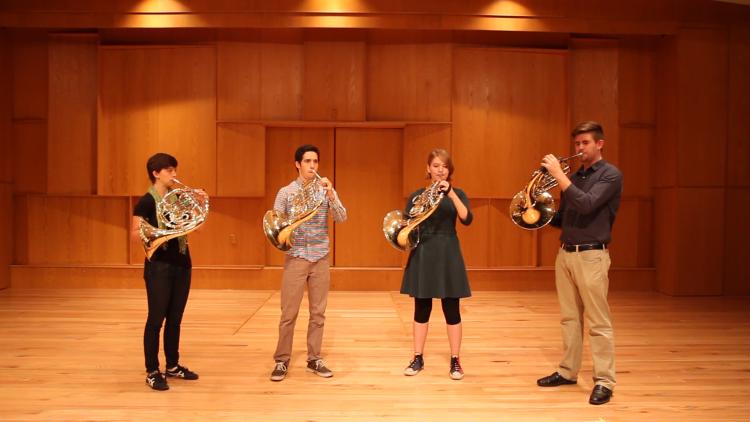 CU Boulder’s horn quartet performs a newer work as well: Western composer Kerry Turner wrote “Fanfare for Barcs” in 1989 to commemorate the success of the American Horn Quartet at a competition in Barcs, Hungary.

The fanfare opens the concert, in a way commemorating Colorado’s introduction to the East Coast’s most legendary venue.

“It’s celebratory and exciting and a little bit loud,” says Jordan Miller, a member of the horn quartet. “And the horn is the perfect voice to kick off the concert.”

Miller says that in order to get the most mileage out of “Barcs” and to fully prepare for Weill Hall, Associate Professor of Horn Michael Thornton set up a coaching session for the group with a member of a different quartet—Takács Quartet violinist Edward Dusinberre.

“It was incredible to get a chance to work with him,” Miller says. “He’s one of the best chamber musicians in the world and we’re lucky to have had that opportunity.”

Every member of the horn quartet hails from Colorado. 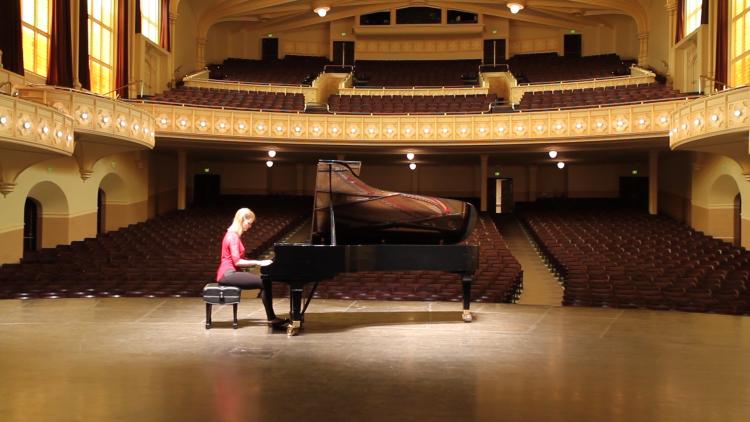 Rounding out the program, pianist Grace Burns gives life to one of Liszt’s most artistically interesting and beloved etudes, the Transcendental Étude No. 11 in D-flat. Full of chromatic harmonies, broken chords and full octave jumps, it’s also challenging.

“Liszt’s works are almost always characterized as virtuoso,” Burns says, “but this piece also shows off the side of him that’s so beautiful, and I wanted to do something more personal for this setting.”

Burns isn’t the only member of her family putting on the show of a lifetime in New York this November: Just the day before she takes the stage at Weill, she’ll be on the sidelines at the New York Marathon.

“My father in law is running the marathon, so I have several family members in town already. It was a happy coincidence,” she says.

With their repertoire set and rehearsals taking place as often as possible, the performers say their goal as they prepare for Carnegie is to represent the diverse talent of the College of Music and leave the audience on Nov. 7 with a sense of just how special the music scene is in Boulder.

“We want them to feel that they went on a musical journey with us through all the different ensembles,” says Hoffman. “If they’re thinking, ‘Boy, that school really has some incredible musicians and we should seek them out,’ that would be the ultimate goal.”

The University of Colorado Boulder College of Music Showcase is Monday, Nov. 7 at 8 p.m. in Weill Recital Hall. Tickets are $40.

Curiosity drives Lydia Wagenknecht, a PhD candidate in ethnomusicology and recent recipient of a Fulbright Research Award. “I care that my research will help us understand something in a more broad-based way that we didn’t understand before,” she says. END_OF_DOCUMENT_TOKEN_TO_BE_REPLACED

We’re so excited to welcome alumnus Damani Phillips back to campus this week and to present him the College of Music’s 2022 Distinguished Alumnus Award at our commencement ceremony on May 5! “The versatile training provided by CU has been the cornerstone of my success to date, and has enabled me to do and be many things well beyond typical expectations,” he says. Meet Phillips and discover his powerful advice to graduating Music Buffs. END_OF_DOCUMENT_TOKEN_TO_BE_REPLACED

On May 5, we look forward to welcoming back Judith Glyde, formerly professor of cello and chamber music at the College of Music and chair of our string faculty. Since retiring in 2014 to live in New York City, the professor emerita she has been active with the college’s alumni community there, offering tremendous support to Forever Buffs who are now living and working in the city. END_OF_DOCUMENT_TOKEN_TO_BE_REPLACED
Return to the top of the page