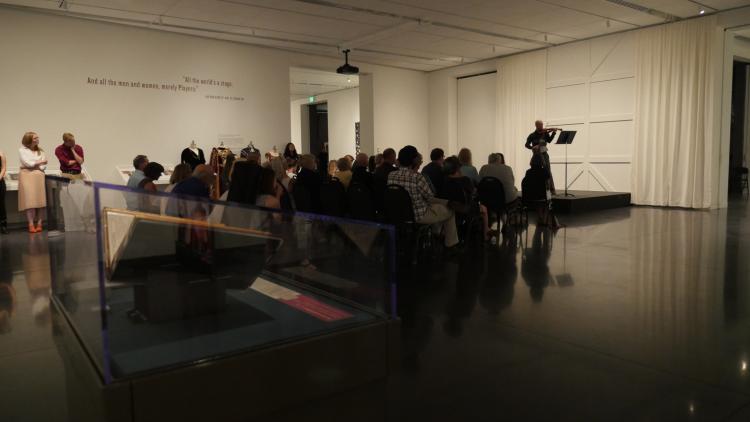 This month, the University of Colorado Boulder plays host to the earliest complete published collection of William Shakespeare’s plays during the exhibition "First Folio! The Book that Gave Us Shakespeare." Fittingly, faculty and students from the College of Music will play their part by celebrating four centuries of music inspired by the Bard’s works.

A colloquium and two special Faculty Tuesday performances are planned for the week of Aug. 29, featuring musicology, keyboard and voice faculty shedding light on both the world-famous and lesser-known musical takes on the stories and characters that have come to define western theater since Shakespeare’s time.

In many ways, they’ve helped define music as well.

“What’s so compelling about Shakespeare to musicians and composers are the plots,” says Associate Professor of Musicology Carlo Caballero. “Whether it’s 'Macbeth,''Hamlet' or 'Romeo and Juliet,' composers didn’t have to speak English or understand the nuance of the verse or the finesse of the poetry to recognize the theatricality of the story. It’s much more elemental, and that’s what naturally seduces musicians.”

Caballero and Professor of Musicology Jeremy Smith delve into Shakespeare’s influence on the music of his time and subsequent generations during “Shakespeare and Music” on Monday, Aug. 29. College of Music Dean Robert Shay hosts the colloquium.

Smith, whose musical research has focused on composer William Byrd, is well versed in the interplay of the English Renaissance master’s music and Shakespeare’s words. In his portion of the colloquium, he’ll focus on an audience favorite, "Romeo and Juliet."

“Behind the paper will be the idea that Shakespeare used some of the techniques that Byrd used in his music to put to together his texts,” Smith says. “Specifically, I’ll study the way the composer told a story compared to the way Shakespeare tells Romeo and Juliet’s story in Act I.”

The musical influence of this and other Shakespeare stories, Smith points out, is hard to pinpoint until after the Bard’s time. “What I want to get into is what Shakespeare himself thought about music,” he says. “We actually know very little today about the specific music played on the stage during the original performances of his plays.”

Conversely, Caballero’s focus will be on the treatment of Shakespeare’s stories in music after his time, particularly in 18th- and 19th-century France. “His plays have been a universal resource for musicians from around 1800 to the present,” Caballero says.

The new role of the First Folio as an artifact rather than a read and page-turned book inspired Caballero’s choice of source material.

“It’s odd to not be able to leaf through the folio … to just view one page of it underneath glass. So in that spirit I’m going to talk about another book: Shakespeare’s plays translated into French in the 18th century,” he explains.

“Both books are artifacts with a historical charge. They’re agents of Shakespeare’s reputation and reception by subsequent cultures. I’ll use the books to work through why people are interested in old books, music and stories.”

The performing faculty will get in on the event, too. The Takács Quartet will perform a Beethoven string quartet inspired by the tomb scene in "Romeo and Juliet" during its concerts on Aug. 28 and 29. And during the second Faculty Tuesday concert of the season, the voice department presents “Sweet Harmony.” Featuring Jennifer Bird, Leigh Holman, Abigail Nims, Matthew Chellis, Patrick Mason and Jeremy Reger on piano, the program includes art songs and opera excerpts in multiple languages by great composers such as Berlioz, Gounod, Strauss, Korngold and Quilter, all inspired by the Bard’s texts.

Then, during a special Faculty Tuesday event on Thursday, Sept. 1, the keyboard faculty reaches deep into the catalogs of Mendelssohn, Liszt, Prokofiev and others to present some of the rarest Shakespeare-influenced pieces during “Give Me Some Music.”

“We didn’t want to go with the standards,” says Associate Professor of Piano Jennifer Hayghe. “It’s a varied program with some unusual chamber pieces.”

Among other works on the program, Alejandro Cremaschi, David Korevaar, Alexandra Nguyen and Andrew Cooperstock perform an eight-hands version of Tchaikovsky’s "Romeo and Juliet Overture." There will also be two premieres: Clarinet professor Daniel Silver will join Cremaschi for the first performance of the bass clarinet transcription of a piece by late Professor Emeritus Luis Jorge Gonzalez, and David Korevaar will premiere his solo piano transcription of Liszt’s symphonic poem "Hamlet."

Hayghe will perform two movements of Prokofiev’s take on "Romeo and Juliet"; cellist David Requiro will be featured as well.

Hayghe says the keyboard faculty were thrilled to have the opportunity to perform as a unit. “It’s our first chance to do something all together, so we couldn’t pass it up.”

And they’re not only collaborating as a department: the College of Music is collaborating with the entire university during the month the First Folio is in town, sending student soloists and small ensembles to perform at the CU Art Museum exhibit. Smith says that interdisciplinary exposure was a big factor in the decision to be involved.

“Dean Shay saw an opportunity for us to come together and share the same focus as the rest of the university community. It’ll be great to add that musical perspective and be part of something big.”

The "First Folio! The Book that Gave Us Shakespeare" exhibition, on tour from the Folger Shakespeare Library, is at the CU Art Museum through Aug. 31. For more information, visit the Shakespeare at CU website.

Curiosity drives Lydia Wagenknecht, a PhD candidate in ethnomusicology and recent recipient of a Fulbright Research Award. “I care that my research will help us understand something in a more broad-based way that we didn’t understand before,” she says. END_OF_DOCUMENT_TOKEN_TO_BE_REPLACED

We’re so excited to welcome alumnus Damani Phillips back to campus this week and to present him the College of Music’s 2022 Distinguished Alumnus Award at our commencement ceremony on May 5! “The versatile training provided by CU has been the cornerstone of my success to date, and has enabled me to do and be many things well beyond typical expectations,” he says. Meet Phillips and discover his powerful advice to graduating Music Buffs. END_OF_DOCUMENT_TOKEN_TO_BE_REPLACED

On May 5, we look forward to welcoming back Judith Glyde, formerly professor of cello and chamber music at the College of Music and chair of our string faculty. Since retiring in 2014 to live in New York City, the professor emerita she has been active with the college’s alumni community there, offering tremendous support to Forever Buffs who are now living and working in the city. END_OF_DOCUMENT_TOKEN_TO_BE_REPLACED
Return to the top of the page