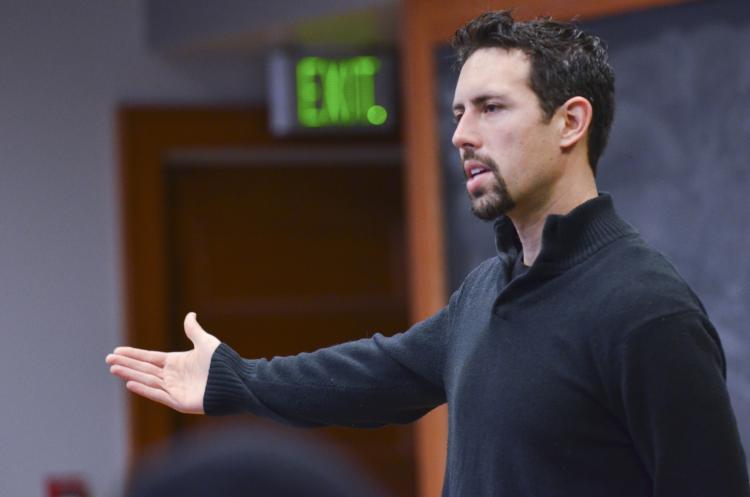 This fall, the College of Music welcomes a familiar face to the musicology faculty full time. Benjamin R. Teitelbaum will join the department as an Assistant Professor of Ethnomusicology.

“The College of Music as a whole is world renowned, and its musicology faculty is one of the most dynamic in the broader region,” says Teitelbaum. “Being invited to join such a community of excellence is a dream come true.”

Teitelbaum has been teaching classes in the College of Music for the past several years, in his position as Instructor and Head of Nordic Studies in the Department of Germanic and Slavic Languages and Literatures.

Prior to earning a PhD from Brown University, with additional studies at the Royal College of Music, Stockholm and Harvard University, Teitelbaum earned a bachelor’s degree from Bethany College. His undergraduate degree focused on, of all things, nyckelharpa.

“The nyckelharpa is Sweden’s unofficial national instrument,” he explains. “I learned to play trap set, banjo, mandolin and fiddle as a child, but music became a more serious pursuit when I began studying nyckelharpa in middle school.”

Teitelbaum spent high school and college traveling back and forth between Sweden and the U.S. learning to play the instrument and Swedish folk music. It was then that he began to realize that he not only enjoyed performing, but scholarship as well.

“I was especially interested in the ways research could increase awareness and understanding of less understood traditions and aspects of musical experience, and for that reason I turned toward ethnomusicology.”

Teitelbaum will also serve as Coordinator of Non-Major Studies, a role he will relish.

“While I am looking forward to working with student performers and scholars, I am also excited to participate in efforts to expand the study of music throughout the broader university,” he says.

Teitelbaum has been published in several major European and American media outlets in addition to scholarly venues. His first manuscript, Lions of the North: Sounds of the New Nordic Radical Nationalism, is forthcoming from Oxford University Press.

It was a busy fall for the American Music Research Center (AMRC)! One of the... END_OF_DOCUMENT_TOKEN_TO_BE_REPLACED

Friends, My heart is heavy. Associate Professor of Violin Charles (Chas) Wetherbee passed away on... END_OF_DOCUMENT_TOKEN_TO_BE_REPLACED

Longtime Associate Professor of Saxophone Tom Myer retired in May. As the year draws to a close, enjoy his insightful career reflections and advice … and discover what he’s up to now! END_OF_DOCUMENT_TOKEN_TO_BE_REPLACED
Return to the top of the page