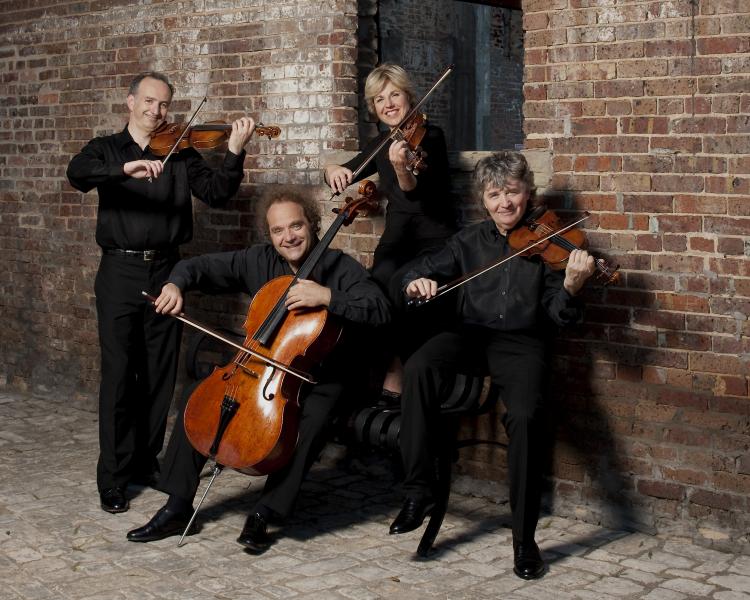 The quartet’s November and December performances of “Strong Language,” a multi-movement piece co-commissioned by Baltimore’s Shriver Hall and Carnegie Hall, were met with widespread acclaim.

In Baltimore, the Boulder-based quartet met with Andres in person for the first time.

“In rehearsals we had been going a certain direction with it, and it turned out to be different direction than what Timo had in mind,” Takács Quartet violist Geraldine Walther says. “He liked our ideas, though, and so the piece ended up really evolving with each concert.”

The piece got its second premiere at New York City’s iconic Carnegie Hall. “(The performance) was a delight,” writes New York writer Harry Rolnick on the classical music website ConcertoNet.com.

After the premieres, the quartet took “Strong Language” to Ann Arbor, Michigan, and Boston.

“The Takács Quartet … is known for many things: its expressive unanimity, its rhythmic acuity, its robust yet nuanced sound,” says Boston Globe reviewer Steve Smith. “When such a group champions a living composer, you pay attention.”

Walther describes “Strong Language” as a unique piece made up of three movements that are by turns refreshingly simple, tense and avant garde, and truly beautiful.

“What’s really refreshing about (Timo) is that he doesn’t take himself too seriously,” she says. “But he also has something to say and he’s not afraid to say it; he doesn’t try to water it down for the audience.”

The Takács Quartet has achieved international recognition for its recordings of centuries-old classical music, but it still finds time to collaborate regularly with contemporary composers. The group has commissioned pieces from CU-Boulder composers Daniel Kellogg and Carter Pann.

“The wonderful thing about contemporary composers is that they give a unique view of here and now, of our culture, of the world as they see it,” Walther says. ”It’s sort of like a moment in time, as is any piece by Beethoven or Mozart or Haydn.”

In addition to the successful premieres, the Takács Quartet has yet another triumph to celebrate this holiday season: a Grammy nomination. Its latest disc of Shostakovich pieces, recorded with pianist Marc-André Hamelin, is shortlisted in the Best Chamber Music/Small Ensemble Performance category.

The quartet returns to CU-Boulder in 2016 for two performances on Jan. 10 and 11 in Grusin Music Hall. The group will play selections by Beethoven, Janáček and Elgar. For more information, visit cupresents.org.

Curiosity drives Lydia Wagenknecht, a PhD candidate in ethnomusicology and recent recipient of a Fulbright Research Award. “I care that my research will help us understand something in a more broad-based way that we didn’t understand before,” she says. END_OF_DOCUMENT_TOKEN_TO_BE_REPLACED

We’re so excited to welcome alumnus Damani Phillips back to campus this week and to present him the College of Music’s 2022 Distinguished Alumnus Award at our commencement ceremony on May 5! “The versatile training provided by CU has been the cornerstone of my success to date, and has enabled me to do and be many things well beyond typical expectations,” he says. Meet Phillips and discover his powerful advice to graduating Music Buffs. END_OF_DOCUMENT_TOKEN_TO_BE_REPLACED

On May 5, we look forward to welcoming back Judith Glyde, formerly professor of cello and chamber music at the College of Music and chair of our string faculty. Since retiring in 2014 to live in New York City, the professor emerita she has been active with the college’s alumni community there, offering tremendous support to Forever Buffs who are now living and working in the city. END_OF_DOCUMENT_TOKEN_TO_BE_REPLACED
Return to the top of the page