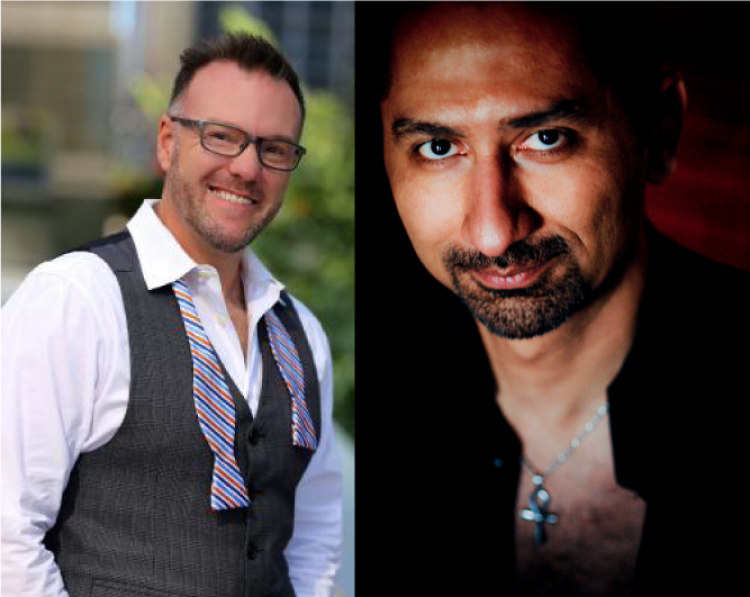 Eklund Opera’s performance of Gioachino Rossini’s “La Cenerentola” (“Cinderella”) this weekend will feature some familiar faces and some new ones, both onstage and behind the scenes. Renowned stage director Bill Fabris will direct, Assistant Professor of Voice Matthew Chellis will play “Don Ramiro” on Saturday and College of Music alum Ashraf Sewailam (BM ’94, MM ’96, DMA ’98) will play “Alidoro” on Friday and Sunday.

Fabris has been directing operas since 1987. Based in New York, he spends most of the year on the road. He last did “La Cenerentola” 10 years ago in San Antonio, but he estimates he’s done about 100 other productions since then. “To refamiliarize myself with ‘La Cenerentola,’ I popped in the CD, and watched the score and referred to my notes as I listened. I found a lot of things I wanted to change and improve.”

He says he’s impressed by the level of preparation of the show’s three casts. “The students know what they’re singing and what they were singing about,” Fabris explains.

It was Chellis, who joined the College of Music faculty in 2014, who recommended Fabris while Eklund Opera Program Director Leigh Holman is on family leave. “We’ve always worked really well together, and he’s at the top of my list of people who are organized and can work quickly,” Chellis says.

“I love working with Matt,” concurs Fabris. “We’ve known each other a long time.”

In addition to working with an old friend, Chellis will spend Saturday night’s performance doing something he’s rarely had the opportunity to do as an educator: perform with his students. “It’s fun and interesting to put into practice what we discuss in the studio,” the tenor explains. “We’re sharing our experiences and learning from each other.”

The material is as familiar as it gets for Chellis: he’s performed “Don Ramiro” with companies all over the world, including Frankfurt Opera, Atlanta Opera and the National Symphony Orchestra at Kennedy Center. “It’s fun to be the romantic lead,” he says. “I like this role because it’s a challenge. There are a lot of vocal fireworks that one is required to negotiate.

Also familiar with Rossini’s comic opera is College of Music graduate Ashraf Sewailam. “This role has become my niche,” says the bass-baritone, a native of Cairo, Egypt. “I first played ‘Alidoro’ in 2007 with Nevada Opera and the Fresno Grand Opera, and I’ve done it with larger companies since then. I’m performing it again with San Diego Opera next year.

“It has one of the most amazing arias—the ‘transformation’ aria is my favorite that I’ve done.”

Sewailam is in Colorado to appear in “Aida” with Opera Colorado. He’s performing in “La Cenerentola” thanks to an agreement between Opera Colorado and the College of Music. “Originally, CU called me to ask whom I would recommend for the part since I was busy—but because of the generosity of Opera Colorado, we were able to work out a deal,” he explains.

He says he’s thrilled to be back in Boulder. “I like to say my wardrobe lives here, because I have a home in Boulder, but I’m on the road 10 months out of the year,” Sewailam says.

And he knows for the students he’s performing with, it’s thrilling to have him back, too. “I was in awe as a student when I got to work with our accomplished faculty and alumni,” he says. “You learn so much, not just about the skill you need, but how to behave as a professional.”

For the audience, the chance to hear and see the work of these renowned professionals is icing on the cake. “‘Cinderella’ is such a wonderful, universally known story,” says Chellis. “It’s beautifully written, funny, sincere and poignant.

“It’s appropriate for younger voices, and it’s also a great style for the opera orchestra to learn to play.”

Sung in Italian with English surtitles

A new member of the College of Music faculty shares his approach to preparing students to become universal musicians, and fostering an environment of diversity and inclusivity. “It's not about hyper-specialization, but about flexibility, creativity and keeping an open mind,” he says. END_OF_DOCUMENT_TOKEN_TO_BE_REPLACED
Return to the top of the page