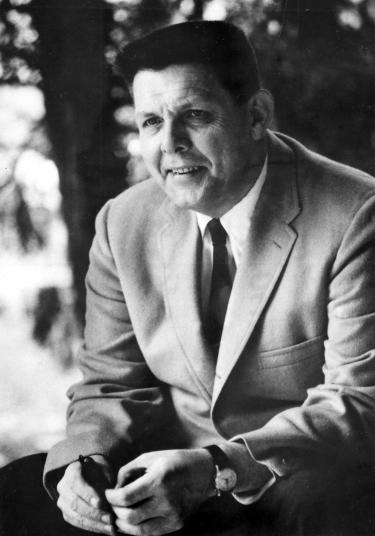 Educators leave behind a rich and varied legacy, shaping the careers of hundreds of students. The legacy of George Lynn—teacher, conductor, organist and composer—reaches even further.

This fall, the College of Music celebrates the legacy of the former CU Boulder teacher. The George Lynn Centennial Celebration is part of a year-long, nationwide celebration of what would have been his 100th birthday.

Lynn’s career in music began when he was just a boy. His parents, Swedish immigrants, settled near Wilkes-Barre, Pennsylvania, where Lynn was born—the youngest of eight children.

At age 12, Lynn started playing organ at the Swedish Lutheran Church in his hometown, where he also studied piano and organ at the local seminary. In the 1930s, he went on to Westminster Choir College, New Jersey, to study with the late John Finley Williamson, heralded by The New York Times as “dean of American choral directors.”

After composing and conducting at churches for several years, Lynn continued to make music while serving in the Army during World War II. When he returned, he continued his education and eventually joined the voice and conducting faculty at Westminster Choir College before heading west to Colorado.

A career in Boulder

Lynn came to CU Boulder in 1950 to teach humanities and conduct the University and Modern choirs. “In Boulder, he met some of his dearest friends and colleagues,” says his daughter, Christina Lynn-Craig (DMA '94 and former voice faculty). “He became friends with the CU Boulder composition faculty, worked with classics professor Donald Sutherland and collaborated with local writer Aileen Fisher.”

He also befriended Eph Ehly (DMA '69), a young conductor who referred to Lynn as “Uncle George.” In the early 60s, Ehly would travel to Lynn’s home in Golden for conducting lessons every other weekend.

“He taught me to see the extra in the ordinary,” says Ehly, Professor Emeritus, Conservatory of Music and Dance, University of Missouri-Kansas City. “To get ordinary people to accomplish extraordinary things.

“Of all the people who impacted my life and career, George Lynn is at the very top of the list. I fondly remember sitting with him one-on-one, being nourished by his brilliant thoughts.

“He made me feel like I could accomplish anything. He alone was responsible for the fact that I didn’t give up on teaching and conducting.”

Director of Choral Studies Gregory Gentry studied with both Ehly and Lynn. “My father and brother studied voice with Dr. Lynn. As a high school musician, I thought it was a family tradition to study voice with him, as well,” says Gentry.

“His passion for teaching and for making great music had a profound impact on me. I changed direction from studying instrumental music to choral music primarily because of my conversations with George Lynn.”

Also in Colorado, Lynn met his wife of nearly 40 years, Lucile. While they both worked at the College of Music simultaneously (Lucile was a member of the voice faculty), the couple met in 1950 in Colorado Springs. Their daughters, Christina and Lorna, were born in Denver in the late 1950s; the sisters’ half-brother, Eric, was born in 1945 in Princeton, New Jersey, to Lynn and his first wife, Betty.

A commitment to American music

After leaving Boulder in 1952, Lynn opened a private voice studio and founded the Lynn Singers choir in Denver. He also opened Golden Music, a music publishing company operated by the Lynn family for 28 years. The company’s earliest publications were works by CU-Boulder composition faculty.

In 1963, Lynn returned to Westminster Choir College as Music Director. Six years later, he made his way back to Colorado to devote more time to composition. During the next two decades, he continued to teach and compose in the region until his retirement in 1987. Lynn passed away in 1989, composing until the day he died.

Making Lynn’s music available for future generations is important to his family. “Most people know my dad as a choral composer and conductor,” says Lynn-Craig. “I think they’ll be surprised to hear his other kinds of music.”

For a man who wasn’t keen on birthdays, Lynn pulled out all the stops when he turned 65. “He wanted 65 churches or choirs to perform one of his pieces,” says Lynn-Craig.

That’s why his family wants to celebrate his 100th birthday in grand style, too. “We’re asking 100 choirs and ensembles around the country to perform his works,” explains Lynn-Craig. Westminster Choir College kicked off the celebration in May when the class of 1965 celebrated its 50th reunion.

Lynn-Craig says her father would have been delighted to see his music bring so many people together. “He would probably have written a new composition for the occasion.”

It was a busy fall for the American Music Research Center (AMRC)! One of the... END_OF_DOCUMENT_TOKEN_TO_BE_REPLACED

Friends, My heart is heavy. Associate Professor of Violin Charles (Chas) Wetherbee passed away on... END_OF_DOCUMENT_TOKEN_TO_BE_REPLACED

Longtime Associate Professor of Saxophone Tom Myer retired in May. As the year draws to a close, enjoy his insightful career reflections and advice … and discover what he’s up to now! END_OF_DOCUMENT_TOKEN_TO_BE_REPLACED
Return to the top of the page