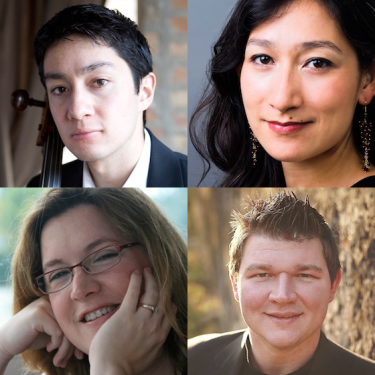 Harumi Rhodes has served as assistant professor of violin and string area coordinator at Syracuse University as well as assistant violin faculty at The Juilliard School.

Artist Member of the Boston Chamber Music Society and founding member of the Naumburg Award-winning ensemble Trio Cavatina, Rhodes is one of the most sought after performers of her generation.

She’s a frequent guest artist with Music From Copland House and has recorded Milton Babbitt’s Sixth String Quartet on John Zorn’s Tzadik label. Rhodes has also collaborated with several composers and toured with Musicians from Marlboro.

David Requiro, who joins the college from the University of Puget Sound, has been playing cello since age 6. He is currently the Cordelia Wikarski-Miedel Artist in Residence in cello and chamber music at Puget Sound.

The Oakland native earned accolades at the Naumburg International Violoncello Competition and the Washington International and Irving M. Klein International String Competitions. He’s performed with the Tokyo Philharmonic, the National Symphony Orchestra and several other orchestras in venues like Carnegie Hall and the Kennedy Center and collaborated with composers Krzysztof Penderecki and Bright Sheng.

Both Requiro and Rhodes have toured with the East Coast Chamber Orchestra (ECCO), a conductor-less chamber orchestra made up of world-class chamber musicians and soloists. They join the string department as associate professors.

Juilliard-trained classical pianist Jennifer Hayghe comes to Colorado from the School of Music at Ithaca College in New York. She’s performed all over the world, including with the National Symphony Orchestra and Syracuse Symphony Orchestra.

Hayghe also specializes in chamber music, performing in several major series including the Museum of Modern Art’s “Summergarden” and Bargemusic in New York. She has also been featured frequently in live performances on National Public Radio and other classical music radio programs.

In addition to being a member of the faculty at Ithaca, Hayghe recently conducted master classes at the Manhattan School of Music and the New York University Piano Master Class Series. She takes the role of associate professor of piano this fall.

Finally, Jeremy Reger will join the voice department as vocal coach at the senior instructor level. Reger is currently director of keyboard studies and collaborative arts at Christopher Newport University in Virginia.

Teaching and mentorship are Reger’s true passions, and he’s worked with some of the top vocal performers and coaches in the country, including at the Minnesota Opera and Indiana Opera Theater. In summer 2014 he was a coach and performer at the Opera Studio de Recife in Brazil.

Reger’s performance background includes stints with the Virginia Symphony, the Williamsburg Symphonia and the Cantabile Singers Art Song Project. He holds degrees from Cincinnati Conservatory of Music and the University of Michigan.

Curiosity drives Lydia Wagenknecht, a PhD candidate in ethnomusicology and recent recipient of a Fulbright Research Award. “I care that my research will help us understand something in a more broad-based way that we didn’t understand before,” she says. END_OF_DOCUMENT_TOKEN_TO_BE_REPLACED

We’re so excited to welcome alumnus Damani Phillips back to campus this week and to present him the College of Music’s 2022 Distinguished Alumnus Award at our commencement ceremony on May 5! “The versatile training provided by CU has been the cornerstone of my success to date, and has enabled me to do and be many things well beyond typical expectations,” he says. Meet Phillips and discover his powerful advice to graduating Music Buffs. END_OF_DOCUMENT_TOKEN_TO_BE_REPLACED

On May 5, we look forward to welcoming back Judith Glyde, formerly professor of cello and chamber music at the College of Music and chair of our string faculty. Since retiring in 2014 to live in New York City, the professor emerita she has been active with the college’s alumni community there, offering tremendous support to Forever Buffs who are now living and working in the city. END_OF_DOCUMENT_TOKEN_TO_BE_REPLACED
Return to the top of the page