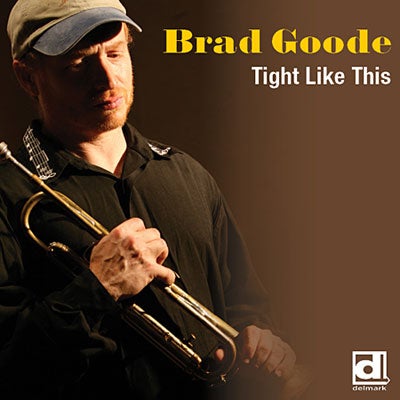 Associate Professor of Jazz Studies Brad Goode debuts his exciting new quartet on Tight Like This, Goode’s fourth Delmark Records CD and his twelfth as a leader. The Chicago native has assembled the band “I’ve longed for my entire career,” one that shares his willingness to take risks “while maintaining respect for the form and the group sound.” Tight Like This will be released September 21.

On the new CD, Goode tips his hat to trumpeters past with reinventions of vintage material such as the title track, recorded by Louis Armstrong’s Hot 5; “Changes,” a showcase for Bix Beiderbecke with the Paul Whiteman Orchestra; and “Reverse the Charges,” composed by one of Goode’s trumpet heroes, Freddie Webster. The five Goode originals include “Summary,” a tribute in 3/4 time to saxophonist Eddie Harris, Goode’s late friend and mentor; and “Bob’s Bounce,” a hard-bopping salute to Delmark Records founder Bob Koester, who issued Goode’s very first album in 1988.

“I’ve spent hundreds of hours just listening to him talk,” the trumpeter says of Koester. “For me, a jazz history professor, it’s been great knowing Bob and hearing all of his insight and all of his stories about his own experiences.”

Goode plans to take the new quartet on tour during his 2011 sabbatical from the University of Colorado; in the more immediate future, he’s scheduled to appear with them at the Chicago Jazz Festival 9/5 and the Hyde Park Jazz Festival 9/25.

Brad Goode, 46, was born and raised in Chicago, where he started on cornet at 10 and switched to trumpet at 13. He earned a bachelor’s degree in trumpet from the University of Kentucky and a master’s in bass from DePaul University. From 1986 to 1997, Goode led his own group in Chicago with a cast including saxophonists Lin Halliday and Ron Blake, pianists Jodie Christian and Ron Perrillo, guitarist Fareed Haque, trombonist Paul McKee, and drummer Dana Hall. The group often was augmented by Von Freeman and Ira Sullivan, and appeared each Wednesday at the Green Mill for 11 years.

Goode’s recording debut came in 1988, with Shock of the New for Delmark. He recorded an eponymous album for Sunlight in 1995; two for SteepleChase (Toy Trumpet in 2000, By Myself in 2001); Hypnotic Suggestion (2006) and Nature Boy (2007) for Delmark; and, most recently, Polytonal Dance Party (Origin, 2008). The trumpeter also led four SteepleChase Inside Chicago dates with Von Freeman in the early 2000s, and was a featured member of Curtis Fuller’s quintet on the 2004 Delmark album Up Jumped Spring.

“Since I left Chicago in 1997,” says Goode, “I’ve focused my energy on being an effective and dedicated teacher. My performing has mostly consisted of sideman and freelance work, more often as a lead trumpeter rather than as a soloist. With this great quartet, I hope to return to performing creative jazz on a more regular basis. I feel ready, and I hope people will enjoy this new recording.”

As we celebrate National Hispanic Heritage Month, we're inspired by the resilience and determination of DMA student Pablo Beltran. END_OF_DOCUMENT_TOKEN_TO_BE_REPLACED

We’re thrilled to introduce Raven Dow-Hygelund and Anna Kallinikos as the most recent recipients of the College of Music’s Sher Distinguished Musician Scholarship. END_OF_DOCUMENT_TOKEN_TO_BE_REPLACED
Return to the top of the page