In 2008, researchers exploring two caves in the Swabian Jura mountains of Germany uncovered a handful of small, bone flutes. The finds were at least 35,000 years old, making them the oldest known instruments carved by Homo sapiens. The most complete measured just 8 inches long and had been fashioned from the wing bone of a griffon vulture.

Humans, these and other discoveries seem to suggest, have been making music for longer than we’ve lived in cities or grown crops.

She believes that music, from religious hymns to Taylor Swift anthems, may touch something deep in the human brain—a hardwired need, perhaps, to sit around a fire or in a concert arena and feel connected to the people around us.

“Music is found in disparate cultures all around the world. It’s an innately human ability,” she said. “And in most of those cultures, it’s used to draw people together.”

Leslie joined CU Boulder this fall as an assistant professor in the College of Music and the ATLAS Insitute where she leads the Brain Music Lab, one of the institute's portfolio of unorthodox research groups. Her work melds art, engineering and neuroscience to probe the millennia-spanning relationship between humans and a good tune, and whether the right kind of music can help to heal the body and brain.

She’s also a performer who taps into her own body to create music. In her flute concerts, Leslie often comes onstage wearing a medical device called an electroencephalogram (EEG) cap. The high-tech headgear transforms the rhythm of her brainwaves into hypnotic sounds that become part of her performance—the mind of the musician laid bare for an audience.

“How can we use that ability of music to create closeness to develop new technologies that can improve the connection between people?” Leslie asked. “That’s the challenge facing researchers.”

It was that same sense of connection that first drew Leslie to music.

She was born into a musical family—her grandmother was a piano teacher, and she learned to play when she was 4 years old. In fifth grade, she picked up the flute. There was something different, she felt, about playing music in a band.

“The flute really stuck with me because of the social element of it,” Leslie said. “As a shy person who wasn’t athletic, it was a way for me to feel like I was part of a group.” 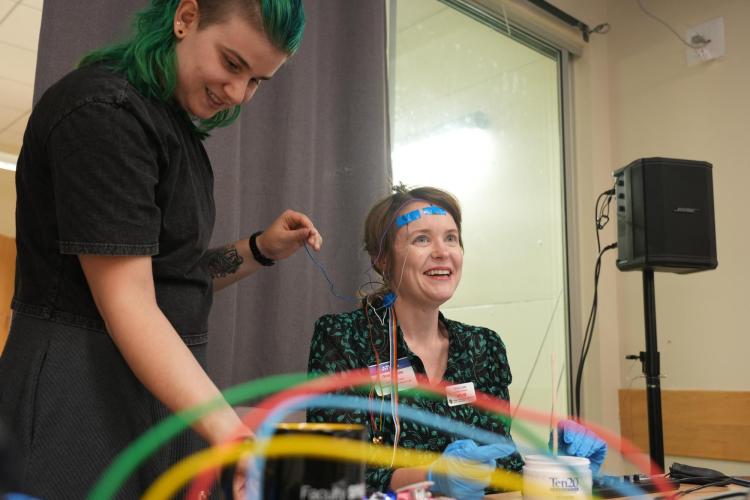 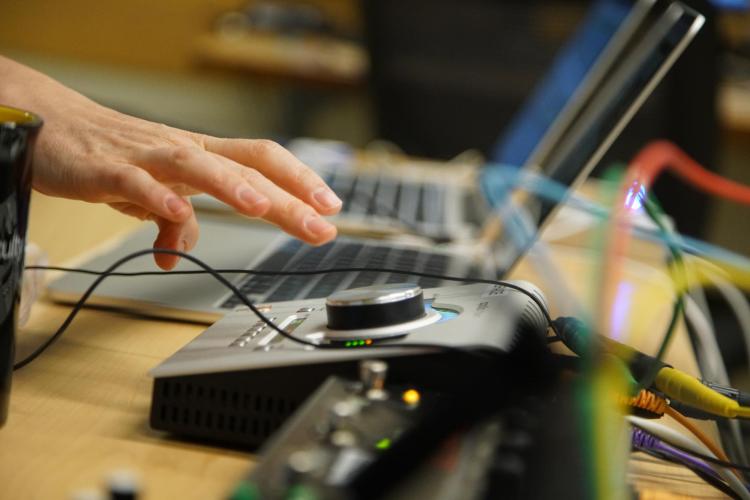 She isn’t alone in that feeling. In a 2021 study, Leslie and her colleagues played music inspired by human heartbeats to participants looking at a series of images of people with different facial expressions: angry faces, sad faces and more. Just hearing those sounds changed how the subjects viewed the emotions on display in the photos—a sign that music may, somehow, be inherently tied to human empathy.

Some scientists theorize that our mothers may be largely responsible for this link. As the first person many humans interact with in a meaningful way, mothers communicate with their infants through what researchers call “motherese”—a language built on lullabies, coos and even the pum-pum of the human heart.

“It’s a musical language that mothers sing to their babies, which is a way of communicating affect to a child that hasn't learned spoken language yet,” Leslie said. “That mother-infant bond is important to the survival of the human race.”

In a new project funded through the U.S. National Science Foundation, she’s setting out to discover just how powerful that sort of music can be. She’ll travel to neonatal care units, where mothers often can’t communicate with their infants. Leslie will examine whether piping in heartbeat-like music to infants and their mothers can help them experience less stress and maybe even leave the hospital sooner.

“Is there something inherently healing for women going through that experience to be able to form that connection to their children through music?” she asked.

As a first step, Leslie plans to run similar experiments on healthy mothers and babies in her lab on the CU Boulder campus this spring. Her work is part of the College of Music’s new, interdisciplinary focus on developing  “universal musicians”—or multiskilled, multifaceted artists who use music to engage with society.

In 2015, Leslie launched a concert series called Vessels drawing on the work of early pioneers in electronic music such as Pauline Oliveros, Alvin Lucier and Brian Eno.

In these performances, she turns to EEG technology to, almost literally, open up her brain for her listeners. EEG sensors, which doctors use to diagnose epilepsy and brain damage, measure the miniscule blips of electricity that thrum inside the brain all the time. One type of pattern called delta waves, for example, rises to the surface when humans fall fast asleep. When someone is awake and active, beta waves become more common.

Leslie wears a cap onstage at her concerts, which records all of those waves, then feeds them into a computer program that converts the signals into spare, sometimes-haunting sounds. At the same time, she plays her flute live, blowing into the instrument with slow and controlled breaths.

One audience member compared the sonic experience to resting in a warm bath. For the musician, it’s the ultimate exercise in vulnerability.

Leslie noted that she sees a parallel between her performances as a musician and her research as a scientist—on the stage and off, she hopes to tap into music to break down the barriers that exist between people.

“It’s very different as a performer to go on stage and have your actual state revealed to an audience,” she said. “If I get nervous and my heart starts to beat, the whole idea is for the audience to be able to hear that.”

Seventy-eight years ago on Jan. 27, the Auschwitz concentration camp closed after liberation by the Soviet army. Professor Janet Jacobs, who researches genocide, trauma and collective memory, discusses the ways in which the experiences and trauma of Holocaust survivors are passed down through generations. END_OF_DOCUMENT_TOKEN_TO_BE_REPLACED

A model of your very own kidney made entirely from soft and pliable polymers? Researchers at two CU campuses are on the cusp of 3D printing realistic replicas of human anatomy. END_OF_DOCUMENT_TOKEN_TO_BE_REPLACED

Legalizing recreational cannabis does not increase substance use disorders or use of other illicit drugs in adults and may reduce alcohol-related problems, according to new research. The study also found no link between cannabis legalization and increases in cognitive, psychological, social, relationship or financial problems. END_OF_DOCUMENT_TOKEN_TO_BE_REPLACED
Return to the top of the page