When Clint Carroll moved into his home in Longmont in 2015, the backyard was waist-high with weeds. Today, he tends to tall stalks of white heirloom corn, as well as raised beds seeded with beans, squash, potatoes, tomatoes, traditional tobacco and more, depending on the season.

Not all of these crops are native to Colorado, from Cherokee lands or even from the lands we know as North America—but they all serve the same broader purpose: to cultivate and preserve Indigenous culture at a time when climate change, encroaching development and lingering colonial-era stereotypes threaten it.

Carroll is associate professor in the Department of Ethnic Studies, where he teaches Native American and Indigenous Studies, focused on environmental issues such as access to gathering wild plants, land use management and governance. He’s also a citizen of the Cherokee Nation and sits on the board of the Center for Native American and Indigenous Studies (CNAIS) at CU Boulder, as well as on the board of the Denver Botanic Gardens.

“The more people can see themselves in relation to the land, these plants and their food, the better off we will all be,” said Carroll. “The act of growing your own food is a way of sealing that connection to the land and having some sense of connection with what we eat and where it comes from.”

Corn in particular is a hallowed plant for the Cherokee people. Some refer to it as “Selutsi,” or “mother corn,” demonstrating both its subsistence and spiritual importance. This staple for Cherokee, as well as many Indigenous peoples in the Americas, at first faltered in Carroll’s backyard in the face of Colorado’s high winds and persistent squirrels, but it has since taken root under he and his family’s attentive care.

Inspired by his own father to care for the land, Carroll and his wife Angelica Lawson, who is Northern Arapaho and assistant professor of Ethnic and Cinema Studies at CU Boulder, now hope to seed this same interest in the next generation, including their own child.

“The act of tending the corn, tending the garden is a way of instilling those lessons of being connected to the earth and being aware of your surroundings, being aware of the weather patterns, and how to make sure that those plants survive,” said Carroll.

Many other families across the U.S. will soon gather to share in a tradition centered around food. Thanksgiving, however, comes with a complicated history—and the version many are taught as children is incomplete.

“It's obviously a part of the way that most Americans think about the founding of this country,” said Carroll. “A lot of Native people recognize it as a day of mourning or a day of sorrow because of the genocide that happened in this country against Native people.”

Yet Carroll sees Thanksgiving as a teaching moment, in terms of this country’s history and food appreciation—both of which can extend beyond just one day of the year.

“How do we take those lessons and have critical discussions with family, or as a nation, around Thanksgiving that push us to understand better what it means to be in relationship to the land and to the Native peoples, who are still here?” said Carroll. “We can have conversations that get us all to rethink some of what we were taught back when we were kids.”

Whether that’s taking time to learn the history of Thanksgiving from Native American perspectives, learning about whose lands you are on, or “decolonizing” your dinner table by taking a deeper look at the ingredients involved, there are a variety of ways to learn about the impacts of colonialism on Native American history, culture and food.

For Carroll, next week won’t be much different than normal for his family: gathering to eat and give thanks for the food they grow in their own backyard, while honoring family, community and tradition. 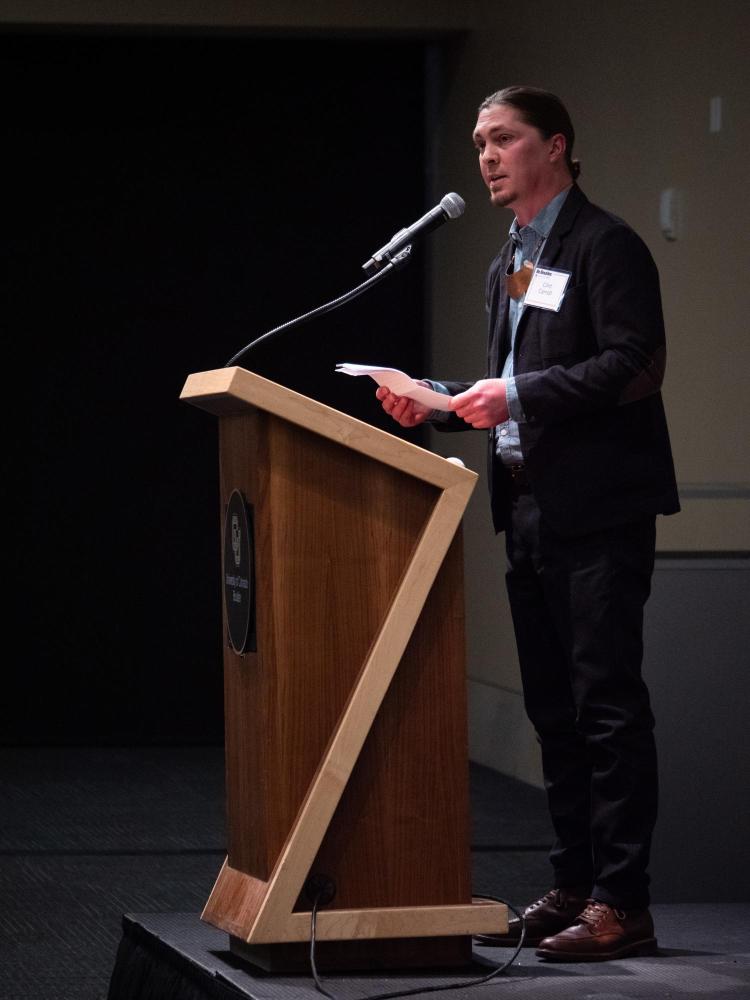 The challenge of climate change

Cherokee people were forcefully displaced from their homelands in the southeastern United States by the U.S. government from 1838 through 1839. Growing their traditional plants and foods in the territory we now know as Oklahoma was not easy, as the soil and rainfall differs greatly from that of the land named by the U.S. as Alabama, Georgia, Tennessee, and North Carolina.

When Oklahoma later became a U.S. state in 1907, the U.S. government virtually dissolved the Cherokee Nation government, said Carroll. Tribal land dropped drastically from 4.48 million acres to only 100,000 acres by 1971, again threatening their ability to grow food and gather medicines and cultural materials.

In conjunction with youth, elders and governance of the Cherokee Nation, Carroll studies how Indigenous communities can retain the ability to gather and use wild plant species, including that on land claimed by the National Park Service.

“Climate change impacts even further that ability to continue on these types of land-based traditions,” said Carroll. “It can be seen as yet another removal, but we're staying put this time.”

Initiatives like the Ărramăt project launched earlier this year—funded by the Canadian government and for which Carroll is a co-applicant—aim to address some of the grand challenges posed by climate change to Indigenous people and their lands.

Carroll has been able to connect this multimillion dollar, multi-year project with work he’s been leading over the past five years to train youth in his community in Oklahoma on important issues and challenges related to food, natural resource management and land use decisions.

“The beauty of this project is it's providing funding for these local place-based initiatives. It's also connecting Indigenous peoples around the world, enabling us to learn from each other and guiding our efforts within the Cherokee Nation to ensure that future generations can continue these plant-based traditions.”

Through the Niwot Ridge Long Term Ecological Research Project, housed at CU Boulder's Mountain Research Station, scientists will continue to examine the impacts of a warming world on the university's highest campus. END_OF_DOCUMENT_TOKEN_TO_BE_REPLACED

Birds that can live at 14,000 feet and also breed at sea level might have evolved more quickly than previously thought. END_OF_DOCUMENT_TOKEN_TO_BE_REPLACED

Despite the Inflation Reduction Act, U.S. progress on climate change remains stuck in a climate conundrum, CU Boulder experts say, hampered by politics, complexity and the scope of the problem. END_OF_DOCUMENT_TOKEN_TO_BE_REPLACED
Return to the top of the page