Pigment or optical illusion? What makes this berry blue

Pigment or optical illusion? What makes this berry blue

On a beautiful fall day in 2019, Miranda Sinnott-Armstrong was walking down Pearl Street in Boulder, Colorado, when something caught her eye: a small, particularly shiny blue fruit, on a shrub known as Lantana strigocamara. While its tiny clusters of pink, yellow and orange flowers and blue berries commonly adorn the pedestrian mall in spring, city workers were ripping these common Lantanas out to prepare for the winter season.

Sinnott-Armstrong, postdoctoral researcher of ecology and evolutionary biology at CU Boulder, quickly asked if she could take a specimen back to the lab. She wanted to know: What made these berries so blue?

Sinnott-Armstrong’s results are now published in the journal New Phytologist. The study confirms Lantana strigocamara as the second-ever documented case of a plant creating blue-colored fruits with layered fat molecules. She and her co-authors published the first-ever documented case, in Viburnum tinus, in 2020.

The two plants are among only six in the world known to make their fruits’ hues using a trick of the light known as structural color. But Sinnott-Armstrong has a hunch there are more.

“We’re literally finding these things in our backyards and on our streets, people just haven’t been looking for structurally colored plants,” said Miranda Sinnott-Armstrong, lead author on the new study. “And yet, just walking on Pearl Street, you’re like, ‘Oh, there’s one!’”

Structural color is very common in animals. It’s what gives peacocks’ otherwise brown feathers their brilliant greens, and many butterflies their bright blues. But this optical illusion of sorts is much rarer in plants, according to Sinnott-Armstrong.

To create its unique color, these blue fruits use microscopic structures in their skin to manipulate light and reflect the wavelengths our eyes perceive as blue, giving it a distinctive metallic finish. Pigmented color does the opposite, absorbing select visible wavelengths of light. This means structurally-colored berries have no color within themselves; if you were to squish them, they would not stain blue.

In fact, if you peel the skin off a Lantana fruit and hold it up to the light, it looks completely translucent. But if you place it against a dark background, it looks blue again, due to the nanostructures on the surface responsible for reflecting the color. 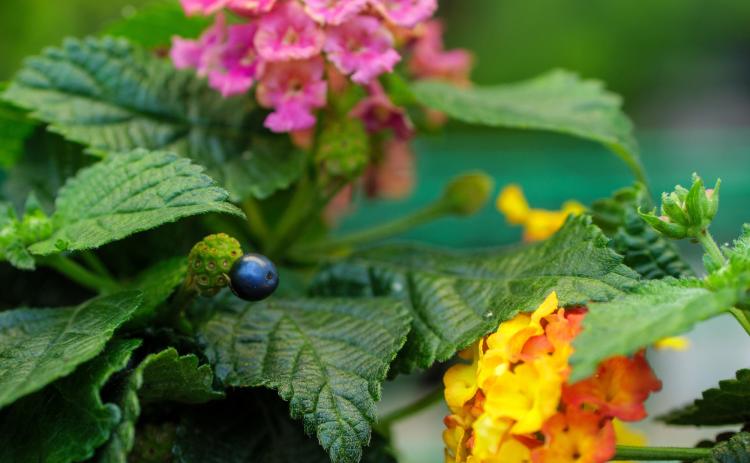 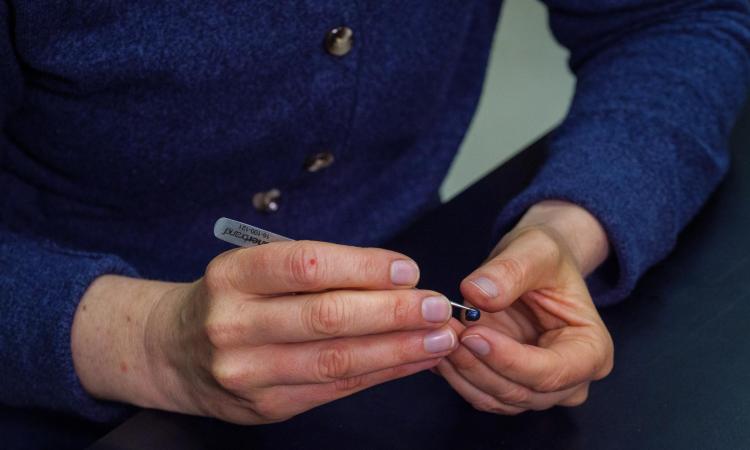 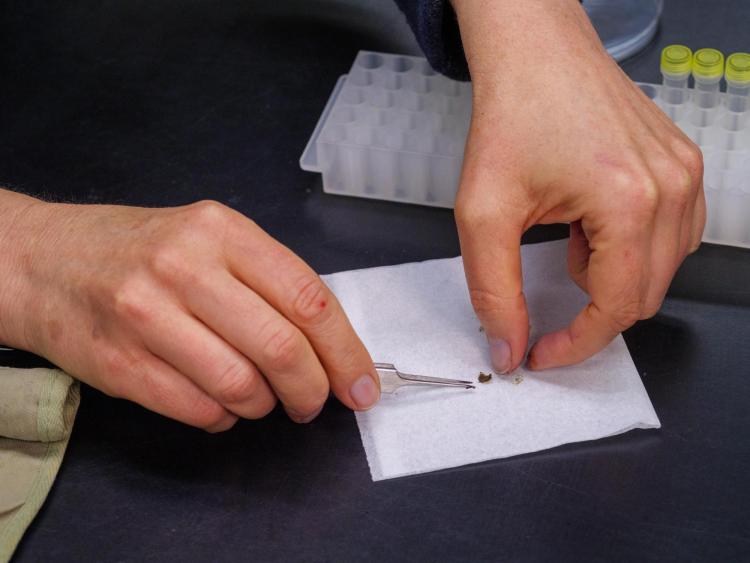 Top: Lantana strigocamara in the Ramaley Greenhouse. Bottom: Stacey Smith, co-author on the publication and associate professor of ecology and evolutionary biology, peels the skin off of a Lantana fruit. (Patrick Campbell / CU Boulder)

The evolution of color

What’s especially unique about Lantana strigocamara—besides the fact that the color blue is quite scarce in nature, especially in fruits—is that it creates this structural color in its skin using layers of lipid molecules, or fats.

Viburnum tinus is the only other plant known to do the same thing, and Lantana and Viburnum last shared a common ancestor more than 100 million years ago. Meaning, the two plants evolved this shared trait completely independent of one another.

“It puts us on the hunt for other groups where this happens, because we know it can be done multiple ways,” said Stacey Smith, co-author on the publication and associate professor of ecology and evolutionary biology.

The researchers also chat often about why such a thing would evolve. Does structural color provide an evolutionary advantage?

Some theorize that structural color could help with seed dispersal. While there are very few known structurally colored plants, they are globally widespread. Lantana itself is invasive in many parts of the world, especially in tropical regions. It’s possible that the metallic, shiny nature of the fruit provides strong contrast with surrounding foliage, attracting animals to eat them and disperse their seeds, according to the researchers.

“But just being blue and sparkly might be enough for an animal to think it's decorative,” said Smith.

The researchers noted that many birds, especially in Australia, like to use structurally colored fruits to adorn their bowers and attract mates. Humans, interestingly, may also be contributing to the spread of Lantana for the same reason.

“The fact that they made their way into horticulture suggests that we are susceptible to the same things are that other animals find attractive about them,” said Smith. “We're like, oh, look at that sparkly, cute thing. I should put that in my garden.”

Another possibility is that the thick, fatty layer which creates this unique color is a protective mechanism for the plant, providing defense against pathogens or improving the structural integrity of the fruit, said Sinnott-Armstrong.

The color blue itself could also be a clue.

Some researchers in Silvia Vignolini’s lab at the University of Cambridge—where Sinnott-Armstrong is currently based—are now trying to make colored paints, fabrics and more out of structural color, by better understanding the assembly of cellulose nanocrystals in colored fruits.

Researchers hope to learn more about the possible evolutionary prompts for this mechanism, as more structurally colored fruits are discovered.

“They're out there,” said Sinnott-Armstrong. “We just haven't seen them all yet.”

A collaborative study, including CU Boulder associate professor Andrew McAdam, investigates how the risks and rewards of red squirrel reproduction are a microcosm of evolutionary patterns. END_OF_DOCUMENT_TOKEN_TO_BE_REPLACED

What happens when an expert on natural language processing asks a chatbot to write a children's book in the style of Dr. Seuss? Professor Kai Larsen put the question to the test. END_OF_DOCUMENT_TOKEN_TO_BE_REPLACED

A model of your very own kidney made entirely from soft and pliable polymers? Researchers at two CU campuses are on the cusp of 3D printing realistic replicas of human anatomy. END_OF_DOCUMENT_TOKEN_TO_BE_REPLACED
Return to the top of the page