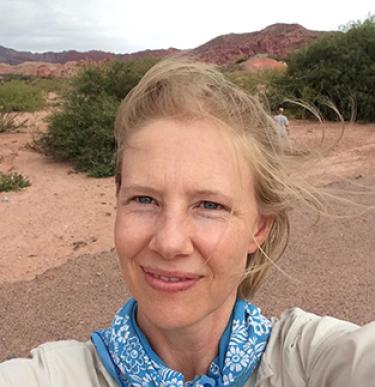 Stacey did undergraduate degrees in Biology and Spanish at Virginia Tech before moving to the United Kingdom to 'read' for an MPhil in Botanical Diversity with the support of a Marshall Scholarship. As a MPhil student, she worked on the pollination ecology and floral phenology of Solanum with Sandy Knapp and Barbara Pickersgill and also did a turn at Kew Gardens, working on population genetics of orchids with Michael Fay and Mark Chase. She returned to the states in 2001 to join David Baum's lab at the University of Wisconsin-Madison.  Having stumbled across Iochroma in an obscure publication in the Kew Library, she spent the next five years building this small but spectacular clade as a model system for studying floral trait evolution. Her postdoctoral work with Mark Rausher at Duke University examined the genetic basis for flower color transitions in Iochroma.  She was an Assistant Professor in Biological Sciences at UNL until 2013 when she moved to the EBIO department at CU Boulder. In addition to tending her living collection of Solanceae, Stacey likes to play badminton and spend time with the lab mascot, Abby.

Tweets by @iochromaland
Return to the top of the page