Nearly two years into the COVID-19 pandemic, the science is clear: The virus is airborne, and the best way to protect yourself and others (other than vaccination) is to keep the air you breathe fresh and filtered.

But how does that change our daily lives, at work or school? And what opportunities exist to rethink how we live to not only combat the virus but also address climate change, human health and other issues? The Program in Environmental Design at CU Boulder is tackling these questions through innovative projects that do everything from improve spaces for outdoor learning to rethinking streetscapes. 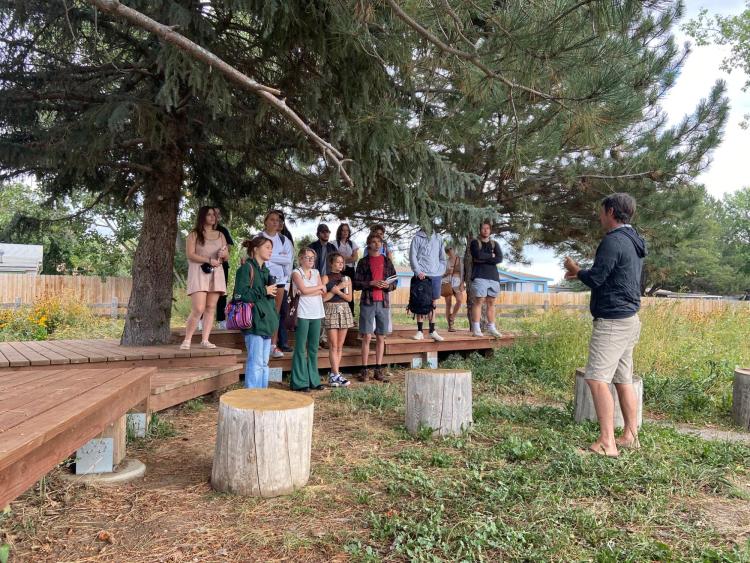 In 2019, instructor Emily Greenwood met with a parent who was interested in planting trees at their child’s school. Greenwood got to thinking: We could do a lot more than plant trees.

That day, a seed was planted. And come the following year––the fateful 2020––Greenwood kicked off a green school yard design studio. It was either the best or the worst time to work with schools, as the pandemic changed everything about education almost overnight.

“But there's never been a more pressing need for outdoor learning,” said Greenwood. “We think that when we leave the buildings, the learning stops. But why would it? Outside, so much learning can happen.”

In Greenwood’s studio, now in its second year, 20 undergraduate students work with various partners, including CU Boulder; the Boulder Valley School District; Thorne Nature Experience; and this year, two private schools in the area. In 2020, it involved four elementary schools in the Boulder Valley School District, but it has since expanded to include a middle school and a high school––adding exciting new learning design challenges.

The CU Boulder students in the program design a master plan, a kind of schematic conceptual rendering, detailing what could happen in the space in the next 10 years. Then, high priority areas within the plan are identified and designed in more detail, such as stormwater management systems, and social and play spaces.

How scarcity can breed creativity

Commonly called slums, informal settlements are on track to house 3 billion people––one third of the world’s population––by 2050, according to Samper. But we don’t actually know that much about these developments. Learning more about them could save residents’ lives and help us save the planet, said Samper.

“By living in such a scarcity of resources, these communities are forced to be highly creative,” said Samper.

Samper’s work focuses on mapping informal settlements around the world, making their inhabitants visible, highlighting their living conditions and the fact that these residential areas are growing exponentially. He also works directly with communities, and for the past 14 years, has conducted collaborative projects with residents of informal settlements in Colombia.

He realized impacts of the COVID-19 pandemic would likely be higher in these settlements, because most of their daily needs and services require in-person contact with other people, and most informal communities are already living in unsanitary conditions. What he found in his collaborative research––now published in the journal Environment and Urbanization––is that the capacity of informal settlement communities to adapt has allowed them to accommodate the pandemic’s challenges in unexpected ways.

“We saw local community organizations reacting really quickly to providing new services, creating COVID protocols to actually prevent diseases, and just to be able to attend to the conditions that were happening,” said Samper. “The bottom-up approach of these organizations allows them to react quicker than state organizations to the challenges posed by the pandemic.”

One community Samper works with in Colombia organized to access cleaning supplies and personal protective equipment, as well as created their own protocols for social distancing, temperature checks, and to sanitize equipment and materials, which allowed them to meet in person and continue building infrastructure.

Since 2016, Samper has traveled with CU Boulder students each year to Medellín, Colombia, for six weeks to collaborate with communities in informal settlements and work on important local infrastructure projects. This studio project receives funding from the CU Boulder Office for Outreach and Engagement and support from CU Abroad. Samper and his students collaborate with the Neighborhood Association Carpinelo 2, Corporacion Convivamos and Universidad San Buenaventura. 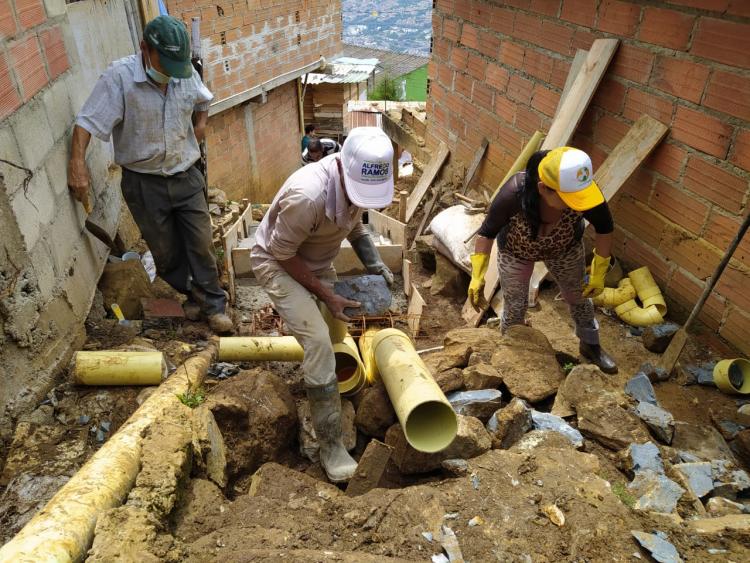 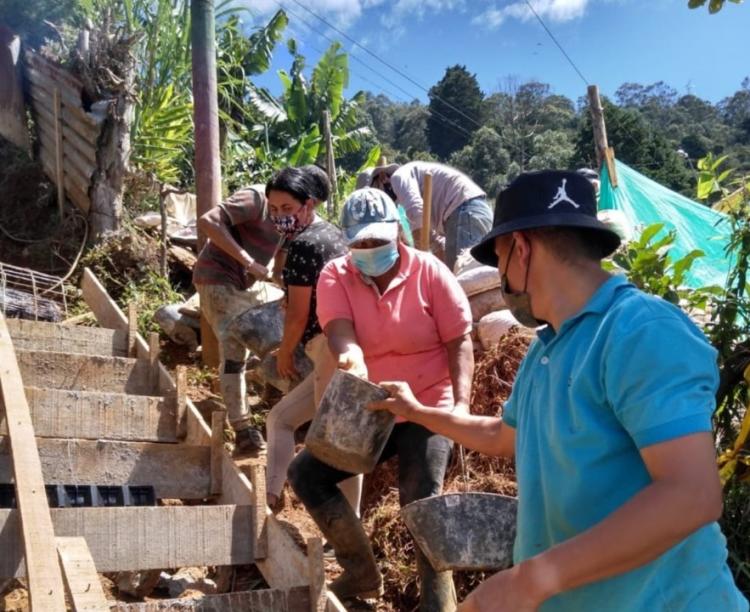 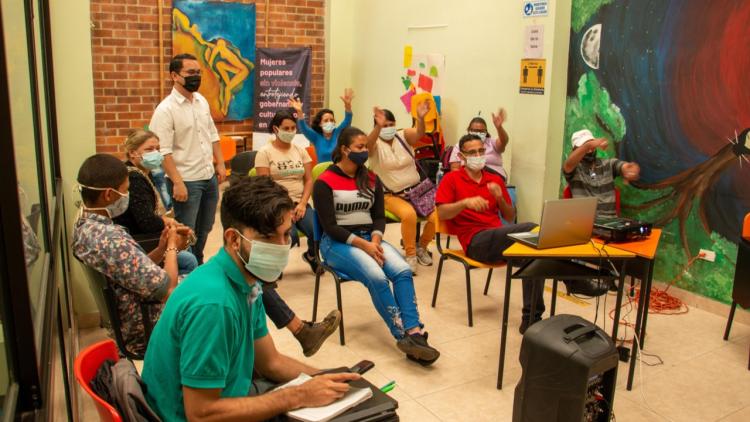 In 2020 and 2021, the project had to go virtual and do some creative problem solving itself. Because Samper and the students could not travel to Medellín, they connected on Zoom with community members––despite their limited access to computers and phones––to discuss and design solutions for problems the community needed addressed. As a result, a much-needed stairway is being constructed to increase accessibility in and out of a neighborhood on a steep slope, which will also stabilize the terrain, protect against dangerous and destructive landslides, and cover and strengthen exposed sewer pipes.

“They are used to dealing with crises every day,” said Samper. “The pandemic was just a new crisis. They were able to switch gears and modify the way they live to those conditions much better than most of us, and that's something we can learn from.”

The next generation of streets

In early 2020, as the COVID-19 pandemic prompted initial widespread lockdowns, streets in many cities suddenly became a lot less busy. One would think fewer cars on the road would have helped street safety, but even with reduced road travel during the pandemic, the high numbers of car crashes and pedestrian deaths prior to 2020 have continued, said Professor Kevin Krizek.

“This is space in cities where things are not getting better, they’re getting worse,” said Krizek.

Yet the pandemic has provided a unique window of opportunity: A moment to reimagine our streets. And a spring 2021 capstone course in the Program in Environmental Design led by Krizek did just that.

The undergraduate students, broken into five teams with different names, asked important questions such as: How can we make streets safer and more accessible? Who determines where and what changes happen to streets? And what makes a street “successful,” anyway?

They focused on regional, real-world examples in Denver and Boulder and learned directly from local experts in government and the transportation industry to develop evidence-based ideas for the next generation of streets––some of which may be implemented by the city of Denver.

For example: U.S. streets in the 21st century overwhelmingly prioritize vehicles, especially as they are measured by something called “Level of Service” (LOS), which focuses on how to make streets better for vehicles rather than measuring for any social or economic benefits the street provides.

“They say pedestrians have the right of way, but it really just doesn't ever feel like that,” said Avery Novotny, 2021 graduate and student lead for Team Success. “We wanted to know what a successful street looks like for users outside of the car. And how might that not be happening right now? And why? And how can we make that success happen?”

Novotny’s team took to heart a mantra used by one of the class’s several industry speakers: What gets measured gets done. So, her team’s work examined how streets can be measured in a different way that includes getting people out of their cars.

“But we can't get there tomorrow. So how do we get there slowly and incrementally?” said classmate Ethan Harrington, also a 2021 graduate.

Harrington led Team Limbo, which explored the very concept of streets in transition between sole use by cars to shared use by vehicles, pedestrians, bikes and scooters. The idea is that streets don’t need to drastically change to improve their success: temporary barricades can be used by communities to test out dedicating half or a whole street to modes of transit other than vehicles, he said.

It’s all about “flexibility based on community,” said Harrington.

While the pandemic provided students the perfect opportunity to ask tough questions about transportation, the window of opportunity is also fleeting. Not using this chance to reimagine our streets––which can affect climate change, racial inequality and accessibility––would be a wasted opportunity, said Novotny.

“The notion of environmental design is doing better with space,” said Krizek. “And what the students found is that streets are a space that is available to be played with, in terms of creating better communities.” 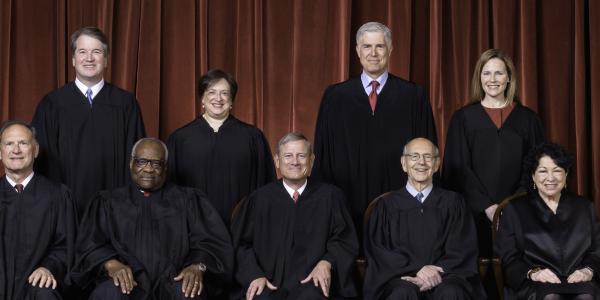 A recent survey shows more than 60% of Americans know “nothing at all” or only “a little bit” about what Juneteenth is or its importance in American history. Ashleigh Lawrence-Sanders, professor of African American and Black cultural history, discusses how and why we celebrate Juneteenth. END_OF_DOCUMENT_TOKEN_TO_BE_REPLACED

Life expectancy of Native Americans in the U.S. dropped by nearly five years during the COVID-19 pandemic, new research reveals. The study also found that while the rest of the developed world is rebounding in terms of life expectancy, the United States is not. END_OF_DOCUMENT_TOKEN_TO_BE_REPLACED
Return to the top of the page