The innovative program will spur research that supports the newest military branch’s mission as a service that “organizes, trains and equips space forces in order to protect U.S. and allied interests in space.” 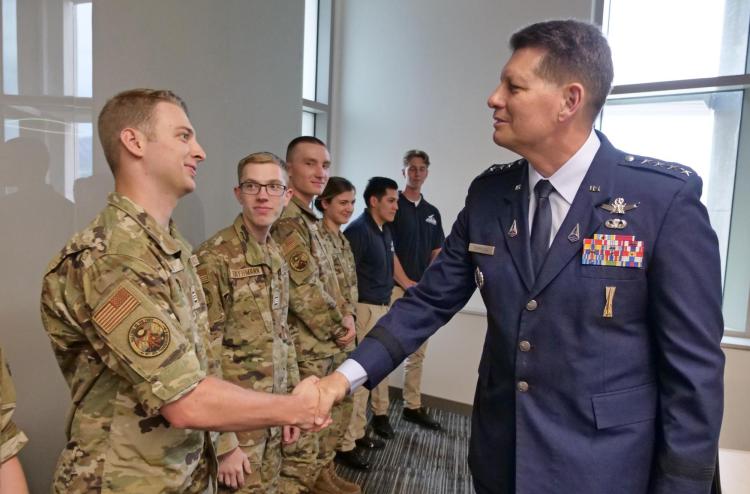 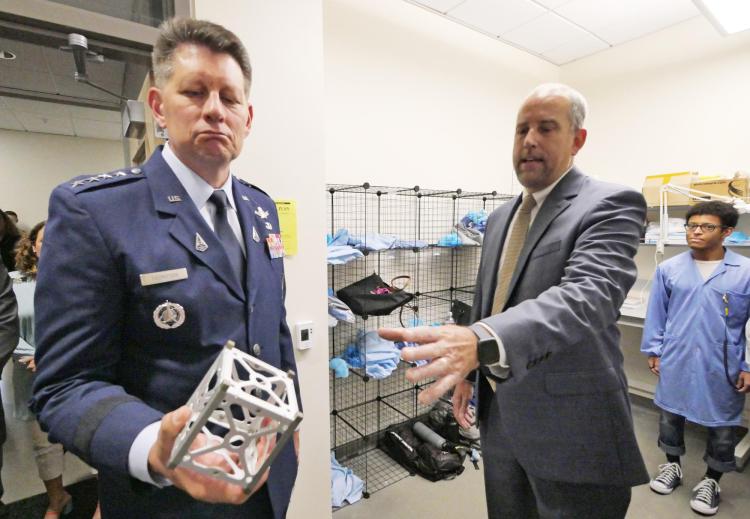 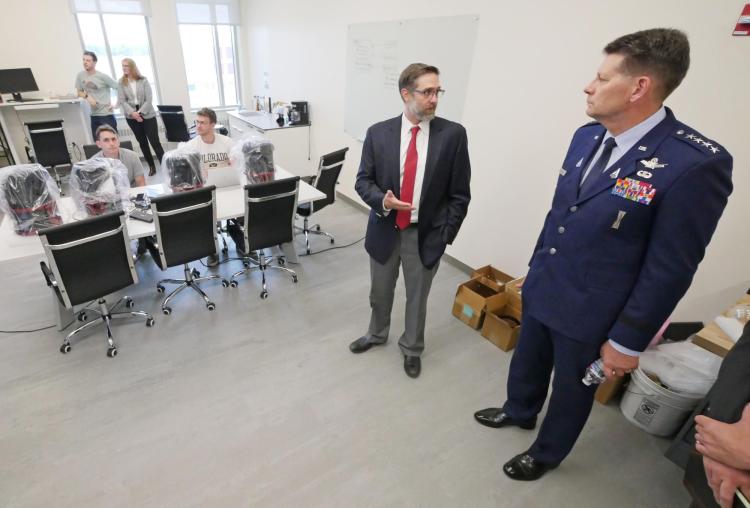 “As we envision where we have to go and what we have to be as we support the security and peaceful use of the domain and U.S. interests in space, we recognize that we need to up our game in terms of who and what we are as members of the U.S. Space Force,” said Gen. David Thompson, vice chief of space operations for the U.S. Space Force, to an audience of about 35 people.

Gen. Thompson doled out career advice to ROTC cadets and toured research labs pioneering the design of autonomous vehicles, satellite tracking technologies and more. He also spoke about the future of the newly-launched Space Force—all while being framed by a two-story mural of a star-filled night sky in the Aerospace Engineering Sciences Building.

“Space Force has established the University Partnership Program to ensure they have access to the skilled workforce and technology innovations that they need to fulfill their challenging missions,” said Iain Boyd, director of the NSI and professor in the Ann and H.J. Smead Department of Aerospace Engineering Sciences. “The CU System is uniquely well positioned to help them in meeting their goals based on our strong space capabilities.”

The U.S. Space Force launched in December 2019 and relies on servicemembers called Guardians who often have backgrounds in science, technology, engineering and math (STEM) fields.

CU Boulder has been training those kinds of tech-savvy young people with an eye for the stars for decades. Thompson, who graduated from the Air Force Academy near Colorado Springs in 1985, saw that for himself on Thursday as he checked out labs in the aerospace engineering building.

In one room, Scott Palo, professor of aerospace engineering sciences, handed the general a metal frame about the size of a home smart speaker device.

The term refers to a class of satellites that are much smaller, and less expensive, than traditional spacecraft. Students at CU Boulder have already helped to design, build and operateabout 10 of these pint-sized craft, which have monitored everything from sea ice on Earth to radiation coming from the sun—and many more are in the works.

“The goal is to build, design and operate a spacecraft within a student’s time at a university,” Palo said.

Ryan Collins is a rising senior studying aerospace engineering at CU Boulder and vice-wing commander for the university’s Air Force ROTC. He attended the event alongside several of his fellow cadets. Collins, who is training to be a pilot, said that he appreciated the chance to hear more about this new frontier in national security.

“The future is space. We’ve connected everything between the Army, Navy, Marines and Air Force … through satellites,” he said. “If we are going to fight a 21st Century fight, it has to happen on the space level.”

Reaching for the stars

And the University Partnership Program will generate new research at that level. The Space Force recently selected CU Boulder and the University of Colorado Colorado Springs to join the program, which will also include several historically black colleges and universities. Details of the partnership still need to be formalized.

Fiez noted that the effort is a recognition of CU Boulder’s more than 70 years of experience in pushing the boundaries of outer space. That includes through the work of research institutes like the Laboratory for Atmospheric and Space Physics (LASP), Cooperative Institute for Research in Environmental Sciences (CIRES) and JILA.

In 2016, the university also launched a space minor that is open to students from any major.

“Expanding and strengthening our robust relationships with federal and corporate partners really boosts the impact of our research and creates new pathways to success for our students,” Fiez said. “Working with Space Force through the University Partnership Program will provide new leading-edge opportunities across a range of space and technological domains–areas in which CU Boulder already excels.”

Thompson got the chance to show off his own space bona fides when he saw a new feature of CU Boulder’s aerospace building—a one-third scale mockup of a satellite that was donated to the university by Lockheed Martin and installed on the ceiling just the day before.

He was right. It also won’t be the last spacecraft that students and alumni from CU Boulder will have a hand in launching beyond Earth’s atmosphere in the years to come.

A new NASA report shows that the University of Colorado Boulder is the top university recipient of NASA astrophysics technology grants. END_OF_DOCUMENT_TOKEN_TO_BE_REPLACED

CU Boulder has been selected as a member of the United States Space Command Academic Engagement Enterprise, a new national program designed to expand collaboration and academic exchanges between universities and Space Command. END_OF_DOCUMENT_TOKEN_TO_BE_REPLACED

Since July 2022, a miniature satellite about the size of a shoebox has been orbiting Earth and monitoring how much solar energy reaches the atmosphere, one of the "most important" Earth science measurements. Now, scientists are finalizing their analysis of the first five months of the testing. END_OF_DOCUMENT_TOKEN_TO_BE_REPLACED
Return to the top of the page