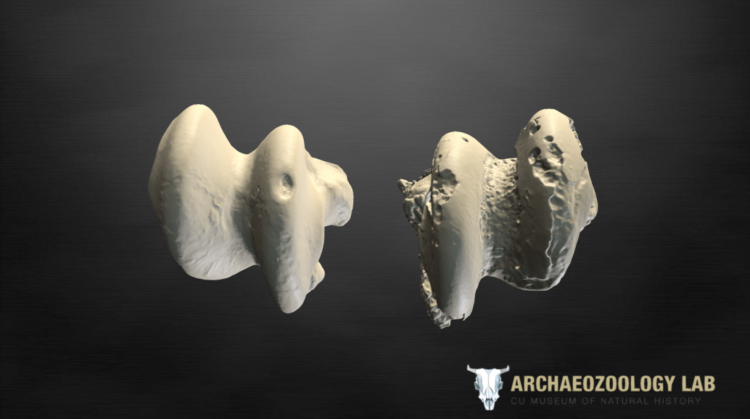 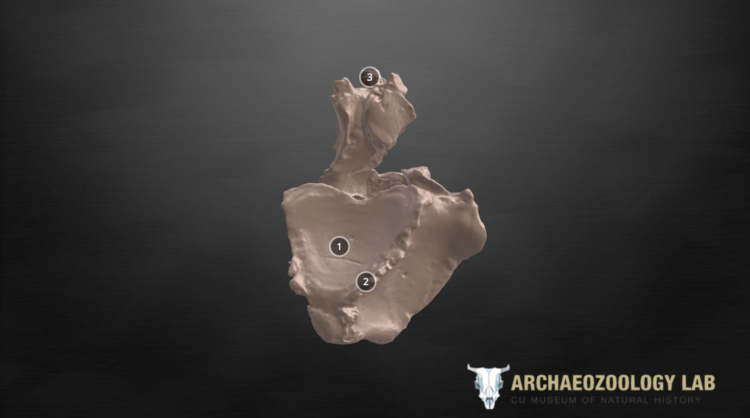 Banner image: The partially-excavated skeleton of the "Lehi horse," which was found in the backyard of a couple living near Provo, Utah. (Credit: Bridger Hill)

A new analysis of a horse previously believed to be from the Ice Age shows that the animal actually died just a few hundred years ago—and was raised, ridden and cared for by Native peoples. The study sheds light on the early relationships between horses and their guardians in the Americas.

The findings, published today in the journal American Antiquity, are the latest in the saga of the “Lehi horse.”

In 2018, a Utah couple was doing landscaping in their backyard near the city of Provo when they unearthed something surprising: an almost complete skeleton of a horse about the size of a smaller pony. Scientists and the media took note. Preliminary data suggested that the horse might be more than 10,000 years old.

“It was found in the ground in these geologic deposits from the Pleistocene—the last Ice Age,” said William Taylor, lead author of the new research and a curator of archaeology at the CU Museum of Natural History at the University of Colorado Boulder.

Based on a detailed study of the horse’s bones and DNA, however, Taylor and his colleagues concluded that it wasn’t an Ice Age animal at all. Instead, the animal was a domesticated horse that had likely belonged to Ute or Shoshone communities before Europeans had a permanent presence in the region.

But Taylor is far from disappointed. He said the animal reveals valuable information about how Indigenous groups in the West looked after their horses.

“This study demonstrates a very sophisticated relationship between Indigenous peoples and horses,” said Taylor, also an assistant professor in the Department of Anthropology. “It also tells us that there might be a lot more important clues to the human-horse story contained in the horse bones that are out there in libraries and museum collections.”

Taylor leads an effort funded by the U.S. National Science Foundation, called “Horses and Human Societies in the American West.” And he’s something akin to a forensic scientist—except he studies the remains of ancient animals, from horses to reindeer. Taylor recently helped to organize the digital exhibit "Horses in the North American West" from the CU museum. And he said that researchers can learn a lot by collecting the clues hidden in bones. 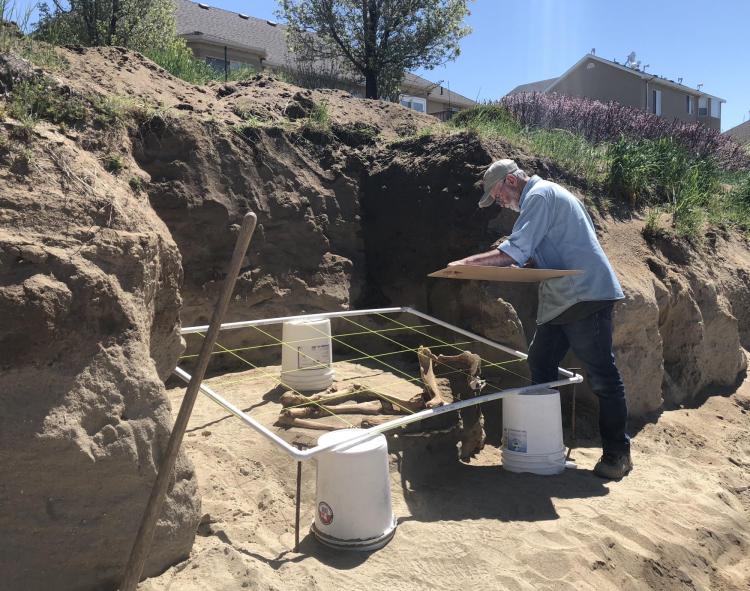 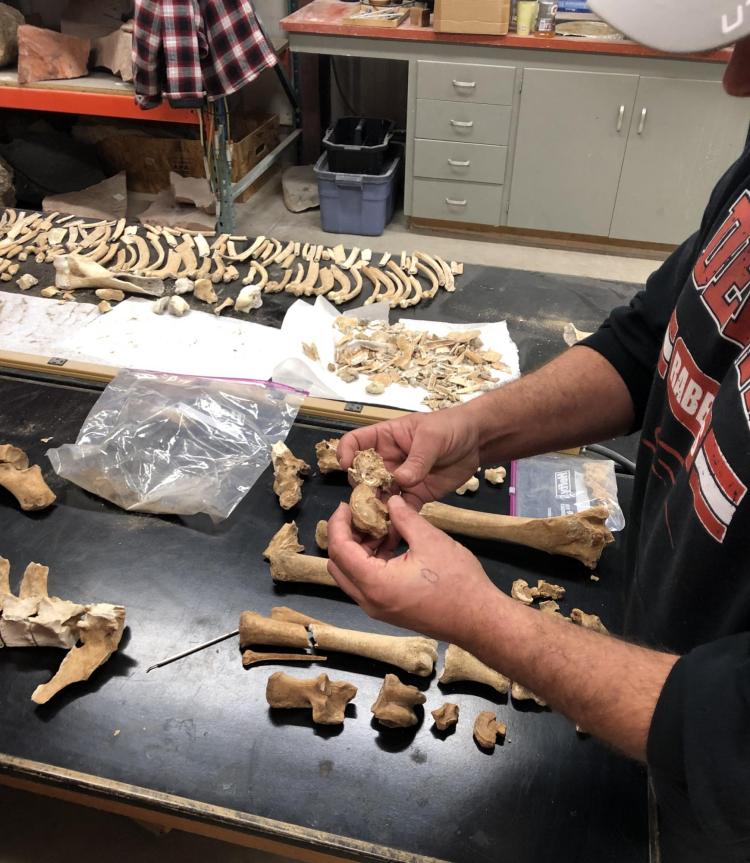 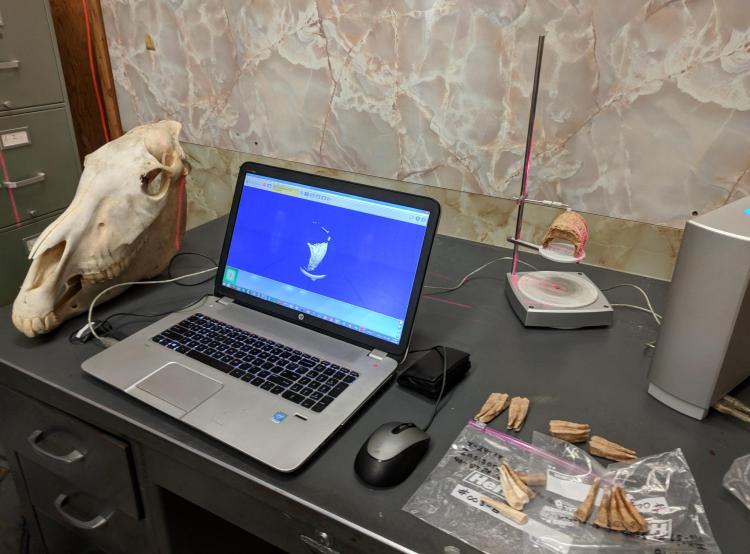 “The skeleton that you or I have is a chronicle of what we’ve done in our lives,” Taylor said. “If I were to keel over right now, and you looked at my skeleton, you’d see that I was right-handed or that I spend most of my hours at a computer.”

When Taylor first laid eyes on the Lehi horse in 2018, he was immediately skeptical that it was an Ice Age fossil. Ancient horses first evolved in North America and were common during the Pleistocene, he said, going extinct at about the same time as many other large mammals like mammoths. This horse, however, showed characteristic fractures in the vertebrae along its back.

“That was an eyebrow raiser,” Taylor said.

He explained that such fractures often occur when a human body bangs repeatedly into a horse’s spine during riding—they rarely show up in wild animals, and are often most pronounced in horses ridden without a frame saddle. So he and his colleagues decided to dig deeper.

DNA analyses by coauthors at the University of Toulouse in France revealed that the Lehi horse was a roughly 12-year-old female belonging to the species Equus caballus (today’s domestic horse). Radiocarbon dating showed that it had died sometime after the late 17th century. The horse also seemed to be suffering from arthritis in several of its limbs.

“The life of a domestic horse can be a hard one, and it leaves a lot of impacts on the skeleton,” Taylor said.

He added that scientists originally believed that the horse was so ancient in part because of its location deep in the sands along the edge of Utah Lake: Its caretakers appear to have dug a hole and intentionally buried the animal after it died, making it look initially as if it had come from Ice Age sediments.

And despite the animal’s injuries, which would have probably made the Lehi horse lame, people had continued to care for the mare—possibly because they were breeding her with stallions in their herd.

For Carlton Shield Chief Gover, a coauthor of the new study, the research is another example of the buried history of Indigenous groups and horses.

He explained that most researchers have tended to view this relationship through a European lens: Spaniards brought the animals to the Americas on boats, and white settlers shaped how Native peoples interacted with them.

But that view glosses over just how uniquely Indigenous the horse became in the Americas after those first introductions.

“There was a lot going on that Europeans didn’t see,” said Shield Chief Gover, a graduate student at CU Boulder and a tribal citizen of the Pawnee Nation. “There was a 200-year period where populations in the Great Plains and the West were adapting their cultures to the horse.”

For many Plains groups, horses quickly changed nearly every aspect of life.

He and Taylor hope that their research will, alongside Indigenous oral traditions, help to shed light on those stories. Taylor, for his part, suspects that the Lehi horse may not be the only set of remains mistakenly shelved with Ice Age animals in museum collections around the country.

“I think there are a lot more out there like this,” he said.

See the digital exibit in English and Spanish

CU Boulder neuroscientist Zoe Donaldson has found a new way to contribute to global science education. She and her team will spend much of August helping European high school students learn the finer points of gene manipulation in prairie voles. END_OF_DOCUMENT_TOKEN_TO_BE_REPLACED

Doctoral students Aaquib Tabrez and Matthew Luebbers, along with their advisor Bradley Hayes, used augmented reality Minesweeper to gain insight into a robot’s decision-making process. They were awarded runner-up for best student paper at an international conference. END_OF_DOCUMENT_TOKEN_TO_BE_REPLACED

With a project called Tinycade, graduate student Peter Gyory has set out to recreate that arcade parlor experience from childhood—entirely out of junk. END_OF_DOCUMENT_TOKEN_TO_BE_REPLACED
Return to the top of the page