Scientists peer inside an asteroid

Scientists peer inside an asteroid

Banner image: Artist's depiction of the OSIRIS-REx spacecraft swooping toward the asteroid Bennu to collect a sample of material from its surface. (Credit: NASA/Goddard/University of Arizona)

New findings from NASA’s OSIRIS-REx mission suggest that the interior of the asteroid Bennu could be weaker and less dense than its outer layers—like a crème-filled chocolate egg flying though space.

The results appear in a study published today in the journal Science Advances and led by the University of Colorado Boulder’s OSIRIS-REx team, including professors Daniel Scheeres and Jay McMahon. The findings could give scientists new insights into the evolution of the solar system’s asteroids—how bodies like Bennu transform over millions of years or more.

OSIRIS-REx rendezvoused with Bennu, an asteroid orbiting the sun more than 200 million miles from Earth, in late 2018. Since then, the spacecraft, built by Colorado-based Lockheed Martin, has studied the object in more detail than any other asteroid in the history of space exploration.

So far, however, one question has remained elusive: What’s Bennu like on the inside?

Scheeres, McMahon and their colleagues on the mission’s radio science team now think that they have an answer—or at least part of one. Using OSIRIS-REx’s own navigational instruments and other tools, the group spent nearly two years mapping out the ebbs and flows of Bennu’s gravity field. Think of it like taking an X-ray of a chunk of space debris with an average width about the height of the Empire State Building. 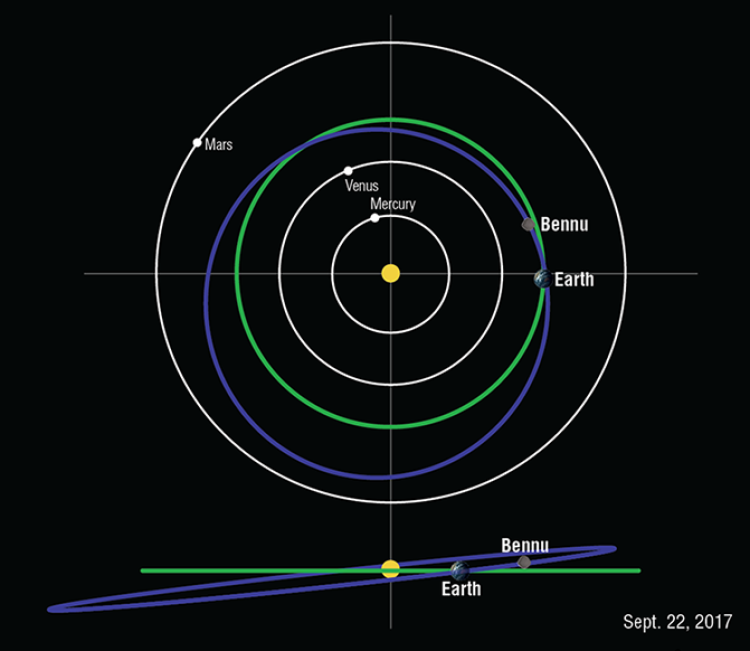 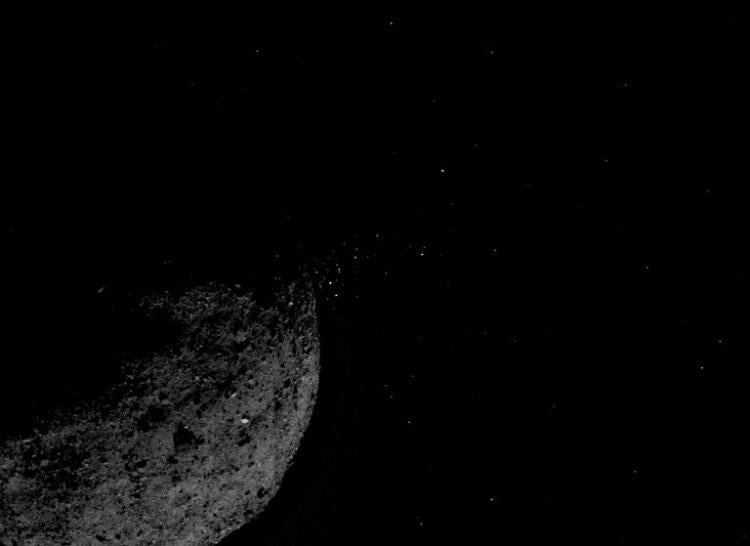 Top: Diagram of the orbit of Bennu in relation to Earth and other planets; bottom: Particles ejected from the surface of Bennu. (Credits: NASA/Goddard/University of Arizona/Lockheed Martin)

“If you can measure the gravity field with enough precision, that places hard constraints on where the mass is located, even if you can’t see it directly,” said Andrew French, a coauthor of the new study and a former graduate student at CU Boulder, now at NASA’s Jet Propulsion Laboratory (JPL).

What the team has found may also spell trouble for Bennu. The asteroid’s core appears to be weaker than its exterior, a fact that could put its survival at risk in the not-too-distant future.

“You could imagine maybe in a million years or less the whole thing flying apart,” said Scheeres, a distinguished professor in the Ann and H.J. Smead Department of Aerospace Engineering Sciences.

Of course, that’s part of the fun of studying asteroids. Scheeres explained that Bennu belongs to a class of smaller bodies that scientists call “rubble pile” asteroids—which, as their name suggests, resemble loosely held-together mounds of debris.

“None of them have sat out there unchanging since the dawn of the solar system,” Scheeres said. “They’re being changed by things like sunlight affecting how they spin and collisions with other asteroids.”

To study how Bennu and other similar asteroids may change, however, he and his colleagues needed to take a peek inside.

This is where the team got lucky. When OSIRIS-REx first arrived at Bennu, the spacecraft spotted something unusual: Over and over again, tiny bits of material, some just the size of marbles, seemed to pop off the asteroid and into space. In many cases, those particles circled Bennu before falling back down to the surface. Members of the mission’s radio science team at JPL were able to witness how the body’s gravity worked first-hand—a bit like the apocryphal story of Isaac Newton inferring the existence of gravity after observing an apple falling on his head.

“It was a little like someone was on the surface of the asteroid and throwing these marbles up so they could be tracked,” Scheeres said. “Our colleagues could infer the gravity field in the trajectories those particles took.”

In the new study, Scheeres and his colleagues combined those records of Bennu’s gravity at work with data from OSIRIS-REx itself—precise measurements of how the asteroid tugged on the spacecraft over a period of months. They discovered something surprising: Before the mission began, many scientists had assumed that Bennu would have a homogenous interior. As Scheeres put it, “a pile of rocks is a pile of rocks.”

But the gravity field measurements suggested something different. To explain those patterns, certain chunks of Bennu’s interior would likely need to be more tightly packed together than others. And some of the least dense spots in the asteroid seemed to lie around the distinct bulge at its equator and at its very core.

“It’s as if there is a void at its center, within which you could fit a couple of football fields,” Scheeres said.

The asteroid’s spin may be responsible for that void. Scientists know that the asteroid is spinning faster and faster over time. That building momentum could, Scheeres said, be slowly pushing material away from the asteroid’s center and toward its surface.  Bennu, in other words, may be in the process of spinning itself into pieces.

“If its core has a low density, it’s going to be easier to pull the entire asteroid apart,” Scheeres said.

For the scientist, the new findings are bittersweet: After measuring Bennu’s gravity field, Scheeres and his team have mostly wrapped up their work on the OSIRIS-REx mission.

Their results have contributed to the mission’s sample analysis plan—currently in development. The returned sample will be analyzed to determine the cohesion between grains—a key physical property that affects the mass distribution observed in their study.

“We were hoping to find out what happened to this asteroid over time, which can give us better insight into how all of these small asteroids are changing over millions, hundreds of millions or even billions of years,” Scheeres said. “Our findings exceeded our expectations.”

CU's Laboratory for Atmospheric and Space Physics will contribute scientific data systems and mission operations expertise to a NASA robotic mission to study the lunar surface prior to renewed human exploration. END_OF_DOCUMENT_TOKEN_TO_BE_REPLACED

Disks made up of rocks and dust swirl around stars across the galaxy. These features are the "fossil record of planet formation," said astrophysicist Meredith MacGregor. END_OF_DOCUMENT_TOKEN_TO_BE_REPLACED

New research adds another piece of evidence to the scientist philosophy known as the mediocrity principle: Galaxies are, on average, at rest with respect to the early universe. Jeremy Darling, a CU Boulder astrophysics professor, recently published this new finding in the journal Astrophysical Journal Letters. END_OF_DOCUMENT_TOKEN_TO_BE_REPLACED
Return to the top of the page