How small particles could reshape Bennu and other asteroids 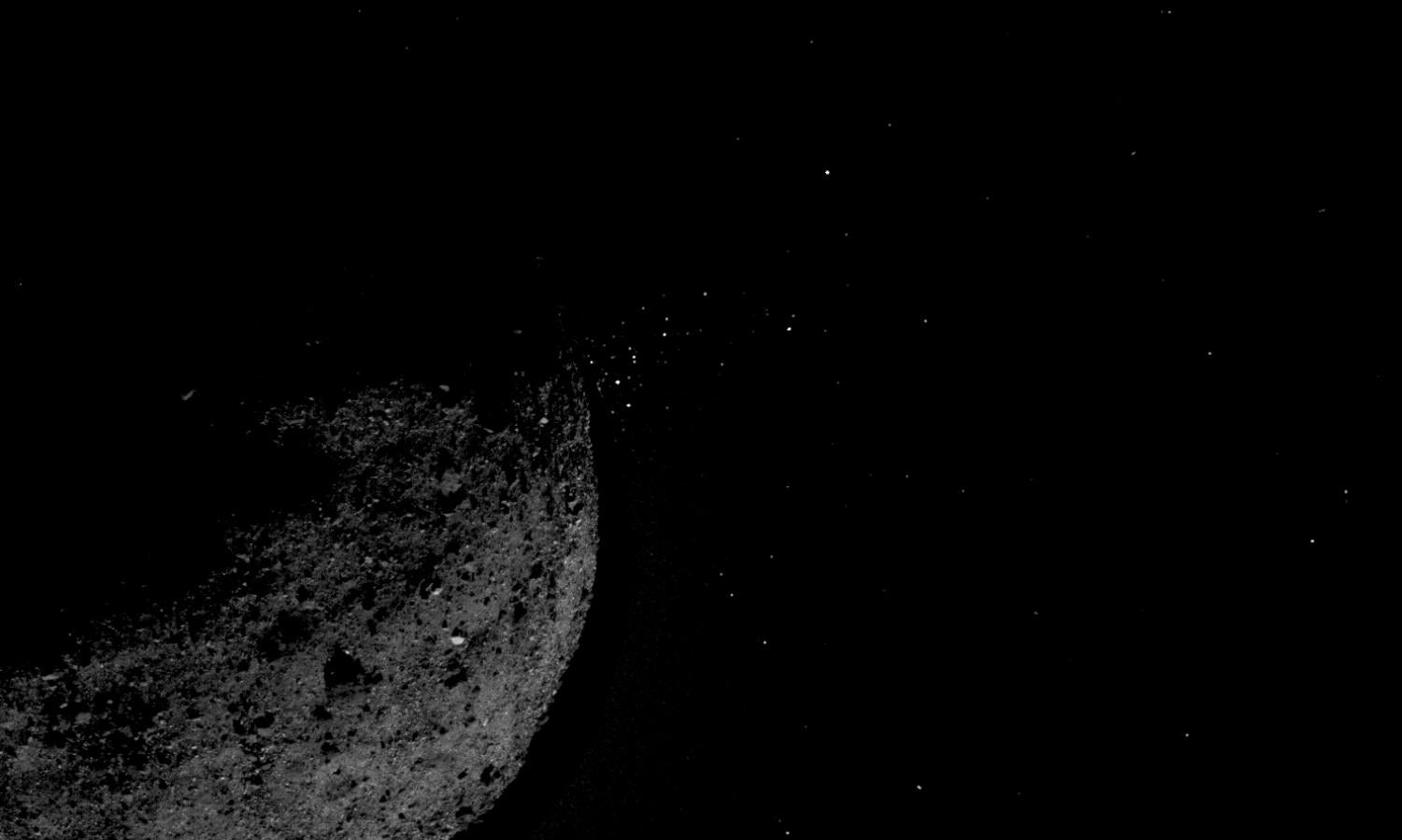 OSIRIS-REx observed small bits of material leaping off the surface of the asteroid Bennu on Jan. 19, 2019. (Credit: NASA/Goddard/University of Arizona/Lockheed Martin)

In January 2019, NASA’s OSIRIS-REx spacecraft was orbiting the asteroid Bennu when the spacecraft’s cameras caught something unexpected: Thousands of tiny bits of material, some just the size of marbles, began to bounce off the surface of the asteroid—like a game of ping-pong in space. Since then, many more such particle ejection events have been observed at Bennu’s surface.

OSIRIS-REx is an unprecedented effort to investigate what makes up asteroids like Bennu and how they move through space. But, as those leaping particles show, the mission has already delivered a few surprises.

“We’ve been studying asteroids for a long time and no one had ever seen this phenomenon before—these little particles getting shot off of the surface,” said Daniel Scheeres, distinguished professor in the Ann and H.J. Smead Department of Aerospace Engineering Sciences. He leads the radio science team for OSIRIS-REx along with CU Boulder’s Jay McMahon.

Now, a series of new studies seeks to recreate and understand the observed particle ejection events, piecing together what happened and why. Scheeres and McMahon are focusing on one question in particular: How might the leaping particles change the long-term fate of Bennu and other asteroids like it?

In research published in the Journal of Geophysical Research: Planets, the duo and their colleagues report that such seemingly small occurrences may add up over time—perhaps even helping to give the asteroid its telltale shape, which is often compared to a spinning top.

“We want to know what that means for the bigger picture of how asteroids live their lives,” said McMahon, an assistant professor of aerospace engineering.

The University of Arizona leads science operations for OSIRIS-REx, which was built by the Colorado-based Lockheed Martin. NASA’s Goddard Space Flight Center in Maryland manages the overall mission.

McMahon added that the life of some asteroids can be pretty chaotic. One class of these bodies, which scientists call “active” asteroids, loses a significant amount of material on an ongoing basis.

“They’re almost a cross between a comet and an asteroid,” McMahon said. “They’re losing mass, and it’s substantial enough that we can see it from Earth.” 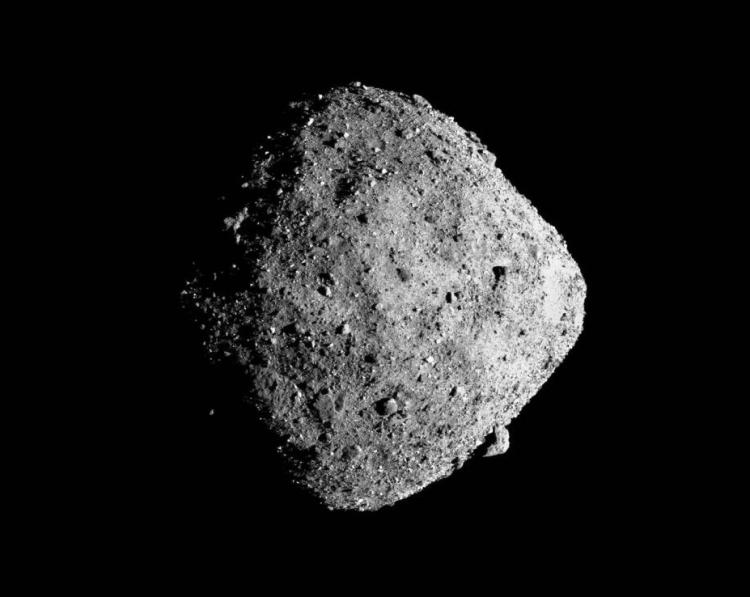 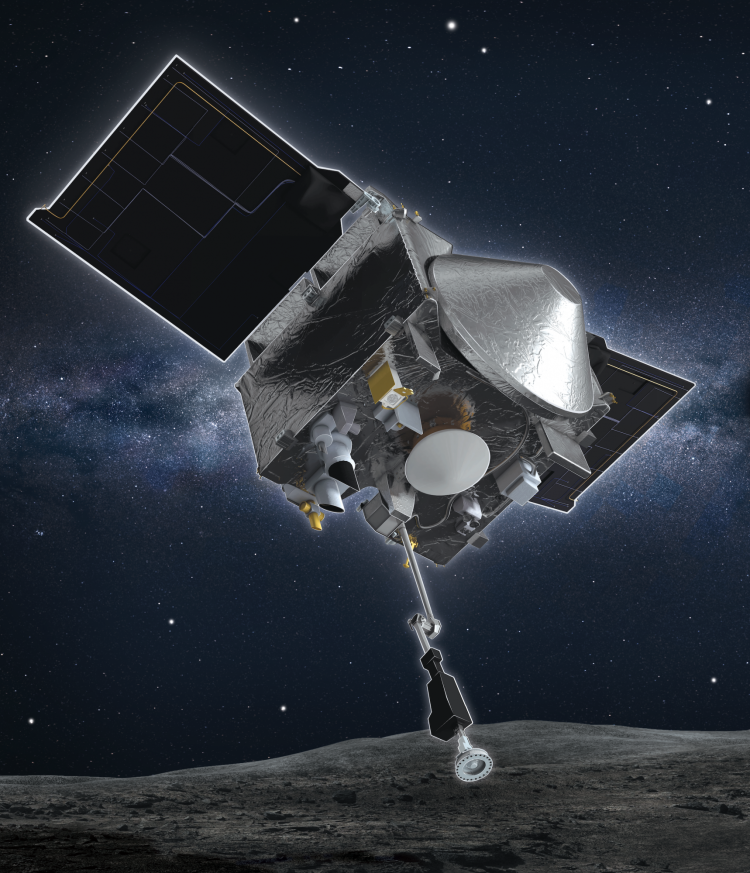 Top: A view of the Asteroid Bennu showing the bulge at its equator; bottom: An artist's depiction of OSIRIS-REx using its extendable arm to collect a sample of material from the surface of Bennu. (Credits: NASA/Goddard/University of Arizona)

Until recently, no one knew that the same thing could happen on a much smaller scale. But that’s precisely the case on Bennu. One hypothesis suggests that rapid shifts in temperature could be causing the surface of the asteroid to warp and crack, popping off small bits of material. Another study has contended that the ejections could be the result of small meteoroids smacking into Bennu.

Based on OSIRIS-REx’s observations, the particles ejected from Bennu can be as big as softballs and hit speeds of about 7 miles an hour. Even more surprising, McMahon said, a small number of these bits of debris seemed to do the impossible: They flew off the surface of Bennu, then orbited the asteroid for several days or longer.

Put differently, basic orbital calculations suggest that all of these particles should do one of two things: Jump off the surface and fall right back down or escape from Bennu’s gravity and never come back.

To find out why some aren’t playing by the rules, McMahon and his colleagues used detailed computer models to track the trajectories of more than 17,000 test particles ejected from Bennu. They discovered a small subset of those seem to get an assist from an unlikely source: the sun.

McMahon explained that as these objects leap off the asteroid, they are exposed to heat and radiation coming from the sun and from Bennu itself—just a little bit, but enough to occasionally give them a slight boost in speed. With the right push, those particles can, essentially, fail at falling.

“The particle gets really close to the surface and just misses,” McMahon said. “If it can do that a few times then it can get into a situation where it can live in orbit for quite a while.”

In another study published in the same series, a team led by Scheeres and McMahon tried to figure out if ejection events might even influence Bennu’s own orbit around the sun—the answer is probably not.

The group did discover something else unusual: When particles eventually land on Bennu’s surface, many appear to disproportionately fall near its equator where the asteroid has a distinct bulge. As a result, these events could be reshaping the asteroid over thousands or millions of years by moving mass from its north and south to its middle.

The findings are a prelude to another major event in the life of Bennu. Next month, OSIRIS-REx will get closer to the asteroid than ever before. Once there, the spacecraft will use a retractable arm to grab a sample from the surface and bring it back home.

Scheeres and colleagues expect even more unexpected findings from an already surprising asteroid.

CU Boulder has been selected as a member of the United States Space Command Academic Engagement Enterprise, a new national program designed to expand collaboration and academic exchanges between universities and Space Command. END_OF_DOCUMENT_TOKEN_TO_BE_REPLACED

Since July 2022, a miniature satellite about the size of a shoebox has been orbiting Earth and monitoring how much solar energy reaches the atmosphere, one of the "most important" Earth science measurements. Now, scientists are finalizing their analysis of the first five months of the testing. END_OF_DOCUMENT_TOKEN_TO_BE_REPLACED

The historic spacecraft soon hit Earth's atmosphere flying at speeds of almost 25,000 mph. CU Boulder aerospace engineer Iain Boyd breaks down what will happen to the capsule, and how NASA will keep it safe on reentry. END_OF_DOCUMENT_TOKEN_TO_BE_REPLACED
Return to the top of the page