A year in the ice: Researchers join historic mission to the Arctic 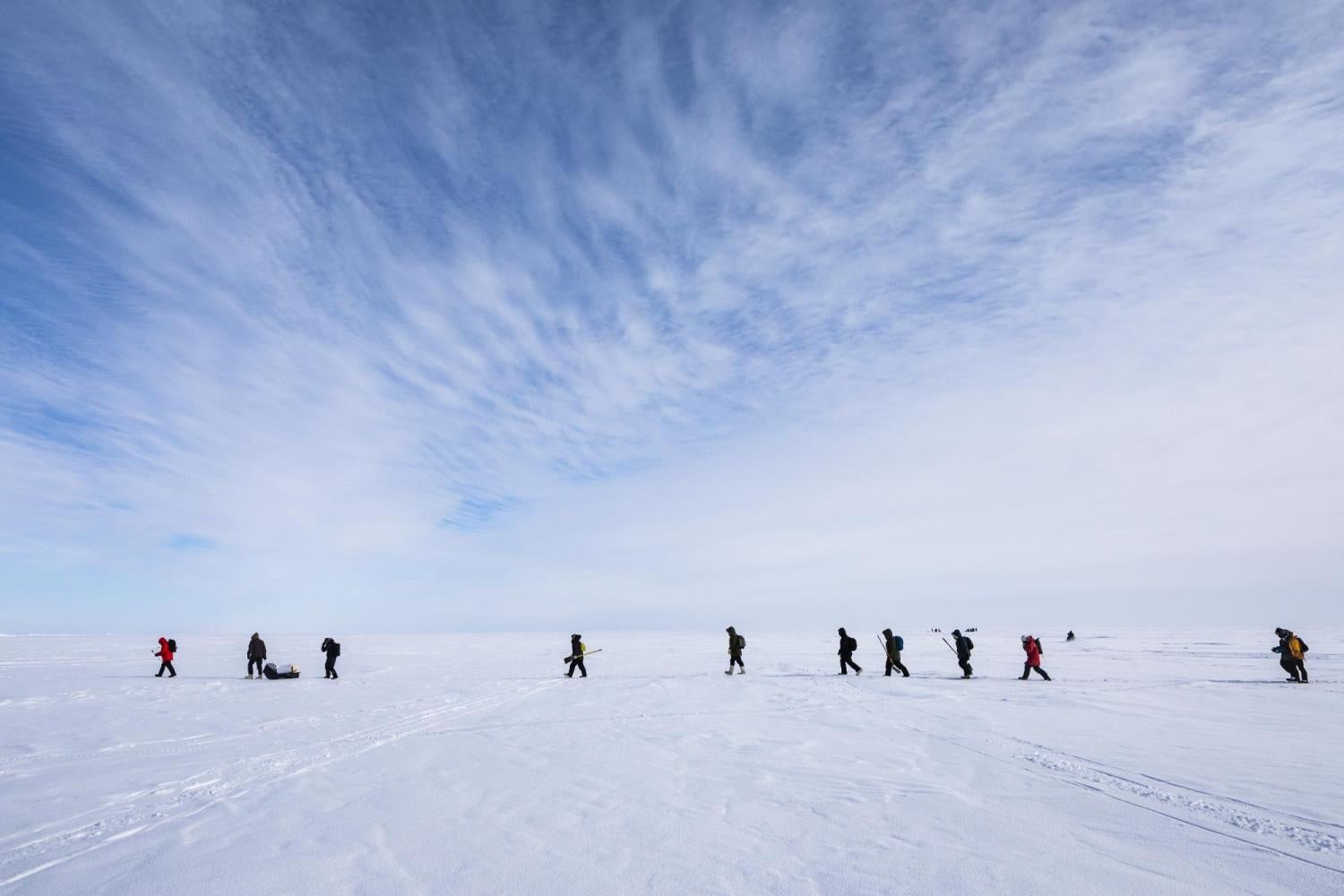 The Arctic is warming faster than any other region on the planet, with enormous implications for the future of global climate. This year, CU Boulder researchers will play a leading role in a historic expedition to study one of the Earth’s most remote environments firsthand.

The unprecedented Multidisciplinary Drifting Observatory for the Study of Arctic Climate (MOSAiC) will send a German icebreaker into Arctic waters, where it will freeze itself into the winter pack ice to drift for an entire year, allowing around 500 scientists from 17 countries to take detailed measurements of the ice, ocean and air. Heavy aircraft and ships will periodically ferry researchers and supplies to and from the mainland.

Departing in September from Tromsø, Norway, the R/V Polarstern will park itself in the ice pack and then drift towards the North Pole using the natural patterns of the ice, allowing those onboard to observe the atmospheric and oceanic processes that affect ice formation, evolution and decay over a full season.

The vessel will function as a comprehensive observatory and base camp, operating an array of buoys, ice-tethered profilers, remote stations, underwater drifters, unmanned aerial systems and more.

It’s an opportunity that comes after more than a decade of planning from atmospheric scientist Matthew Shupe, who will be aboard for the mission’s first two-plus months and then again in summer 2020.

“The foundation of MOSAiC is seeing the entire Arctic system in different ways, from many different angles,” said Shupe, a researcher with CU Boulder’s Cooperative Institute for Research in Environmental Sciences (CIRES) and NOAA. “It’s really turned out to be an all-star team of Arctic researchers, with expertise from all around the world working on a shared vision.”

The expedition, which is being spearheaded by the Germany-based Alfred Wegener Institute (AWI), will have a total budget over $130 million. More than two dozen CU Boulder researchers will participate in MOSAiC, funded with more than $10 million from the National Science Foundation, the Department of Energy and NASA. 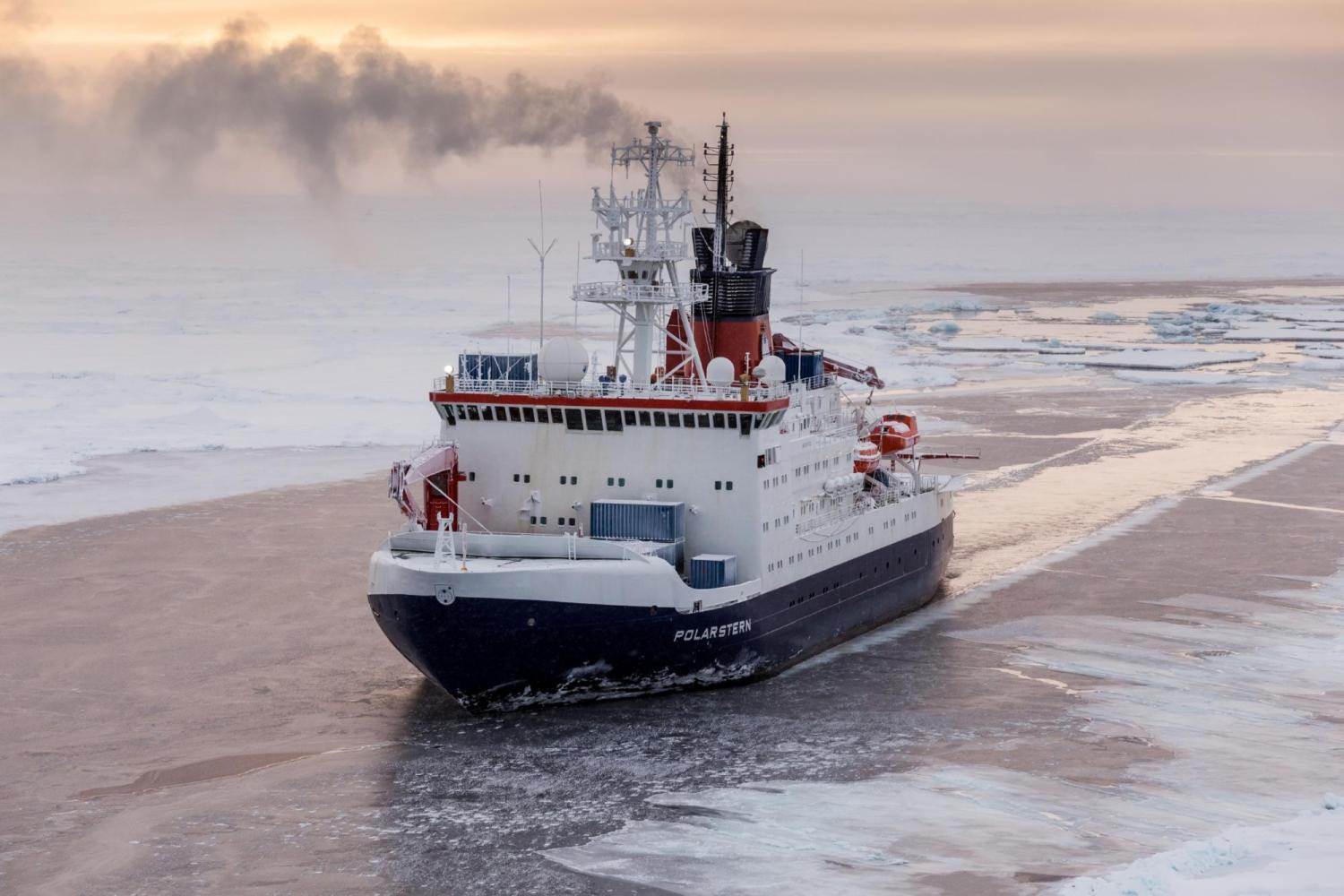 One of the mission’s key goals, Shupe said, is to untangle what are known as coupled processes, such as the complex energy interactions between clouds, water, ice and air.

“How does energy flow through the system?” said Shupe. “The sea ice is the integrator, where all of these factors converge.”

Loss of sea ice in recent decades has exposed more open water, reducing solar reflectivity and allowing more heat to be trapped in the system—a potentially devastating feedback loop. Scientists are racing to understand these processes before it’s too late.

Twenty years ago, Shupe was aboard the Surface Heat Budget of the Arctic Ocean (SHEBA) study, an international U.S.-led expedition which traveled to the Arctic to study heat transfer processes. That voyage helped shape his scientific career, he said, and MOSAiC will mark another giant leap forward in evaluating current and future models in ways that have never been possible before.

Shupe and a team of around 10 colleagues—including CIRES research scientists Ola Persson, Dave Costa and Chris Cox—have been developing their instrumentation for MOSAiC for the past couple years, with dedicated support from CU Boulder, NOAA and CIRES administrators.

“It’s certainly desirable to observe the Arctic remotely, but you can’t look at these processes in a detailed way without being there,” Shupe said. “You need sophisticated instruments like cloud radar that can’t be operated autonomously. From a biological standpoint, there are lots of mandatory analyses that require physical samples from the field.”

Science in the Arctic necessitates a hearty dose of survival training to prepare for a landscape that is all but certain to feature minus-40 degree Fahrenheit temperatures, high winds, months of total darkness, whiteouts and unpredictable ice conditions.

“The first and most important measure of success: no injuries,” Shupe said.

In April, several dozen MOSAiC researchers attended a National Science Foundation-sponsored training session in Utqiagvik, Alaska, near the northernmost point in the United States. There, they learned how to dig snow pits, drive snowmobiles and watch out for polar bears.

Shupe, who plans to deploy three metal sleds loaded with sensitive instruments for measuring near-surface meteorological and energy budget properties, says that every single piece of equipment needs to be winter-proofed and bear-proofed.

“Replacements will be hard to come by,” he deadpanned.

Back in Boulder, Colorado, on a 90-degree day in July, researchers gathered in a NOAA classroom to learn even more practical cold weather survival skills. The safety instructor, Kevin Pettway led the group in a series of exercises and drills ranging from tying a figure-8 knot to using ice screws for a guyline to improvising a gear “burrito” to wrap up anyone suffering from hypothermia.

The fickle ice itself, however, could be the greatest challenge. While multiyear ice has survived previous summer melt and refrozen to become more stable than its first-year counterpart, it still features impassible ridges and melt ponds that can be apparent one day and disguised by fresh snowfall the next. Mile-long cracks can form—and disappear—with little to no warning.

“You have to always look for the signs of change in the ice,” Pettway said, emphasizing situational awareness above all. “Cracks can be covered up in a day.”

MOSAiC staff members will take painstaking efforts to safeguard the research site, including flagging systems, radio communication, navigational aides, fencing around the ship’s perimeter and armed security details to keep the bears away. Still, Pettway said, tunnel vision is a real thing on a featureless landscape and GPS won’t always be reliable that far north.

“If you can’t clearly see what you’re walking toward, stop,” he said. 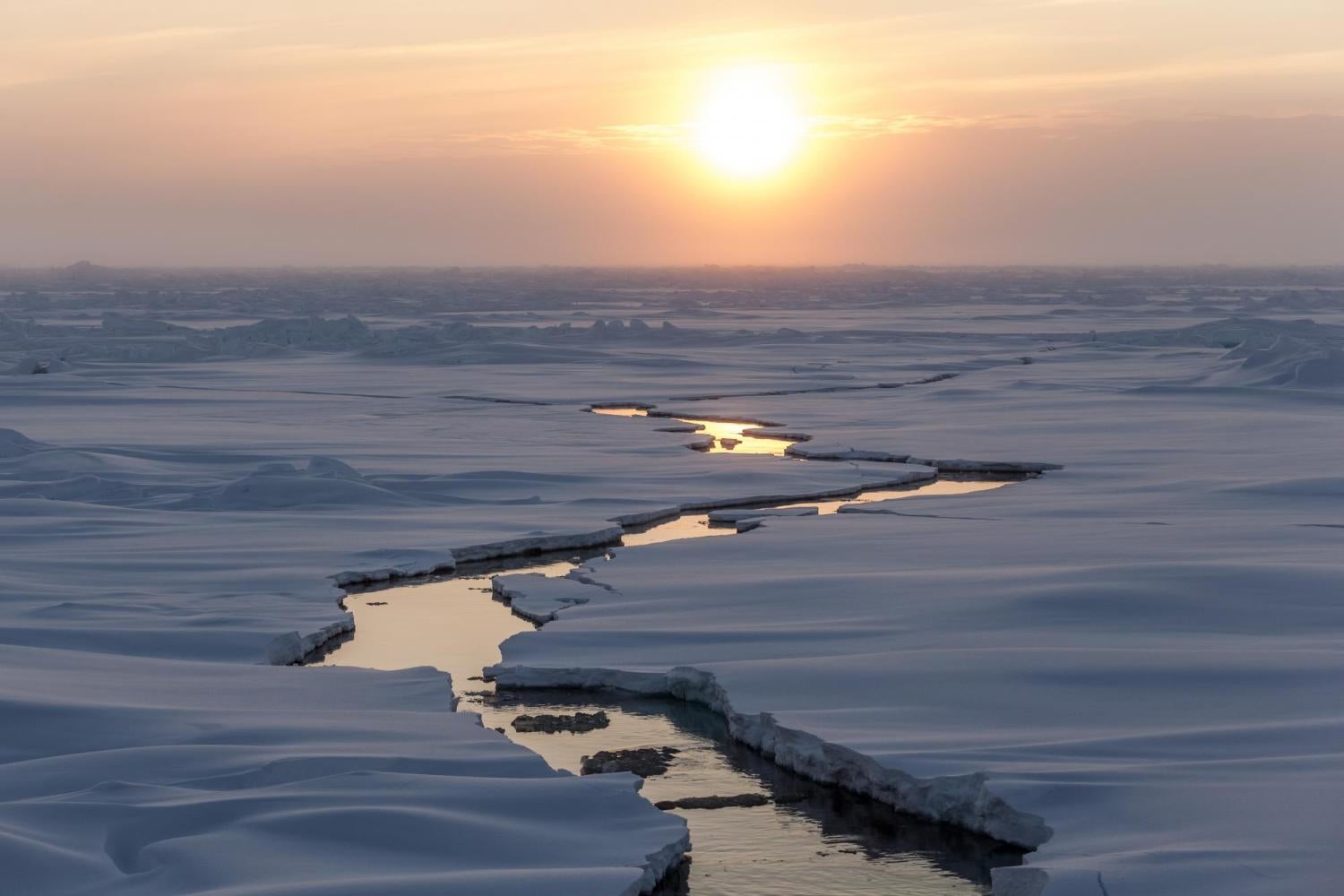 MOSAiC’s transpolar drift has historical precedent dating back centuries. In 1893, the Norwegian explorer Fridtjof Nansen and his crew deliberately froze their ship near Siberia in the hopes of drifting to the North Pole. The voyage did not reach the pole successfully, but nevertheless contributed valuable information on oceanography and current patterns.

“Polar regions are fascinating because they’re so far away and have inspired multiple generations to seek out knowledge,” said Gold. “We see tremendous opportunity to engage student interest around this kind of exploration and engineering.”

Gold will be aboard the Polarstern’s sister vessel and support ship, the R/V Akademik Federov, during the first leg of the mission. While in the field, the Federov and the Association of Polar Early Career Scientists (APECS) will host MOSAiC School 2019, a program for 20 international graduate students to gain hands-on research experience and become ambassadors to schools in their home countries.

Among those earning a coveted berth: CU Boulder engineering PhD student Sean Horvath, who studies the variability of summer Arctic sea ice in the Department of Civil, Environmental and Architectural Engineering. He expects that he and his fellow students will lead lectures about Arctic field work and help set up the various sensors being deployed for the year.

“I’m most excited about finally seeing the area I’ve been studying for so long,” said Horvath. “I don’t think there’s a single aspect about this trip that will not be beneficial to my future career, but I think being exposed to the various aspects of Arctic science, data collection techniques and networking with other researchers will really help propel me forward.”

And if all goes to plan, everyone at home will have the opportunity to experience the Arctic’s staggeringly beautiful pancake ice fields and aurora-lit night skies, too. Through a partnership with Fiske Planetarium, cinematographers on board will collect stunning high-definition footage to create a full-length planetarium show to be released internationally in 2020.

The hope, Gold says, is that MOSAiC’s scientific and educational impact extends far beyond a single year in the ice.

“We will come home with a wealth of rich materials to fill out lesson plans and demonstrate the relevance of these Arctic processes,” Gold said. “We’re also building bridges to the next group of young polar scientists.”

In the months to come, numerous CU Boulder researchers from all across campus will travel to the Polarstern in order to begin their experiments, some of which will last nearly the entire time the ship is encased in ice.

CIRES research scientist Gijs de Boer is collaborating with John Cassano of the Department of Atmospheric and Oceanic Sciences and CU Boulder aerospace engineering professors Dale Lawrence and Brian Argrow to fly drones to collect data on near surface conditions. The drones can take fine-grain airborne measurements of the lower atmosphere without a runway or other cumbersome infrastructure used by traditional planes that aren’t feasible on the ice. Their research could eventually lead to future unmanned deployments.

Hélène Angot, a post-doctoral researcher in the Institute for Arctic and Alpine Research (INSTAAR), will join the mission in mid-2020. She and her colleagues, Professor Detlev Helmig of INSTAAR and Byron Blomquist of CIRES, will study the fate of contaminants and volatile organic compound emissions exacerbated by climate change, such as airborne mercury.

“Trace gases can be deposited on sea ice or be released in the atmosphere, contributing to ozone formation,” Angot said. “The Arctic is changing and we don’t fully understand it yet, but we need to in order to better predict the next 20 to 30 years. This is perhaps the last time that we’ll have this kind of opportunity.”

There is still lots to do between now and September. Plans must be finalized. Gear must be shipped. Manifests must be checked and double checked. A small army of scientists, crew members and other support staff will descend on Tromsø.

But as the mission’s start date draws near, Shupe is excited to return to the Arctic and bring some of the world’s most advanced scientific resources to bear on an issue with urgent global consequences.

“CIRES, CU and NOAA are at the forefront of polar research, so it was a natural fit for us to take part in this truly exciting international collaboration,” Shupe said.

Mitigating climate change by significantly reducing carbon emissions this decade will require big transitions in all sectors, from energy and transportation to construction and industry. But significant reductions in global emissions are possible, experts say. END_OF_DOCUMENT_TOKEN_TO_BE_REPLACED

Clint Carroll, associate professor in the Department of Ethnic Studies, studies Cherokee access to gathering wild plants and land use management, and tends to the land in his own backyard. END_OF_DOCUMENT_TOKEN_TO_BE_REPLACED

With the planet already warming, technical fixes to addressing a changing climate are important, experts say, but they can only get us so far. We need social fixes, too. END_OF_DOCUMENT_TOKEN_TO_BE_REPLACED
Return to the top of the page