For several months in 2018 and 2019, a handful of engineering students at CU Boulder became walker repairers extraordinaire.

The students, four undergraduates studying mechanical engineering, set up shop on a regular basis at Sunrise at Flatirons, a senior living community in Broomfield, Colorado. There, they fixed squeaky wheels, loose brakes and whatever other problems residents had with their walkers. Sometimes the students, most of whom are graduating this spring, were happy just to chat.

“They loved talking to us, which has been super exciting,” said team member Timothy Visos-Ely.

Visos-Ely and his fellow engineers Humsini Acharya, Andrew Plum and Max Watrous, however, weren’t just in it for the squeaky wheels.

The students also worked with those same senior residents to test out their new invention—an accessory for walkers that the team hopes to make widely available to seniors and others. They believe their device could help prevent debilitating falls. 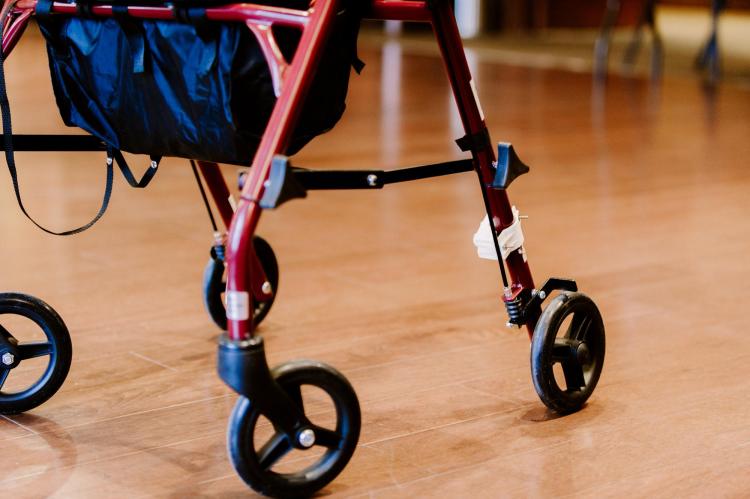 According to the U.S. Centers for Disease Control, falls among senior citizens lead to roughly 3 million emergency hospital visits every year. But Visos-Ely said that technology-savvy entrepreneurs have largely ignored the needs of this community for years.

That’s something that his group wanted to change, especially as many baby boomers get older.

“Industry hasn’t focused on this demographic for so long. It’s been neglected,” he said. “Right now is the perfect time for a company like ours to get into this space.”

The judges at this year’s New Venture Challenge, a competition for entrepreneurs sponsored by CU Boulder, concurred. They awarded Visos-Ely, Acharya, Plum and Watrous, who together founded a company called Stride Tech, first place and a $100,000 prize.

“I think it is a very promising startup,” said Jason Mendelson, one of those judges and a co-founder of the Boulder-based Foundry Group. “What they are working on has the potential to save lives, injuries and costs, while also maintaining the mobility independence of its customers.”

Visos-Ely’s pursuit of the walker of the future is also a personal one.

He was inspired to launch the project when his own grandmother, who suffered from several strokes, fell while using her walker. She recovered from her injuries but was hesitant to leave her home afterward.

“She thought the walker was going to be there when she fell, but it wasn’t,” said Visos-Ely, now CEO of Stride Tech.

He and his fellow students believed that if older people could be safer when using their walkers, they might be able to stay independent for a longer period of time. 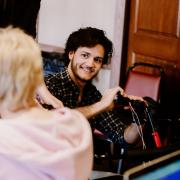 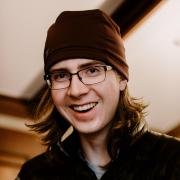 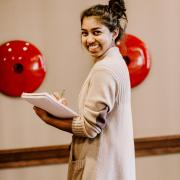 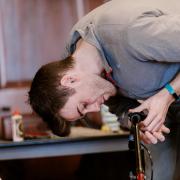 The quartet took up the project in earnest in spring 2018 when the students enrolled in a hands-on class offered through the Engineering Plus program called “Invention and Innovation.” They continued their work during a year-long Capstone Senior Design course in 2018-2019.

The students’ first prototype, which they call Smart Step, takes a simple approach toward the complex problem of falls among walker-users. The first part of that is a set of hand grips that vibrate if a person puts too much weight on their assistive device.

Next up, the team built a sensor that sits near the base of a walker and collects data on users’ walking patterns. Care providers can then use that data to help shape future health interventions.

Visos-Ely added that it’s all pretty easy to use. “They just have to plug it in every night,” he said. “That’s the only interaction they have to have with the device at all.”

He and his team members give a lot of the credit for their success to the senior citizens who helped test out their early designs. The feedback the group received from these walker-users was “brutally honest,” Andrew Plum said.

One woman, for example, complained that the walker grips were ugly. At the time, the group was only making them in black. Now, those grips come in a range of colors.

The Stride Tech team has no intention of slowing down, either. Now that these soon-to-be-graduating students have won the New Venture Challenge, they’re looking for ways to bring their prototype to market.

“We want to take this minimum viable product and then use the data we collect to create longer-term solutions,” Max Watrous said.

In part, that’s because team members believe that Stride Tech has a real shot at becoming a successful business—while also building new links between the tech community and the elderly.

Ultimately, it’s why Humsini Acharya got into engineering. “You get to be a nerd and do all this math and science,” she said. “But it’s also this real way that you can help people.”

A recent survey shows more than 60% of Americans know “nothing at all” or only “a little bit” about what Juneteenth is or its importance in American history. Ashleigh Lawrence-Sanders, professor of African American and Black cultural history, discusses how and why we celebrate Juneteenth. END_OF_DOCUMENT_TOKEN_TO_BE_REPLACED

Life expectancy of Native Americans in the U.S. dropped by nearly five years during the COVID-19 pandemic, new research reveals. The study also found that while the rest of the developed world is rebounding in terms of life expectancy, the United States is not. END_OF_DOCUMENT_TOKEN_TO_BE_REPLACED

Is news coverage inspiring more mass shootings? Not necessarily, but with each incident comes complicated questions for journalists, says CU Boulder Professor Elizabeth Skewes. END_OF_DOCUMENT_TOKEN_TO_BE_REPLACED
Return to the top of the page