The race is on: Researchers from CU Boulder, CU Denver and the Boston-based Scientific Systems Company Inc. (SSCI) have partnered to design drones that can explore underground environments such as subway tunnels, mines and caves.

The U.S. Defense Advanced Research Projects Agency (DARPA) awarded the team a $4.5 million grant to support its participation in its national Subterranean Challenge, which will end in fall 2021. The partners will compete against five other funded teams across the country to complete three increasingly difficult undeground challenges.

Sean Humbert, a professor in CU Boulder’s Department of Mechanical Engineering, said the project will push the bounds of what autonomous systems can do. The work may one day enable teams of flying and rolling drones to work together to search through dark and dangerous environments to find human survivors of earthquakes, chemical spills and more.

Humbert added that the team shows the state’s growing bona fides in the field of robotics.

“The DARPA Subterranean Challenge was a great opportunity to pull this team together, leveraging the strengths of both campuses,” said Humbert, who is leading the project. “It’s a great win for the state of Colorado to have two of its major campuses collaborating on this.”

“The solution DARPA wants is clearly beyond the current state-of-the-art and will require interdisciplinary and inter-organization innovation and out-of-the-box thinking,” said Ron Rorrer, professor of mechanical engineering at CU Denver.

The fast-paced challenge will take part in three stages. In September 2019, the group will kick off the competition by sending drones on a mock search and rescue operation down miles of steam tunnels. Six months later, the competing teams will graduate to large tunnels, such as those that make up the New York subway system. And, finally, they’ll travel to natural caves, which will add a host of hazards, including mud, rocks and the potential for cave-ins.

“The robot team needs to map the environment while searching for important markers like heat emitting from a lost person or a chemical leak,” said Eric Frew, one of the team members and a professor in CU Boulder’s Ann and H.J. Smead Department of Aerospace Engineering Sciences. “And the entire operation has to occur autonomously with no direct input from the human operators.”

Such a feat of hide-and-seek will bring numerous engineering challenges. To start, typical multirotor drones can only fly for 15 to 20 minutes before their batteries run out. The DARPA competition, in contrast, will require them to keep going for two to three hours. And those drones will have to communicate with each other and the surface from deep underground.

To tackle those challenges, Humbert and his colleagues have brought together a diverse team of engineers. Researchers at CU Denver will focus on the power and communication challenges. The CU Boulder group will develop software and algorithms to enable the drone fleets to work together without a human controlling them.

The project will have impacts beyond subterranean search and rescue, too. Making drones that can navigate such difficult environments may also improve how they work in safer settings around people, such as in factories or warehouses.

“Caves, mines and subway tunnels are maze-like and visually redundant,” said team member Christoffer Heckman, an assistant professor in the Department of Computer Science at CU Boulder. “These environments are going to demand a fundamentally different approach to autonomous systems, which will see broad use in other domains as well.”

“We are thrilled by the potential of this project and the collaboration with colleagues in Boulder,” said Martin Dunn, dean of CU Denver’s College of Engineering and Applied Science. “It is a fantastic exemplar of two elements of our college strategy—engaging in interdisciplinary research and education pointed toward industries of the future, and doing so through partnerships across industry, academia and government.”

The project highlights the potential of CU Boulder's recently-formed Interdisciplinary Research Themes (IRTs), said Bobby Braun, dean of CU Boulder’s College of Engineering and Applied Science. Launched in 2018, these initiatives—including an effort focusing on autonomous systems—tap the expertise of researchers from across the college and empower them to generate research that will make a difference in the lives of people in and out of Colorado.

“The output of our newly-launched Interdisciplinary Research Themes is already proving to be significant,” Braun said. “This project is one of many success stories that will impact the future of industry in Colorado and our nation.”

The global shortage of semiconductors—the computer chips that products such as smartphones, laptops, cars and even washing machines rely on—are motivating engineers to improve the inspection of the silicon wafers from which semiconductors are fabricated. To help, students have built a silicon wafer center-finding improvement device. END_OF_DOCUMENT_TOKEN_TO_BE_REPLACED 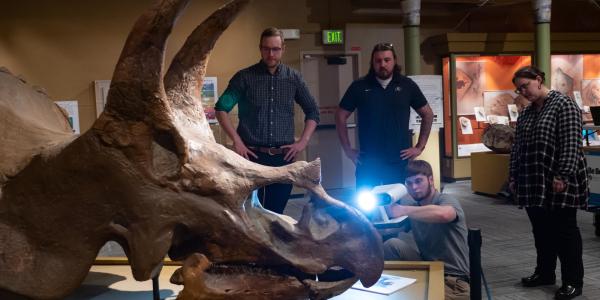 The fossil skull of a Triceratops has sat on display on campus since 1981. Now, the specimen is heading back to the Smithsonian Institution in Washington, where paleontologists will continue to study it to answer new questions about this fan-favorite dinosaur species. END_OF_DOCUMENT_TOKEN_TO_BE_REPLACED
Return to the top of the page