More than 87 percent of medical marijuana users report smoking or ingesting it for pain-related conditions. Yet for many, the cognitively impairing properties of its active ingredient, THC, make cannabis impractical as an everyday painkiller.

A new, first-of-its kind study by CU Boulder researchers suggests that legal-market cannabis strains containing a lesser-known compound called cannabidiol (CBD) in addition to THC (9-delta-tetrahydrocannabinol) may have a more powerful anti-inflammatory effect while intoxicating users less and having less potential for abuse.

“Pain is the most common reason cited for medical cannabis use, with people out there using these products every day. But they have no data on whether there are any particular cannabinoids or doses that hit that magic balance, where their pain is mitigated, but they are not walking around feeling impaired,” said corresponding author Cinnamon Bidwell, an assistant research professor at the Institute of Cognitive Science. “Our preliminary data suggest that when people use a CBD-containing strain they show less intoxication, less cognitive impairment and less craving.”

The small study, published in March in the journal Cannabis and Cannabinoid Research, is the first to use the lab’s new observational method for assessing the acute physiological and cognitive impacts of legal market cannabis strains on real-world users.

While 29 states have legalized medicinal use and eight states have legalized recreational use, marijuana remains illegal at the federal level, and researchers are prohibited from handling it, providing it to research subjects or being present while subjects use cannabis. Some scientists have conducted studies on government supplied strains, but CU Boulder research has shown those strains contain less THC and a less diverse array of cannabinoids than real-world strains.

“There is currently limited or no data on how the varying strengths of cannabis products available across the United States affect use and intoxication levels,” Bidwell said. “We want to address this gap.”

Bringing the lab to the people 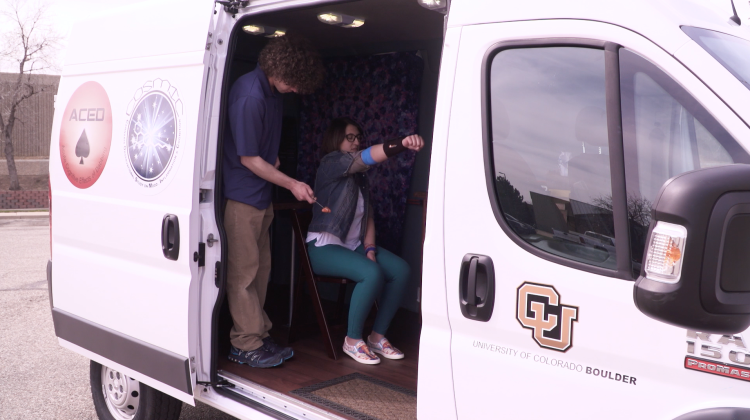 For the study, the team recruited 24 healthy male cannabis users age 21 to 34 who lived within a 15-minute drive of the laboratory. They were randomly assigned to use one of two strains, which they obtained themselves at a local dispensary, over three days. One strain contained 17 percent THC and no CBD, and the other contained 8 percent THC and 16 percent CBD.

On the third day, immediately after using cannabis, participants were picked up by research staff and brought to the lab for testing of blood, mood, intoxication levels, craving, verbal recall and inflammatory markers.

Meanwhile, they also had lower levels of circulating cytokines—a marker of inflammation often associated with pain—in their blood.

Previous studies in animals suggest CBD and THC may work synergistically to fight inflammation and pain, while CBD may attenuate the cognitive impairment associated with THC.

Bidwell stresses that because the study was small, no conclusions can be made yet. However, the study is “foundational” in that, in a challenging research environment, it validates their unique method and paves the way for larger studies.

The research group has since gotten funding through a NIDA research grant for a van that serves as a mobile laboratory they can bring to subjects’ homes to test them after use.

“We cannot bring legal market cannabis into the lab for testing, but we can bring the lab to the people using it,” she said.

The team, which includes psychology and neuroscience professors Kent Hutchison and Angela Bryan, recently launched a crowdfunding campaign to expand their research. Four new studies are underway, including a state-funded study looking at use of high-potency products; a study looking at cannabis for anxiety and post-traumatic stress disorder; and a larger chronic pain study.

For that study, funded via a $3 million grant from the National Center for Complementary and Integrative Health (NCCIH), the researchers hope to recruit 300 subjects to use cannabis for low back pain and observe how different combinations of THC and CBD impact pain, inflammation, cognition, mood and other factors.

“Is there a combination of cannabinoids that is helpful for symptom reduction for conditions like PTSD or pain relief but safe and with low abuse potential? Does cannabis work better for some kinds of pain or some conditions than others?” Bidwell asks. “We hope to bring science to the table to help answer some of these important questions.

Seventy-eight years ago on Jan. 27, the Auschwitz concentration camp closed after liberation by the Soviet army. Professor Janet Jacobs, who researches genocide, trauma and collective memory, discusses the ways in which the experiences and trauma of Holocaust survivors are passed down through generations. END_OF_DOCUMENT_TOKEN_TO_BE_REPLACED

A model of your very own kidney made entirely from soft and pliable polymers? Researchers at two CU campuses are on the cusp of 3D printing realistic replicas of human anatomy. END_OF_DOCUMENT_TOKEN_TO_BE_REPLACED

Legalizing recreational cannabis does not increase substance use disorders or use of other illicit drugs in adults and may reduce alcohol-related problems, according to new research. The study also found no link between cannabis legalization and increases in cognitive, psychological, social, relationship or financial problems. END_OF_DOCUMENT_TOKEN_TO_BE_REPLACED
Return to the top of the page