Hitch a ride into space with BLOrk 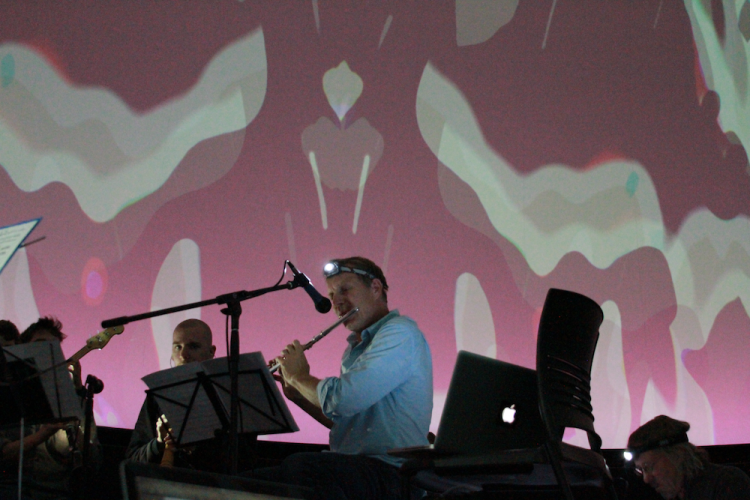 3 … 2 … 1 … Get ready for liftoff as the Boulder Laptop Orchestra—BLOrk for short—puts on a space-themed feast for the eyes and ears at CU Boulder’s Fiske Planetarium.

“It’s music inspired by the sights and sounds of space, including video and audio of NASA space launches from the point of view of the shuttle. Journey forth into great beyond with BLOrk as your guide!”

Thompson Jazz Studies Program Director John Gunther is a founding director of the College of Music’s electro-acoustic ensemble. He and his co-founder, Director of Music Technology John Drumheller, will join music majors and non-majors on stage for BLOrk’s April 20 concert, which features a variety of digital and traditional instruments performing songs by Sun Ra, David Bowie, Bjork, Radiohead and the Flaming Lips. Saxophones, drums and violin meld with sounds created online for this far-out take on space travel—and it’s all accompanied by Fiske’s Liquid Sky music visualization.

“The audience can fly around on the surface of planets, explore distant nebulae, then see colors and shapes are in synch with the music through Liquid Sky,” Gunther says.

BLOrk—founded 11 years ago as only the second laptop orchestra in the country—offers student and faculty performers a way to keep up with the latest in music technology. It’s a unique opportunity, Gunther says, to help usher in a new era of music.

“Things that would have been clumsy and expensive 10 years ago—such as integrating motion and light sensors—we’re able to do now simply by plugging in our laptops.”

That even includes trying out a new software called Music_SDP, which was created by a member of the College of Music family.

“Alum Hugh Lobel invented Music_SDP, which is an open-source, free software for music composition and performance that we’re using in this class,” Gunther says. “It’s one of the technologies we’re exploring now that didn’t even exist five years ago.”

Gunther says music technology is changing so fast that the name “BLOrk” itself may have to change as well.

“We’re using our phones and tablets—playing actual instruments with mobile devices,” he explains. “Eventually we may not even use our laptops anymore, so we might have to figure out how to replace the ‘L’ with something else!”

“Songs of Space” is Saturday, April 20, at 7 p.m., at Fiske Planetarium. For more information, including how to purchase tickets from Fiske, visit cupresents.org.

It was a busy fall for the American Music Research Center (AMRC)! One of the... END_OF_DOCUMENT_TOKEN_TO_BE_REPLACED

Friends, My heart is heavy. Associate Professor of Violin Charles (Chas) Wetherbee passed away on... END_OF_DOCUMENT_TOKEN_TO_BE_REPLACED

Longtime Associate Professor of Saxophone Tom Myer retired in May. As the year draws to a close, enjoy his insightful career reflections and advice … and discover what he’s up to now! END_OF_DOCUMENT_TOKEN_TO_BE_REPLACED
Return to the top of the page