The sound of innovation 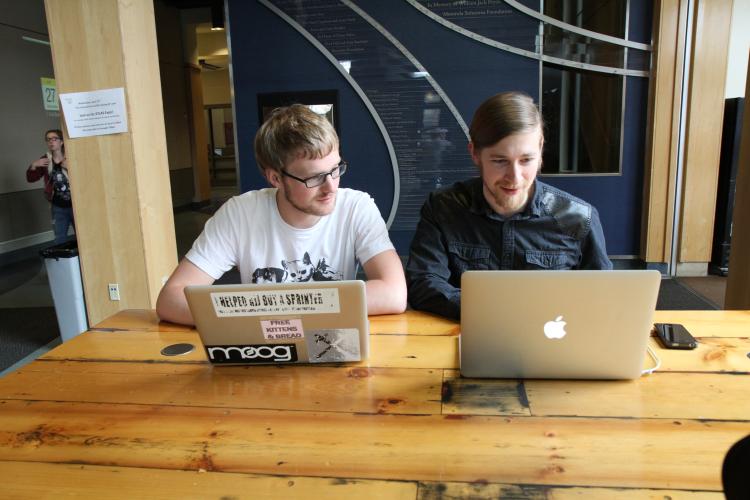 Michael Mann, a 2016 ecology and evolutionary biology graduate, and Hugh Lobel, a 2015 DMA graduate in composition, work on Music_SDP in the ATLAS Institute lobby.

As music and technology evolve, it only makes sense that they should evolve together, the principles of one informing and helping better the other.

This idea—that music making happens more efficiently with the help of technology—is behind the unique invention of one College of Music graduate.

“I’d been writing music using every instrument I could for years. But I started to realize that in order to really do what I wanted, I needed a new platform for my music.”

Hugh Lobel, who graduated in 2015 with a DMA in composition, is using the benefits of technological innovation to make it easier for anyone to compose his or her own music. His weapon in the fight is The Music and Sound Design Platform, or Music_SDP.

The trained programmer is building the platform from the ground up. He first got the coding bug at the University of Texas at Austin while earning his master’s degree in composition.

“At first I didn’t expect to take it very far. I didn’t think I needed programming to make the sounds I wanted to make. But I immediately found that I could never do this without programming.”

Using a coding language called Max, Lobel began developing his platform six years ago. At that time, most options for digital music creation were based on a digital audio workstation, or DAW, system.

“It allows people to record music into tracks and create compositions by combining different tracks in different orders,” he explains.

Over time, Lobel strayed from the DAW model, landing on his own concept as he pursued his doctoral degree in Boulder.

“A lot of artists were creating electronic music live. I started to think about how I could do that in Max.”

But to allow for live improvisation, Lobel knew he’d need to do a complete redesign of his product.

“It has lot of the same functions, like the ability to generate sound with synthesizers and record and manipulate audio, but the tools and functions are based on guitar pedal boards. They’re customizable based on the piece you’re writing.”

The pedals—called modules on Music_SDP—can be instruments, sound effects or recordings. Their adaptability allows for on-the-fly decisions in the middle of a performance.

The program can also be controlled by any number of different kinds of hardware. “You could use a keyboard, for example, to control the system,” Lobel explains. “You can set the modules so that the F key plays back a certain audio file or the E key plays a certain chord.”

Since a soft launch of the product last May as part of his dissertation, Lobel has continued to tweak the product, bringing what he’s learned as a teacher at the college and as a student of composition professors Michael Theodore and John Drumheller into the design.

“I’ve taught Max at CU, and of course every time you teach something you learn so much. That sparked an interest to continue making revisions.”

He’s also been getting help from other students. Chandler Spoon, who graduated this May with a bachelor’s degree in horn performance, and recent ecology and evolutionary biology grad Michael Mann, make up his team on campus.

“And BLOrk [student ensemble the Boulder Laptop Orchestra] has been using the software in its current and previous forms during performances, acting as bug testers for me.”

The ultimate goal of the project, Lobel says, is to make it a community-driven platform that’s free and easy for anyone to use.

“The most important thing is that the platform has value, and that happens when it’s at everyone’s disposal. You don’t need $10 to download it, and you don’t need to know anything about programming to use it.

“By making Music_SDP free, I hope to enable people who can’t invest in other tools to unlock their creativity and explore their potential.”

Lobel says he’ll keep the platform free by getting help where he can from other Max developers. “I already have way more ideas than I can execute myself. They know the language so well that they can introduce concepts and expand the functionality.”

Curiosity drives Lydia Wagenknecht, a PhD candidate in ethnomusicology and recent recipient of a Fulbright Research Award. “I care that my research will help us understand something in a more broad-based way that we didn’t understand before,” she says. END_OF_DOCUMENT_TOKEN_TO_BE_REPLACED

We’re so excited to welcome alumnus Damani Phillips back to campus this week and to present him the College of Music’s 2022 Distinguished Alumnus Award at our commencement ceremony on May 5! “The versatile training provided by CU has been the cornerstone of my success to date, and has enabled me to do and be many things well beyond typical expectations,” he says. Meet Phillips and discover his powerful advice to graduating Music Buffs. END_OF_DOCUMENT_TOKEN_TO_BE_REPLACED

On May 5, we look forward to welcoming back Judith Glyde, formerly professor of cello and chamber music at the College of Music and chair of our string faculty. Since retiring in 2014 to live in New York City, the professor emerita she has been active with the college’s alumni community there, offering tremendous support to Forever Buffs who are now living and working in the city. END_OF_DOCUMENT_TOKEN_TO_BE_REPLACED
Return to the top of the page