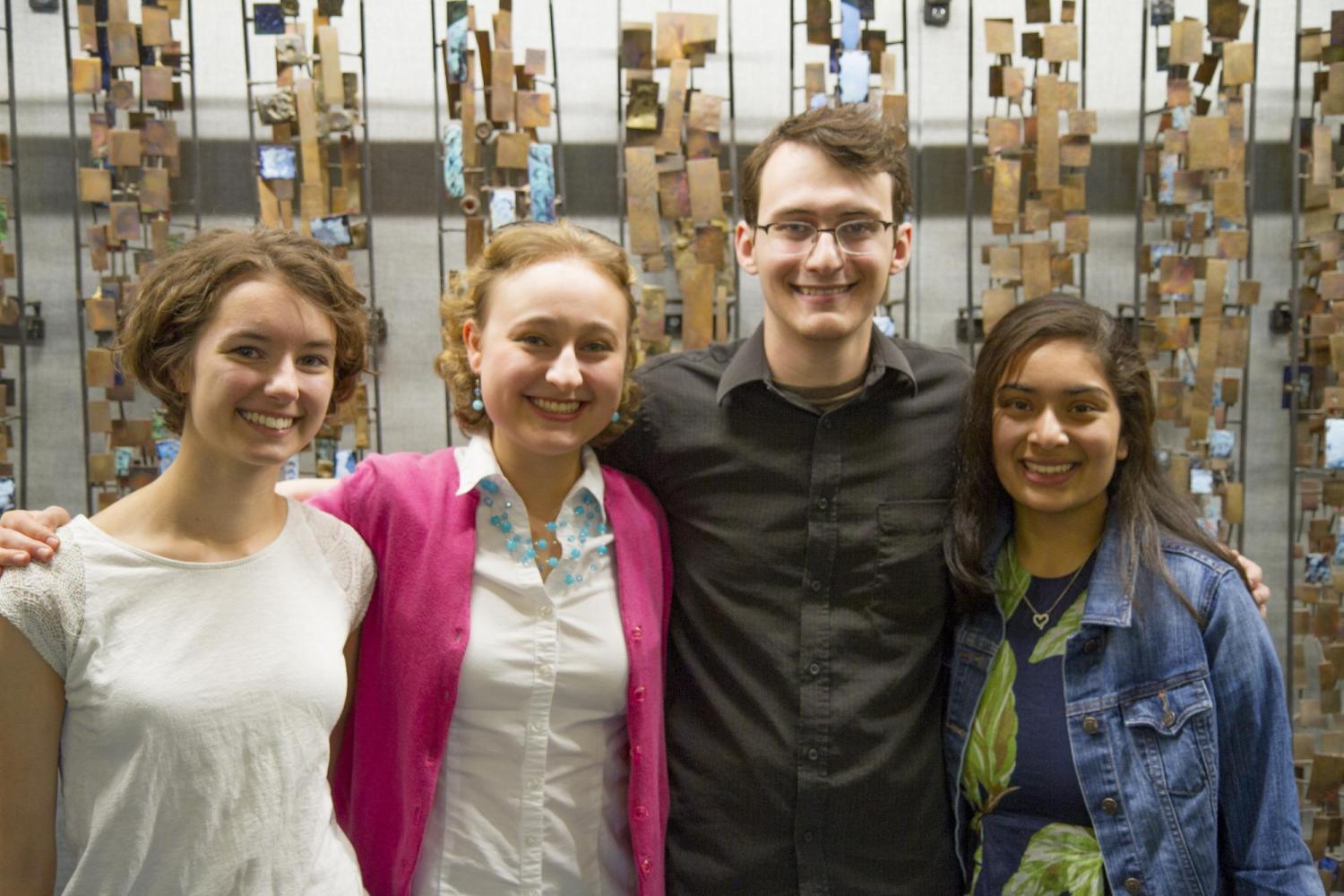 Claire Gunsbury, Sophia Zervas, David Leech and Anoushka Divekar are this year's outstanding students for the College of Music.

Coming to CU as an out-of-state student can be daunting, but that hasn’t stopped Claire Gunsbury from taking advantage of all the College of Music has to offer and winning the Outstanding Student award as a freshmen.

The first-year flute performance major from Minnesota has had a rewarding year at CU, collaborating with students and faculty outside of the flute studio. “I’ve worked with a piano major for her collaborative piano credit and got to play in her recital,” Gunsbury says. “I also performed recently with Max Mondzac in his junior guitar recital, which was a great experience.”

When she first heard that she had won the award, Gunsbury was ecstatic. “I was really happy and so honored! A lot of other freshmen are amazing musicians.”

This summer, Gunsbury plans to help out at the annual Panoramic Flutist program. She’ll also travel to Orlando for the National Flute Association Convention while taking lessons in the Twin Cities and taking part in a music festival in her hometown of Brainerd, Minnesota.

After her summer excursions, Gunsbury has an exciting year ahead of her.

“Max and I are going to be playing at [CU at] Carnegie Hall, so I’m super excited about that,” she says. “We’re working on figuring out the repertoire now.”

When the sophomore clarinet and instrumental music education major got an email last year regarding her winning the Outstanding Student award as a freshman, she was surprised.

“Last year I was so surprised to receive an email from the dean. I thought I was in trouble, or that it had gone to the wrong person! This year it was nice,” Divekar says. “It really made my day.”

The Iowa native has won the College of Music Outstanding Student award two years in a row now, proving her hard work and determination toward her studies.

The past two years, Divekar has taken advantage of the many performances on campus, both in the audience and on stage. “It’s been rewarding to watch other performers, as well as performing myself.”

When asked about her summer plans, Divekar chuckled.

“My mother signed me up for a 10K, but then I’ll be participating in the Eastern Music Festival in Greensboro, North Carolina,” says Divekar.

Divekar is already looking forward to next school year and the challenges ahead. “I want to get my butt kicked every day and get better at my instrument,” she says. “I want to become a better educator, and to be pushed.”

Juggling two majors within the College of Music is no walk in the park, but that doesn’t faze junior Sophia Zervas. Indeed, this winner of the Presser Scholarship is looking forward to a busy summer.

“I’ll first be attending SongFest at the Colburn School in Los Angeles for a three-week intensive vocal program, and then in July I’ll be going to Kiefersfelden, Germany, for a collaborative piano and opera program.”

This isn’t the Denver native's first time abroad, as she had the opportunity to travel with the College of Music’s six-week program in Florence, Italy, two years ago.

Zervas performed her junior piano recital this spring, and is preparing for her junior vocal recital this fall. “I’m looking forward to selecting new music for my piano program, as well as new chamber projects,” she says.

Winning an Outstanding Student award is rewarding for Zervas—a welcome acknowledgement of her achievements as a student and performer. “Receiving the email really made my Monday. It was a week before my recital, too, so it was a nice affirmation.”

She hopes to continue on a path of growth next year. “I’m grateful for my professors and the incredible opportunities they have given me. By playing in master classes, performing in three operas, and participating in the Anderson Competition, I’ve been able to see my growth as a performer,” says Zervas. "I want to thank everyone who has helped me grow as a musician and a person these last three years—my professors, family and peers. I would simply not be here without them."

With graduation only a short time from now, senior clarinet performance major David Leech has been reflecting on his past four years at CU.

“One of my fondest memories will always be the first day of classes,” Leech says. “Everything seems possible in those first stressful days of class, and it’s a very exciting time.”

Leech has been able to make the most of his four years, highlighting how easy it’s been to diversify his skills-set. From adding a business minor to exploring recordings and various classes, Leech is grateful for all the resources available to him.

“I’m going to miss being here very much, including the limitless performance opportunities over the past four years.”

Leech was honored to receive the Outstanding Student award, but not without being humbled in the process. “When I found out I was selected, I was kind of confused. Without my friends, family and mentors here, I’d be a disaster!” he says. “So it’s really a credit to my outstanding support system, without whom I’d be the furthest thing from outstanding.”

As of now, Leech’s post-grad plans are to move back to the Loveland area to do freelance work and sub with local orchestras. “I’m really looking forward to the challenge of not being in school and pushing myself as a musician,” he says.

Along with the award, Leech will have the honor of speaking at the College of Music’s commencement ceremony. “I’m hoping to touch on things the school would want the graduates to hear, what the graduates would want to hear, and things I want to say to them after sharing the past four years with them,” he says. “Nothing is going to get easier after this, more likely than not, but the last few years have been incredibly special.”

Curiosity drives Lydia Wagenknecht, a PhD candidate in ethnomusicology and recent recipient of a Fulbright Research Award. “I care that my research will help us understand something in a more broad-based way that we didn’t understand before,” she says. END_OF_DOCUMENT_TOKEN_TO_BE_REPLACED

We’re so excited to welcome alumnus Damani Phillips back to campus this week and to present him the College of Music’s 2022 Distinguished Alumnus Award at our commencement ceremony on May 5! “The versatile training provided by CU has been the cornerstone of my success to date, and has enabled me to do and be many things well beyond typical expectations,” he says. Meet Phillips and discover his powerful advice to graduating Music Buffs. END_OF_DOCUMENT_TOKEN_TO_BE_REPLACED

On May 5, we look forward to welcoming back Judith Glyde, formerly professor of cello and chamber music at the College of Music and chair of our string faculty. Since retiring in 2014 to live in New York City, the professor emerita she has been active with the college’s alumni community there, offering tremendous support to Forever Buffs who are now living and working in the city. END_OF_DOCUMENT_TOKEN_TO_BE_REPLACED
Return to the top of the page