Learning from the masters: The Takács Quartet

Since 1983, a force and a legendary name in chamber music has called Boulder home. And for more than 30 years, students, faculty, staff and the community at large have benefited from that presence.

The Takács Quartet and its original members—Gabor Takács-Nagy, Károly Schranz, Gabor Ormai and András Fejér—came to the College of Music as artists in residence eight years into their career together. Today, they’re known to the world as one of the great ensembles of our time.

But in Boulder, Schranz, Fejér and newer members Edward Dusinberre and Geraldine Walther are also known as patient and knowledgeable educators.

“They’re considered titans in the world of classical music, and we’ve looked up to them for a long time,” says Zachary Reaves, cellist of the Altius Quartet. Reaves and his colleagues—Joshua Ulrich, Andrew Giordano and Andrew Krimm—are the latest participants in the college’s Graduate String Quartet-In-Residence Program, which is coached primarily by the Takács.

He says the deep background the group brings to the college is inspiring. “They know the ins and outs of what we’re doing, both logistically and artistically.” 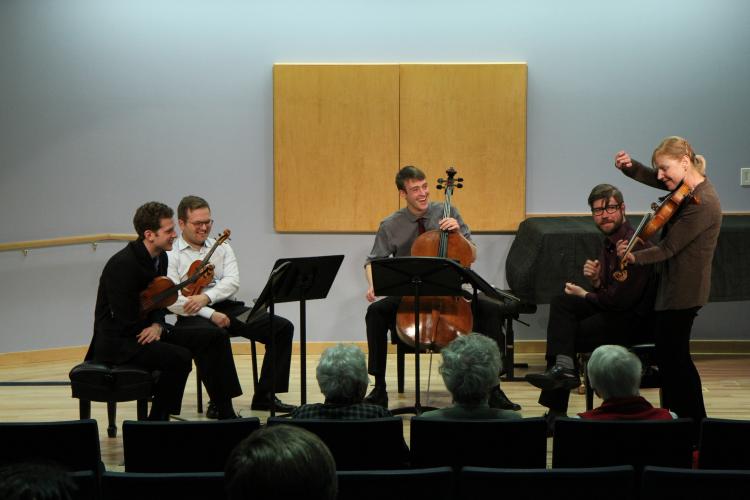 Geraldine Walther of the Takács Quartet works with members of the Altius Quartet at a master class.

Takács violist Geraldine Walther, a member of the quartet since 2005, says the relationship is mutually beneficial.

“We’re lifelong students,” she says. “When you teach, you gain a perspective on what you’re doing as a performer. I find it helps me be more objective about what I’m trying to do as a player.”

Along with Associate Professor of Viola Erika Eckert, the Takács has been instrumental in making the Quartet Program possible. The program hosts a graduate string quartet, providing performance and mentorship opportunities for a group that’s already nurturing a professional career.

“We take our roles as mentors very seriously,” says Edward Dusinberre, Takács Quartet violinist since 1993. “We remember being students, the ups and downs, and we want to show them that it’s all part of the process if something doesn’t go well. It’s all helping you build and grow as a musician.”

Altius violinist Andrew Giordano says the Takács has brought a balance of support and constructive criticism, which will make all the difference as he and his colleagues continue their journey in the professional chamber music world.

“It’s so competitive. It’s been so helpful to have mentors like the Takács Quartet, who really help us become the best musicians and the best quartet we can possibly be.”

“In this age, when you look at the current political situation especially, there’s such a lack of compassion and cooperation between people with different views,” he explains. “In a string quartet, you can’t survive like that. You have to work out your differences. You learn how to take criticism, how to give criticism.”

As for the future of the Quartet Program, Dusinberre says interest is growing. “We’ve been very happy with how the program’s been evolving. An obvious goal at this point would be to grow and perhaps host more than one quartet at a time.”

Walther says the professionalism of the Altius Quartet will contribute to that bright future.

“They’re very mature. And we are really enjoying that quality that they bring to the program.”

“They’ve contributed to the community here,” Dusinberre adds. “The Altius members play newer works, coach student groups and act as role models for the other students at the college.”

Reaves says the welcoming atmosphere at the College of Music has made that sort of immersion easy. “We have a lot of support from our colleagues, from the professors. We’re treated very much as equals, and that’s a wonderful feeling to have.”

That collaborative spirit is also part of what’s made the Takács’ career in Boulder so rewarding. “It’s really supportive and nurturing. There are so many great people here,” says Walther.

“We’re lucky to be here,” Dusinberre adds. “I think music can be a rather self-absorbed pursuit and we like the atmosphere of collaboration at the College of Music very much.”

In 2015, the Takács Quartet was nominated for its fifth Grammy for a CD of Shostakovich chamber music. It also premiered a piece by Timo Andres, which was co-commissioned by Carnegie Hall and Baltimore’s Shriver Hall.

A new member of the College of Music faculty shares his approach to preparing students to become universal musicians, and fostering an environment of diversity and inclusivity. “It's not about hyper-specialization, but about flexibility, creativity and keeping an open mind,” he says. END_OF_DOCUMENT_TOKEN_TO_BE_REPLACED
Return to the top of the page