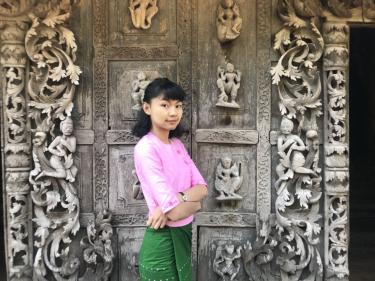 (BA General Linguistics, 2017 Queens College, The City University of New York). Chu is interested in the flow of semiotic culture--both a causation and a result of certain emotions--present in political narratives and discourses in Myanmar, formerly known as Burma. Her undergraduate and previous graduate trainings in sociocultural linguistics and linguistic anthropology complement her broader research interests in post-coloniality, modernity, affect, gender, law, and aesthetics in cultural anthropology and how they are being conceptualized, produced, and circulated in public and private discourses across urban spaces of Burma. Her research has been supported by the National Science Foundation Graduate Research Fellowship Program 2019. Her undergraduate thesis studies how the concepts of belonging and identity are problematized in the process of heritage language maintenance among transnational Sino-Burmese immigrant families in New York City and was supervised by linguistic anthropologist, Prof. Miki Makihara. Part of this thesis can be publicly accessible at https://docs.lib.purdue.edu/jsaaea/vol13/iss1/10. Chu currently works with Prof. Carla Jones in the Department of Anthropology at CU Boulder.

2022.  Witnessing is political: Picking off new shoots will not stop the spring. ArtsEquator.

2021.  Coping with the Coup while Poking Some Fun. In University of Colorado Boulder Center for Asian Studies Newsletter. March 1.

2016.  Are You a Myanmarian, Myanmarese, or Myanmarish? Or Just a Burmese? Newspaper Column (in Burmese). Myanmar Gazette. Issue. 93. P. A24. September. (editor-reviewed)