Coping with the Coup while Poking Some Fun

PDF version of the article.

February 1, 2021 (or 1221, as the day is now being called) marked a new era of political involvement in Myanmar. During the night, the Myanmar military (Tatmadaw) decided to disregard the November, 2019 election results, which had given the National League for Democracy, Aung San Suu Kyi’s party, a powerful majority. The Tatmadaw seized power while arresting her and many activists, and calling a national state of emergency.

Everyone I know in Myanmar, including my immediate family, is participating in the Civil Disobedience Movement (CDM). Civil service employees have refused to go to work as a peaceful way of showing their disagreement with the coup. Citizens in Yangon and other cities have marched and protested, and at 8pm each night, they call for the generals to step down by honking car horns and banging pots and pans. At the moment, the CDM has spread beyond the large cities across the country and has become the most salient formal resistance against the coup.

A palpable sense of worry, frustration, and anger looms over the public. On February 9, the police committed the first killing of a civilian; Ma Myat Thwe Thwe Khine, a young university student, was shot in the head and killed during a protest in Naypyidaw. In the following days, the military has murdered, tortured, and arrested more civilians. On February 11, my friends informed me about a newly drafted Cybersecurity bill that criminalizes “sexually explicit speech” (as in the current protest slogans against the coup) and using pseudonyms on Facebook among other violations of human rights and freedom of expression; the Tatmadaw now shuts down the Internet every night from 1 AM to 9 AM. On February 13, rumors began circulating about prisoners being released from jail to provoke civil unrest in Yangon and increase fear. In the days that followed, there were suspicious arson attacks in Yangon.

In contrast to the formal resistance staged by the CDM, an informal mode of resistance that plays with puns, images, and memes has also emerged as a public strategy for poking fun at figures of authority like the Tatmadaw, if not authoritarianism itself.

Consider the popular protest slogan “ပုကျွန်မခံပြီ.” This slogan builds on an anti-colonial slogan used against the British in the 1940s, “သူ့ကျွန်မခံပြီ,” which meant “I won’t let myself be their slave.” Revived now for 1221, the new phrase means, “I won’t let myself be the short one’s slave!” The words သူ့ (their) and ပု (short) rhyme, making it easy to replace one word with the other in the slogan. The slogan is funny because it equates the army commander-in-chief Min Aung Hlaing with a colonial oppressor, while also insulting him for being short. 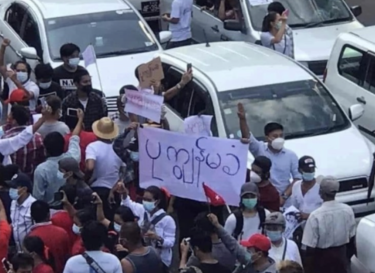 A group of protesters in Sule Pagoda in Yangon holding a slogan, “I won’t let myself be the short one’s slave!”

One of the memes poked fun at the fact that the Tatmadaw generals are older and therefore might not understand how VPNs work when they banned Facebook and Instagram. Aba is a usual addressee term for “uncle” or an older man, colloquially used to refer to the highly-ranked military generals in Myanmar. As this image suggests, young urban Burmese have been finding ways to laugh at this lack of technological savvy while channeling images of other older powerful men. 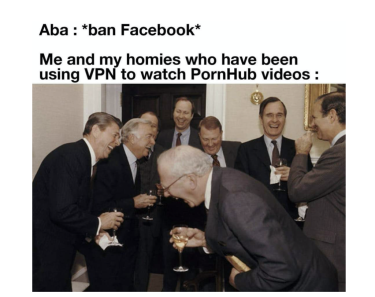 This feature of humor and satire in current protests has been described by media outlets as a distinct trademark of Generation Z protesters in Myanmar, which distinguishes them from previous generations of activists of the 8888 uprisings of August 8, 1988 and the 2007 Saffron revolution.

The emphasis on generational difference in political engagement is also a meta-message characteristic of movements from the US to Asia. There is no doubt that the political participation of the current generation of protesters in Myanmar and other countries is creative.

However, as I have argued elsewhere, the use of satire as political commentary is not merely a generational characteristic in Myanmar. Satire has long been used as a tactic for evading persecution (although not always), while tickling the senses of those who see it, hear it, or read it. Today, mocking the Tatmadaw is a pleasurable way of at least fleetingly inverting the power of those who claim to possess it. 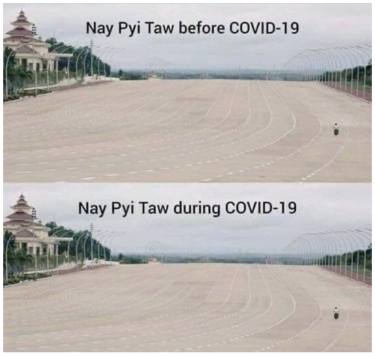 A meme, circulating on social media during the pandemic, mocks the unpopularity of Myanmar’s capital, Naypyidaw.

While previous styles of satire commented on the (im)morality of a particular public figure (including Aung San Suu Kyi), more recent satirical messages ridicule both the military’s morality (specifically the commander-in-chief Min Aung Hlaing) and broader social and cultural issues in Myanmar society.

One slogan that particularly jeers at chauvinist Bama expectations around female body politics exposes the longstanding Bama patriarchy, found parallel in the national crisis like the Tatmadaw and in personal life like menstruation. Signs like these present the current crisis in Myanmar as both a political and an intimate problem. 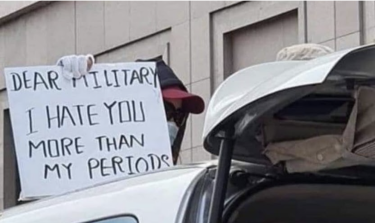 A protestor in Yangon holding a slogan, “Dear Military I hate you more than my periods.”

Sexual humor is not appealing to everyone, nor is dark humor. Some have argued that this style of poking fun could potentially downplay the severity of the struggle against the Tatmadaw by making it seem amusing rather than serious. An activist friend of mine based in Yangon expressed this concern to me, as she worries that protesters will treat activism as just a trendy thing to do at this moment. Still, we both laughed at the Tatmadaw's absurd attempt to cover up the news of a suspicious flight from China to Myanmar on February 10. While the generals claimed the flight only carried seafood into the country, other evidence suggested it brought arms to equip the military. 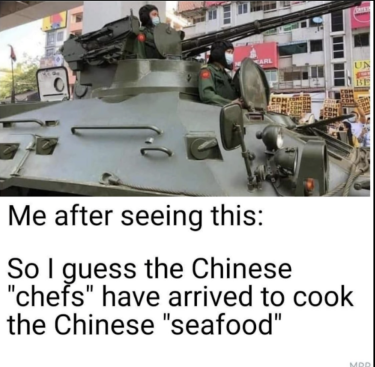 A meme mocking the Tatmadaw deployment of war tanks in the streets of Yangon after their attempt to cover up news of a Chinese flight that was rumored to carry weapons that could be used against protesters.

Dismantling what ails contemporary Myanmar will take time. We face not only the Tatmadaw but also burmanization and foreign imperialism in the aftermath of British colonialism in the country. Since independence in 1948, burmanization has taken place in forms of educational policies and armed conflicts with non-Bama states. In some cases like the Rohingya crisis, these conflicts exceed beyond the intention of burmanization, where the Rohingya people are depicted as “illegal immigrants from Bangladesh,” therefore ineligible even for the processes of burmanization.

With regard to foregin imperialism, local and indigenous scholars have demanded a reexamination of the status of Myanmar as a post-colonial nation, and the neocolonial and imperial presence of more powerful countries (like the US and China) in the contexts of contemporary Myanmar political economy and of knowledge production about Myanmar. As Burmese historian Tharaphi Than puts it, “Academic colonialism is thinking every coup around the world [as] their intellectual workout. Coups are their case studies. They see coup power challenging their brain power. They can’t see people.” While some protesters demand that the US and other foregin nations “save Myanmar” with military intervention and sanctions, some of us are also critical of potential western imperialism in the aftermath of such interventions.

Those of us who have ties to Myanmar know that 1221 is a turning point. What we do not yet know is what life will be like in the coming days, weeks, or even years. Rather than wait to learn what the future holds, we are acting. And humor can be the powerful strategy of resistance against any figure of authority. No matter how ပလပ်လွတ် (Burmese slang used to refer to “an unhinged and deranged person”) we might present ourselves, laughter for sure helps us cope with the daily news of despair, stress, anger, and hopelessness.

Born and raised in Yangon, Myanmar, Chu May Paing is a PhD student in cultural anthropology at University of Colorado Boulder. Her research interests include gender, political aesthetics, post-coloniality, and modernity in urban Myanmar.