Serene is a Boettcher Scholar who is double majoring in political science and journalism with a minor in leadership studies. In her art, Serene enjoys using unorthodox tools and mixtures to really tap into her creativity. A Colorado native, Serene captures the remarkable beauty of her state as well as her own personal experiences. Her deep interest in justice, respect and acceptance of Sikhs and women is evident from her artwork.

Serene’s zeal for social justice and The Bill of Rights — particularly the First Amendment as it relates to religious freedom — inspired her honors thesis, where she studies the pathology behind discrimination with a focus on attacks against Sikh Americans.

Serene believes art is a means through which communities can challenge stereotypes and prejudices. Compelled to give back to her community after interning for the U.S. Senate during a time when suicide rates increased in at-risk women populations, Serene founded The Serenity Project. She used this nonprofit as means to empower these women with skills to persevere through and fight against discrimination, domestic abuse and body dysmorphia. As the former Miss Colorado Teen, Serene hopes to redefine our society’s concept of “beauty” through promoting ideals like bravery and perseverance.

In 2018, Serene became the first female from CU Boulder to win the coveted Rhodes Scholarship. Read more about her in CU Boulder Today and in 303 Magazine. 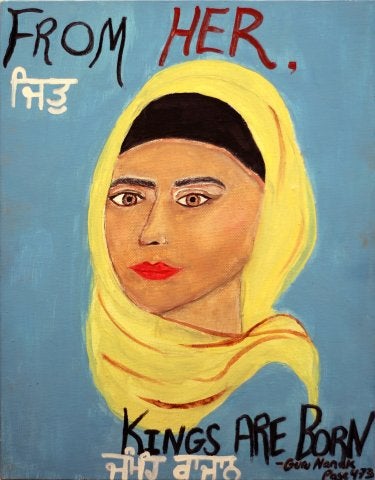 The Kaur Values of Freedom, Justice and Beauty – “In this piece, two fundamental notions of empowerment are addressed: religious bravery and womanhood. Firstly, the woman in this painting is a member of the Sikh faith. She demonstrates courage by proudly displaying her faith (and her Buff pride using yellow and black) despite knowing that every day she leaves her house, she may not return. She redefines the turban by establishing a friendly face that isn’t one people associate with terrorism. Through her bright yellow scarf, she presents a sense of optimism and energy. Secondly, this woman reimagines womanhood by being a woman who does not subscribe to our traditional view of ‘beauty.’ Beauty is more than looks. It is the ability for someone to pave the way of love for others to follow for many years onwards. The quote on the painting is from page 473 of the Sikh’s Guru Granth Sahib written more than 500 years ago. The hymn demonstrates that women ought to be cherished, valued and treated like the Queens they are in a society that so often down plays and neglects the value that women hold. This woman is who I hope to be in the future – an empowered, proud and revolutionary Sikh woman.”
Student Arts Program official selection 2018

Learn more about Serene at SereneSingh.com
By clicking the preceding link, you are leaving colorado.edu. We are not responsible for the content of any linked site or any link contained in a linked site.