Where no spacecraft has gone before: A close encounter with binary asteroids

Where no spacecraft has gone before: A close encounter with binary asteroids

These bodies are pairs of asteroids that orbit around each other in space, much like the Earth and moon. In a project review on Sept. 3, NASA gave the official go-ahead to the Janus mission, named after the two-faced Roman god. The mission will study these asteroid couplets in never-before-seen detail.

Asteroids by the numbers

It will be a moment for twos: In 2022, the Janus team will launch two identical spacecraft that will travel millions of miles to individually fly close to two pair of binary asteroids. Their observations could open up a new window into how these diverse bodies evolve and even burst apart over time, said Daniel Scheeres, the principal investigator for Janus.

“Binary asteroids are one class of objects for which we don’t have high-resolution scientific data,” said Scheeres, distinguished professor in the Ann and H.J. Smead Department of Aerospace Engineering Sciences at CU Boulder. “Everything we have on them is based on ground observations, which don’t give you as much detail as being up close.”

The mission, which will cost less than $55 million under NASA’s SIMPLEx program, may also help to usher in a new era of space exploration, said Lockheed Martin’s Josh Wood. He explained that Janus’ twin spacecraft are designed to be small and nimble, each one about the size of a carry-on suitcase.

“We see an advantage to be able to shrink our spacecraft,” said Wood, project manager for the mission. “With technology advancements, we can now explore our solar system and address important science questions with smaller spacecraft.”

Janus is led by the University of Colorado Boulder, where Scheeres is based, which will also undertake the scientific analysis of images and data for the mission. Lockheed Martin will manage, build and operate the spacecraft.

For Lockheed Martin and Scheeres, the Janus mission is the latest step in a long history of getting up close to asteroids. They’ve both played major roles, for example, in NASA’s OSIRIS-REx mission, which is currently in orbit around the asteroid Bennu. Lockheed Martin built and supports operations of the spacecraft, while Scheeres leads the mission’s radio science team.

“This partnership embodies two of the university’s greatest assets in aerospace,” said Vice Chancellor for Research and Innovation Terri Fiez. “Combining the top-notch research and student researchers in aerospace at CU Boulder with the capabilities of industry partners like Lockheed Martin enables us to accelerate transformational discoveries out into the market for real-world impact.”

But binary asteroids, which represent about 15% of the solar system’s asteroids, add a new level of complexity to the story of rocky debris in space.

“We think that binary asteroids form when you have a single asteroid that gets spun up so fast that the whole thing splits in two and goes through this crazy dance,” Scheeres said.

The mission will rendezvous with two binary pairs—named 1996 FG3 and 1991 VH—each showcasing a different kind of crazy dance. The pair called 1991 VH, for example, is the wildcard of the two with a “moon” that whips around a much bigger primary asteroid following a hard-to-predict pattern.

The team will use a suite of cameras to track these dynamics in unprecedented detail. Among other goals, Scheeres and his colleagues hope to learn more about how binary asteroids move—both around each other and through space. 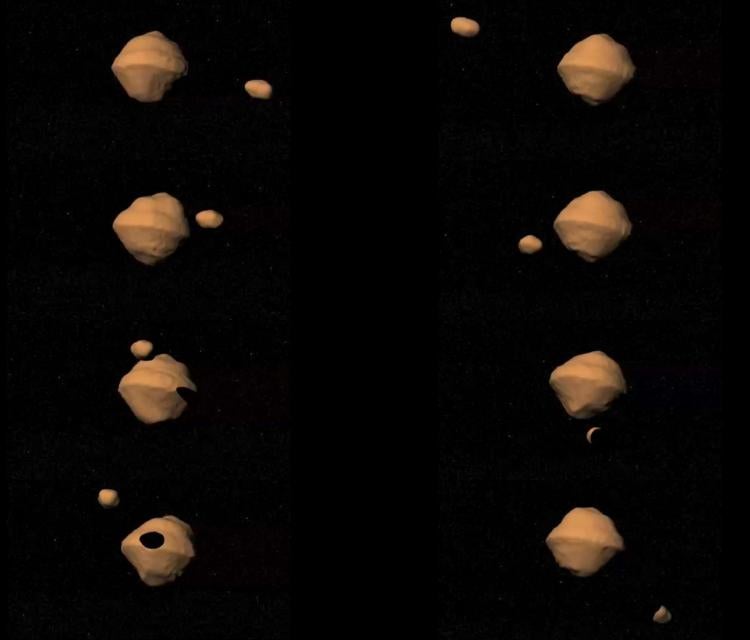 Rendering of the orbital pattern of the binary asteroid 1999 KW4. (Credit: NASA/JPL)

“Once we see them up close, there will be a lot of questions we can answer, but these will raise new questions as well,” he said. “We think Janus will motivate additional missions to binary asteroids.”

The entire mission, Wood added, is being designed to be as flexible and hardy as possible.

Wood explained that over the last decade, spacecraft have become smaller as scientists have turned to pint-sized spacecraft called CubeSats and SmallSats to collect data. Such missions cut down on costs and preparation time by using more affordable off-the-shelf parts.

Janus’ twin spacecraft, however, will venture farther than any of these miniature missions to date. After blasting off in 2022, they’ll first complete an orbit around the sun, before heading back toward Earth and sling-shotting their way far into space and beyond the orbit of Mars. It’s a long way to go for machines that weigh only about 80 pounds each.

“I think it’s a great test for what is achievable from the aerospace community,” Wood said. “And the Colorado-centric development for this mission, combining the space talent of both CU Boulder and Lockheed Martin, is a testament to the skills available in the state.”

And, Wood added, the team is ready to get started in earnest on the mission: There’s a lot to do before the spacecraft launch in just two years.

“We see this evolution to smaller and more capable spacecraft being a key market in the future for scientific missions,” Wood said. “Now, we want to execute and show that we can do it.” 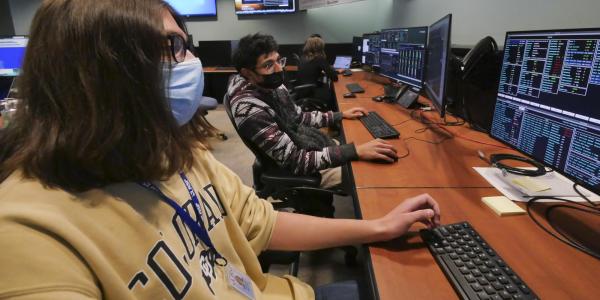 In December, students and professionals sat in a mission operations center on campus to watch NASA's new Imaging X-Ray Polarimetry Explorer satellite blast off into space. But for the dedicated individuals managing the mission operations, the hard work had just begun. END_OF_DOCUMENT_TOKEN_TO_BE_REPLACED 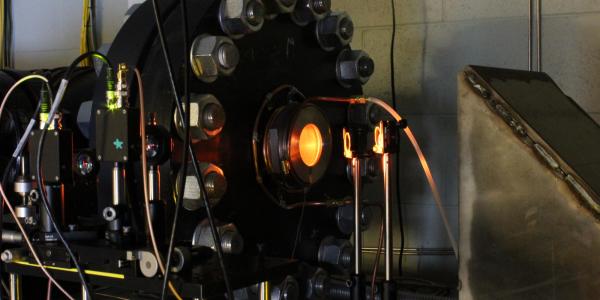 Professor Greg Rieker and Ryan Cole have developed an experiment that recreates the climates of planets beyond our solar system right in the lab. By reaching the same high-temperature and high-pressure conditions found on many exoplanets, the instrument can map their atmospheres, which could help humanity detect life outside our solar system. END_OF_DOCUMENT_TOKEN_TO_BE_REPLACED

The decades-in-the-making James Webb Space Telescope will observe light from the dawn of the universe and may even detect the gases swirling in the atmospheres of alien planets. END_OF_DOCUMENT_TOKEN_TO_BE_REPLACED
Return to the top of the page