Toddlers whose moms were exposed to higher levels of air pollution during mid- to late-pregnancy tend to score lower on measures of cognition, motor coordination and language skills, according to new CU Boulder research.

Published today in the journal Environmental Health, the study of Latino mother-child pairs is among the first to assess the link between prenatal pollution exposure and brain development in infancy. It adds to a growing body of evidence suggesting that exposure to dirty air during critical windows of development can have potentially lasting impacts on children's health.

For the study, the research team followed 161 healthy mother-infant pairs residing in Southern California and enrolled in the Mother’s Milk Study, a longitudinal study of infant health. Participants provided detailed histories of where they had lived. Researchers then used the U.S. Environmental Protection Agency’s Air Quality System, which records data from ambient monitoring stations around the country, to calculate the mothers’ exposure to pollutants from roadside traffic, industry, wildfire smoke and other sources during pregnancy.

When the children reached age 2, they underwent a series of neurodevelopmental tests, assessing cognitive, motor and language skills.

After taking into consideration socioeconomic status, number of times the baby was breastfed per day, whether the infant was early, late or on time, the mother’s weight, the baby’s birthweight and other factors that could influence results, the study found that 2-year-olds exposed prenatally to more inhalable particulate matter (PM 10 and PM 2.5) scored significantly lower on cognitive tests. For instance,  those exposed to PM10 levels at the 75th percentile compared to the 25th percentile scored about 3 points lower.

When the exposure occurred mattered, according to the study, with exposures in mid- to late-pregnancy proving particularly detrimental to neurodevelopment, said first author Zach Morgan, who graduated in May with a master’s degree in integrative physiology. 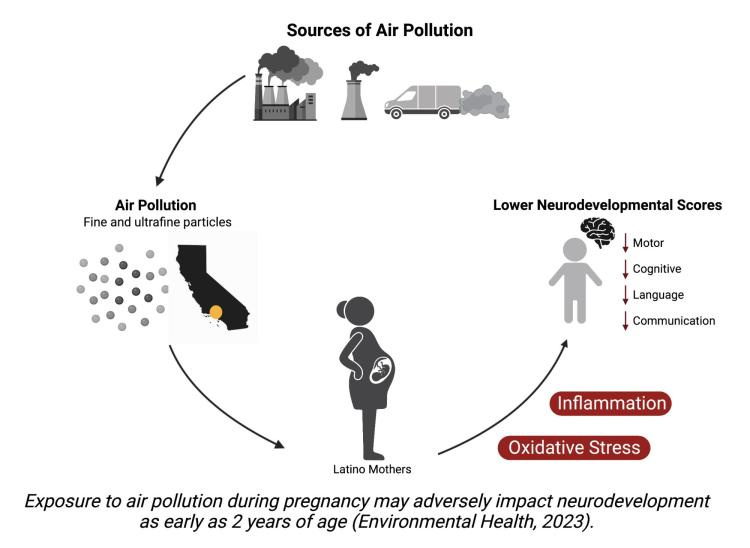 “The brain develops differently at different stages of pregnancy, and when you have a disruption at a critical window, that can affect the trajectory of that development,” he said.

He explained that during mid- to late-pregnancy, key circuits within the brain form to support sensory, communication and motor systems.

While more research is needed to understand just how pollution impacts the developing brain, previous research suggests inhaled pollutants may come into direct contact with the fetus, causing systemic inflammation and oxidative stress that can interfere with neurodevelopment.

Alderete’s own research has also shown that exposure to air pollution can impact a baby’s gut microbiome in ways that promote inflammation, which could also impact the brain.

Other studies in older children have found associations between prenatal exposure to pollutants and reductions in white matter, cortex thickness and blood flow in the brain as well as lower IQ scores.

The study was restricted to Latino infants, so it is not yet clear whether the results hold for the general population.

Alderete noted that 90% of the world’s population is exposed to particulate matter levels exceeding recommended levels, and the burden of exposure is often higher among racial and ethnic minorities and low-income populations. (One EPA study found that racial minorities are exposed to as much as 1.5 times more airborne pollutants than white counterparts.) Additionally, other research by Alderete has shown that Latinos in Southern California tend to live in adverse environmental conditions, including those that have been linked with poor neurodevelopmental outcomes.

“Our findings highlight the importance of addressing the impact of pollution on disadvantaged communities and point to additional steps all families can take to protect their health,” said Alderete.

She cautioned that just because a woman was exposed to high levels of pollution while pregnant does not mean that her child will have lasting cognitive deficits.

But she does recommend that pregnant women be vigilant in avoiding airborne pollutants when possible, particularly in the second and third trimester. They should also avoid exercising outdoors on high pollution days; invest in an air filtration system inside the home; open the windows while cooking; and steer clear of secondhand smoke.

“This is just one of the many things parents-to-be should be aware of to give their child the best start possible,” she said.

Seventy-eight years ago on Jan. 27, the Auschwitz concentration camp closed after liberation by the Soviet army. Professor Janet Jacobs, who researches genocide, trauma and collective memory, discusses the ways in which the experiences and trauma of Holocaust survivors are passed down through generations. END_OF_DOCUMENT_TOKEN_TO_BE_REPLACED

A model of your very own kidney made entirely from soft and pliable polymers? Researchers at two CU campuses are on the cusp of 3D printing realistic replicas of human anatomy. END_OF_DOCUMENT_TOKEN_TO_BE_REPLACED

Legalizing recreational cannabis does not increase substance use disorders or use of other illicit drugs in adults and may reduce alcohol-related problems, according to new research. The study also found no link between cannabis legalization and increases in cognitive, psychological, social, relationship or financial problems. END_OF_DOCUMENT_TOKEN_TO_BE_REPLACED
Return to the top of the page