An international team led by CU Boulder researchers has cracked the chemical code driving the formation of iodine particles in the atmosphere, revealing how the element contributes to increased cloud cover and depletes molecules in the Earth’s protective ozone layer.

The research, conducted at the world’s largest particle physics laboratory, the European Organization for Nuclear Research (CERN), was published today in the journal Nature Chemistry. It’s the first time that any experiment in the world has demonstrated the mechanism for how the gas-phase form of iodine—known as iodic acid—forms, and suggests it has a catalytic role in atmospheric particle formation.

It comes at a time when atmospheric iodine is increasing globally, with current levels triple what they were 70 years ago. Researchers hope that this new knowledge on iodine’s atmospheric interactions can be added to global atmospheric and climate models to help scientists better understand its environmental impacts—such as increased cloud cover, which could exacerbate global warming-related thinning of Arctic sea ice. 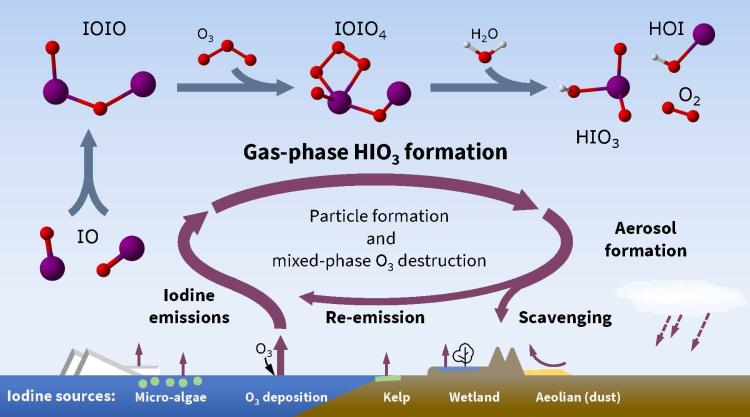 Iodine is a common and highly reactive element, which can increase cloud cover and destroy ozone as a result of its chemical interactions. Scientists now understand how iodic acid (HIO3) forms in the atmosphere. (Credit: Henning Finkenzeller)

“This paper establishes a link between the sources of iodine, how they are emitted into the atmosphere, and particle formation, which through subsequent growth, seeds clouds,” said Rainer Volkamer, co-lead author on the paper, professor of chemistry at CU Boulder and fellow at the Cooperative Institute for Research in Environmental Sciences (CIRES). “That link didn't exist before, and now we have established that link at the molecular level."

This link between iodine sources and atmospheric particle formation is a multi-step process. First iodine oxide radicals bond with themselves, then react with ozone and water to make iodic acid, with (singlet) oxygen and hypoiodous acid as co-products.

Iodine is a common and highly reactive element that forms radical species which undergo rapid chemical reactions lasting seconds to minutes in the atmosphere. Most iodine found in the atmosphere comes from the ocean—where it exists as iodide, also present in table salt. Its three-fold increase in the atmosphere over the past 70 years is linked to an increase in anthropogenic air pollution: as harmful, ground-level ozone reacts with the ocean-based iodide, it releases volatile iodine gasses to the atmosphere.

While iodine has been studied for 150 years, it is only in the past two decades that researchers such as Volkamer have revealed its important role within the atmosphere. In 2020, Volkamer and CU Boulder and CIRES researchers published research showing how iodine reaches the stratosphere and eats away at the ozone that protects the planet from harmful UV radiation.

“Iodine is the new kid on the block, among other halogens, that play into the recovery of the ozone layer,” said Volkamer. 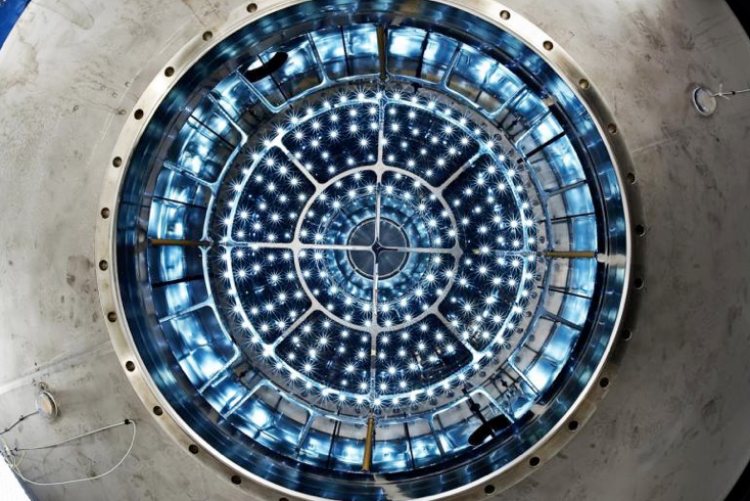 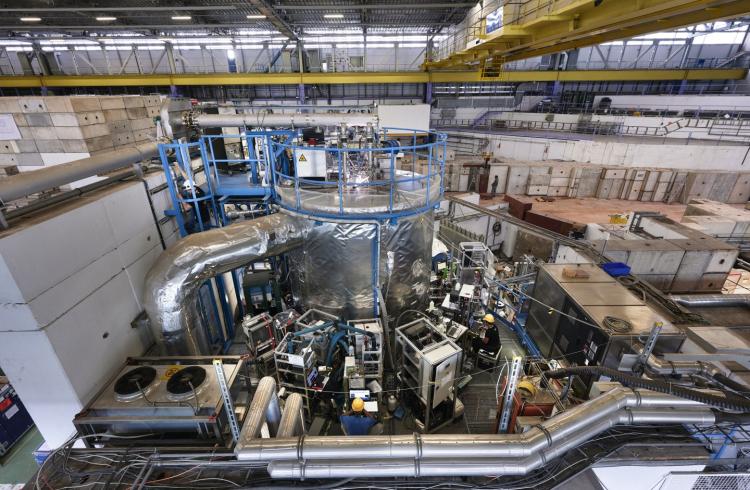 The Cosmics Leaving Outdoor Droplets (CLOUD) experiment at CERN, Geneva uses an ultraclean chamber facility to study how gases form new particles (nucleation), and grow to affect cloud formation. The primary goal of CLOUD is to understand the influence of galactic cosmic rays (GCRs) on aerosols and clouds, and their implications for climate. (Credit: CERN)

To study this missing link, the research team turned to CERN, home to the pristine conditions required to observe and collect data on these particles. Here, an experiment known as CLOUD (Cosmics Leaving Outdoor Droplets) has become the world’s leading laboratory experiment to study the remaining poorly understood aspects of aerosol and cloud formation.

Volkamer’s research group, the Atmospheric Trace Molecule Spectroscopy (ATMOSpec) Lab, is one of only three universities in the U.S. (along with Caltech and Carnegie Mellon University) who are part of this collaboration, along with 16 European partners.

“This is the only such experiment that exists in the world,” said Volkamer. “It's an honor to be part of the collaboration and to be leading it in the context of a study like this one.”

In the CLOUD chamber at CERN, the researchers had access to a laboratory environment with perfect control over conditions like temperature, pressure, humidity, ozone concentration, and iodine concentration, as well as access to different light sources resembling different aspects of the solar spectrum.

By setting up this artificial, indoor atmosphere where certain reactions may or may not happen, the scientists could accurately gather data on iodine chemical reactions that form and grow particles.

“This is a great example of experiments and computations coming together to answer a question that neither of them could have answered on their own,” said Theo Kurten, co-lead author on the study and professor of chemistry at the University of Helsinki.

To determine whether what they observed in the laboratory translated to the real world, they also tested their findings in the air surrounding the Maïdo observatory on Réunion Island in the southern Indian Ocean—a remote location free of much of the influence of human activity—and were able to corroborate their laboratory results.

A catalytic role on climate

Unlike other elements such as sulfur (or sulfuric acid), iodine doesn’t need the help of other molecules (known as “bases”) to form atmospheric particles. It’s also quite efficient at this process, compared to other elements, the researchers found.

Therefore, the formation of particles from iodic acid is not limited to coastal iodine hot spots, or locations where these chemical bases are available, but rather can occur throughout the atmosphere.

“It’s a global phenomenon, and the global significance of iodine in particle formation may be bigger than currently thought,” said Henning Finkenzeller, first author on the study, a part of his dissertation at CU Boulder.

Iodine is also fundamentally different from other particle-forming vapors, said Finkenzeller, because of its ability to kick-start the formation of atmospheric particles, and the fact that one iodine atom can kick-start this process multiple times. This catalytic role in particle formation enhances its effects in the atmosphere wherever it goes, whether that role is eliminating protective ozone molecules or increasing cloud cover.

As human activity increases the availability of iodine in the atmosphere, due to our negative impacts on air quality around the world, this short-lived element’s impacts may be long-lasting. As sea ice melts in the Arctic, more iodine can enter the atmosphere, increase cloud cover and enhance warming effects on the region. And in the tropics, storms can send this iodine high into the atmosphere, where it impacts our protective ozone layer.

“We still need to better understand iodine recycling chemistry. But now that we understand the source mechanism, we are one step closer to understanding how excess iodine impacts particle formation, clouds and ozone recovery in our planet's atmosphere,” said Volkamer.

Scientists from three countries report that materials inspired by nature could one day help engineers design new kinds of solar panels, robots and even coatings for ultra-fast jets. END_OF_DOCUMENT_TOKEN_TO_BE_REPLACED 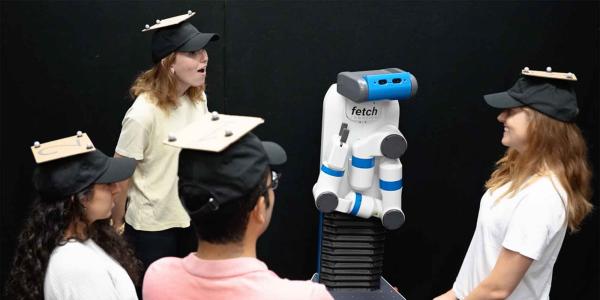 Robots help build cars, fly planes, fight wars and provide health care; they play a role in countless industries, but for the most part, they don't work in chemistry labs. A team of CU Boulder scientists plans to change that. END_OF_DOCUMENT_TOKEN_TO_BE_REPLACED
Return to the top of the page