This week, an international group of 10 scientists is calling for protective limits on fishing in Antarctica’s Southern Ocean, reporting in the journal Science that current levels of fishing, combined with climate change, are taking a concerning toll on a diverse ecosystem of global importance.

“We cannot ignore the increasing evidence of the ecosystem impacts of fishing in its current form and the dire threat posed by climate change,” said Cassandra Brooks, lead author of the commentary and assistant professor of environmental studies at CU Boulder. “Given the immense global value of the Southern Ocean, we must urgently implement tools toward more sophisticated spatial management and consider the full suite of values, and trade-offs, in continuing fishing in its current form.”

The vast Southern Ocean surrounding Antarctica comprises about 10% of the world’s oceans and plays a major role in global climate regulation and carbon storage. As one of the healthiest marine ecosystems left in the world, it is home to a diverse marine ecosystem of fishes, whales, seals, birds, invertebrates and microorganisms, many of which depend on its resources during seasonal migrations.

Commercial fishing for Antarctic toothfish, sold to high-end restaurants as Chilean Sea Bass, and krill, used as fishmeal and fish oil supplements, threatens the food chain in the Southern Ocean from both the top and the bottom, respectively. The authors argue that allowing fishing of these and other marine animals to continue in its present form jeopardizes this ecosystem and is increasingly unsustainable, with benefits realized by only a few wealthy nations and contributing little to global food security. 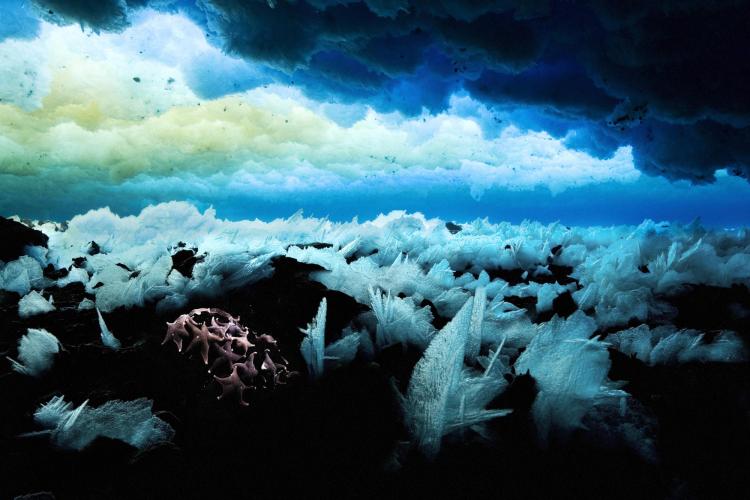 The Southern Ocean remains one of the healthiest marine ecosystems in the world. (Credit: John Weller)

The Commission for the Conservation of Antarctic Marine Living Resources (CCAMLR) is the arm of the Antarctic Treaty System responsible for managing the marine resources of the Southern Ocean, with a mandate to ensure fishing does not cause harm to the region. CCAMLR is responsible for the adoption of the Ross Sea region Marine Protected Area (MPA), the world's largest MPA (600,000 square miles) and a portion of the Southern Ocean which is now protected from commercial fishing through 2052.

“This is a critical moment for CCAMLR,” said Brooks. “They showed tremendous leadership in 2016 by adopting the Ross Sea region MPA and they can lead again now.”

The piece also publishes during the United Nations Decade of Ocean Science for Sustainable Development, which supports scientific observations and research on oceans’ responses to environmental and anthropogenic pressures as the basis for sustainable development decisions.

With a precautionary interim distribution of the catch limit on krill set to expire after 2022, the Southern Ocean’s most abundant and important animal is especially at risk. The authors emphasize that short-term gains from fishing should not be allowed to be exploited. Instead, the region’s resources, beauty and benefits should be preserved for both present and future generations—something climate change already threatens.

“Amid the ongoing climate crisis and given the growing evidence that fishing in its current form is jeopardizing the Southern Ocean ecosystems, CCAMLR has the incredible responsibility to take conservation action now,” said Brooks.

Mitigating climate change by significantly reducing carbon emissions this decade will require big transitions in all sectors, from energy and transportation to construction and industry. But significant reductions in global emissions are possible, experts say. END_OF_DOCUMENT_TOKEN_TO_BE_REPLACED

Clint Carroll, associate professor in the Department of Ethnic Studies, studies Cherokee access to gathering wild plants and land use management, and tends to the land in his own backyard. END_OF_DOCUMENT_TOKEN_TO_BE_REPLACED

With the planet already warming, technical fixes to addressing a changing climate are important, experts say, but they can only get us so far. We need social fixes, too. END_OF_DOCUMENT_TOKEN_TO_BE_REPLACED
Return to the top of the page