Banner image: Artist's depiction of the DART spacecraft about to slam into the asteroid Dimorphos. (Credit: NASA/Johns Hopkins APL)

Editor's note: The DART spacecraft successfully collided with its target asteroid on Sept. 26. Researchers will now gather data on the asteroid system to determine how its motion will shift.

The spacecraft is aiming for a pair of asteroids orbiting around each other millions of miles from Earth: Didymos, which measures about a half-mile across, and its smaller companion Dimorphos. DART will slam into the surface of Dimorphos at more than 14,000 miles per hour, fast enough to permanently alter its orbit around Didymos. It’s all part of an attempt by NASA to determine if such impacts can shift the movement of rocky asteroids in space, potentially protecting Earth if it becomes necessary in the future.

As Jay McMahon put it: “We’re going to bump it and see how that changes things.”

McMahon is an associate professor of aerospace engineering sciences at CU Boulder and a participating scientist on the DART mission. His own research focuses on a phenomenon called the binary Yarkovsky-O’Keefe-Radzievskii-Paddock (bYORP) effect, in which sunlight gives asteroids tiny nudges to change their motion over thousands of years. 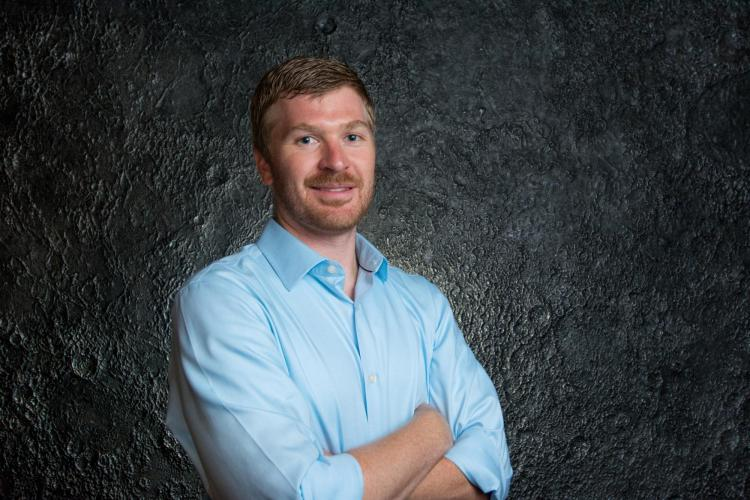 He sat down with CU Boulder Today to talk about this upcoming crash of epic proportions.

Disaster movies with killer asteroids are common in Hollywood—2021’s Don’t Look Up is one recent example. But how much of a threat do asteroids like the Didymos system actually pose to Earth?

We don't know of any significant danger posed by asteroids right now. But we also know for a fact that major impacts have happened in the past, the asteroid that killed the dinosaurs being the extreme case. There are also more reasonably-sized asteroids that could, and have in the past, had large effects here on Earth.

It’s really interesting to be involved in an effort to figure out how to proactively prevent those kinds of disasters, instead of just waiting until they become an imminent problem.

The collision, which is on track for Sept. 26, sounds like it will be pretty spectacular. What will we be able to see from the crash?

DART will be sending back images to Earth as it approaches the asteroid. We're coming in about six kilometers per second, or more than 14,000 miles per hour, so we’re moving really fast. Three seconds out, we’re still about 18 kilometers, or 11 miles, away. We don't know exactly how close it will be when it sends off its last image, but we should see some pretty detailed images. 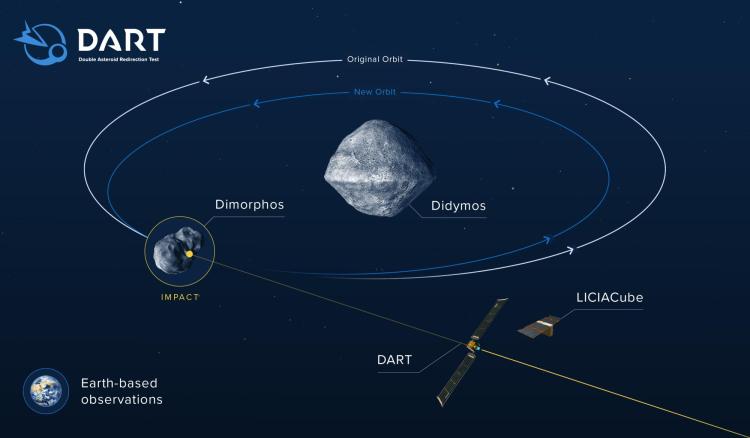 Click to enlarge
Graphic showing how DART's impact will influence the orbit of the asteroid Dimorphos around Didymos. (Credit: NASA/Johns Hopkins APL)

Even after all that, NASA estimates that the time it takes for Dimorphos to orbit Didymos will only change by a few minutes after the impact—a relatively minor shift. Will those few minutes make a difference?

Minor in the short term. But my own research is looking further down the line, like 100,000 years. A small change in the orbit of Dimorphos might not seem like much now. But on those time scales, this test could be the difference between remaining as a stable binary system to potentially causing the two bodies to come back together or, eventually, migrate apart.

What’s going to happen in the aftermath of this crash?

The test is going to slow Dimorphos down in its orbit, so that would bring it a little closer to Didymos. But there are a lot of uncertainties. Neither of the asteroids are shaped like perfect spheres, and they’re both spinning in space as they orbit around each other. When all that stuff is thrown together, it gets really complicated to predict.

What are some of the other factors that make those calculations so complicated?

I study something called the binary YORP effect. Sunlight is hitting these asteroids all the time, and the side that's being lit up, heats up. Then as that hot side rotates away from the sun, all that heat gets reradiated into space.

It’s a very small push, but if it keeps happening in the same way over 100,000 years or more, it adds up and can change the orbit.

How will DART affect that slight nudge?

The effect is dependent on the shape of the asteroids. With DART, we’re going to make a crater on Dimorphos that's several meters across. Some people predict that it could be a lot larger. If that happens, it could dramatically change the mass distribution of the asteroid, which affects gravity and the bYORP effect.

The European Space Agency (ESA) is launching a follow-up mission called Hera in 2024, and that will get to Didymos in 2026. We're going to get some data from the spacecraft right when the DART experiment happens and will track and observe the asteroids with telescopes from Earth. Then a few years later, Hera will come and investigate it very closely.

It’s really cool because we’re making predictions about what will happen now. But we get to actually go test those predictions a few years later.

A first-of-its-kind sensor, developed by a team at the Laboratory for Atmospheric and Space Physics, will measure sunlight reflecting from Earth with more accuracy than any instrument in space or on the ground. END_OF_DOCUMENT_TOKEN_TO_BE_REPLACED

Ahead of the historic space mission, crew members joined CU Boulder researchers Allie Anderson and Torin Clark to talk about how the eye changes in space, experiencing "space motion sickness" and more. END_OF_DOCUMENT_TOKEN_TO_BE_REPLACED

NASA’s Orion spacecraft blasted off this morning from Florida in the first stage of its 25-day journey to circle the moon and return to Earth. Two CU Boulder scientists talk about what lies in store for the space agency’s ambitious Artemis Program. END_OF_DOCUMENT_TOKEN_TO_BE_REPLACED
Return to the top of the page