As temperatures soar in early September, it’s clear that Colorado’s summers are lasting longer. They’re also starting earlier, with mountain snow melting away in May instead of June.

As spring unfolds into summer each year on Niwot Ridge, just north of Nederland, snowdrifts give way to small shrubs and colorful lichens on this exposed tundra, resembling a coral reef at 10,000 feet above sea level. A portion of the landscape will also soon be covered in what looks like more like heaping mounds of chocolate chip ice cream.

For the past five years, a small team of research assistants and volunteers have hiked up Niwot Ridge in late May to set the stage for a unique experiment in which they spread 5,000 pounds of black sand across portions of the remaining snowpack.

Their goal? To simulate the not-so-distant future effects of a warming planet on alpine ecosystems. Researchers want to know what may happen as mountain snowpack melts sooner and summer lasts longer each year due to rising temperatures from climate change.

“We're seeing a large influence of these longer summers. When things warm up and melt out earlier, those seem to be years that really affect the system—the plants, the pikas and the water quality,” said Katharine Suding, lead investigator of the project, and professor of distinction in the Department of Ecology and Evolutionary Biology and the Institute of Arctic and Alpine Research (INSTAAR). “And the best way to figure out what might happen in the future is to test it out.”

Each season, the team spreads the sand on top of the snow at five test plots across the ridge, leaving some snow next to it untouched. Throughout the summer, dozens of graduate students, volunteers and faculty run soil sensors, collect vegetation and gather data about pollinators to see what kinds of changes, if any, the snow melting sooner causes on the tundra beneath.

The project is just one of dozens of research projects conducted by CU Boulder scientists and partner institutions at the century-old Mountain Research Station. The effort is also part of the Niwot Long-term Ecological Research Program, the longest running NSF-funded project at CU Boulder.

“It’s quite an ambitious project,” said Jennifer Morse, climate technician at the Mountain Research Station, who oversees the execution of experiments like this one. 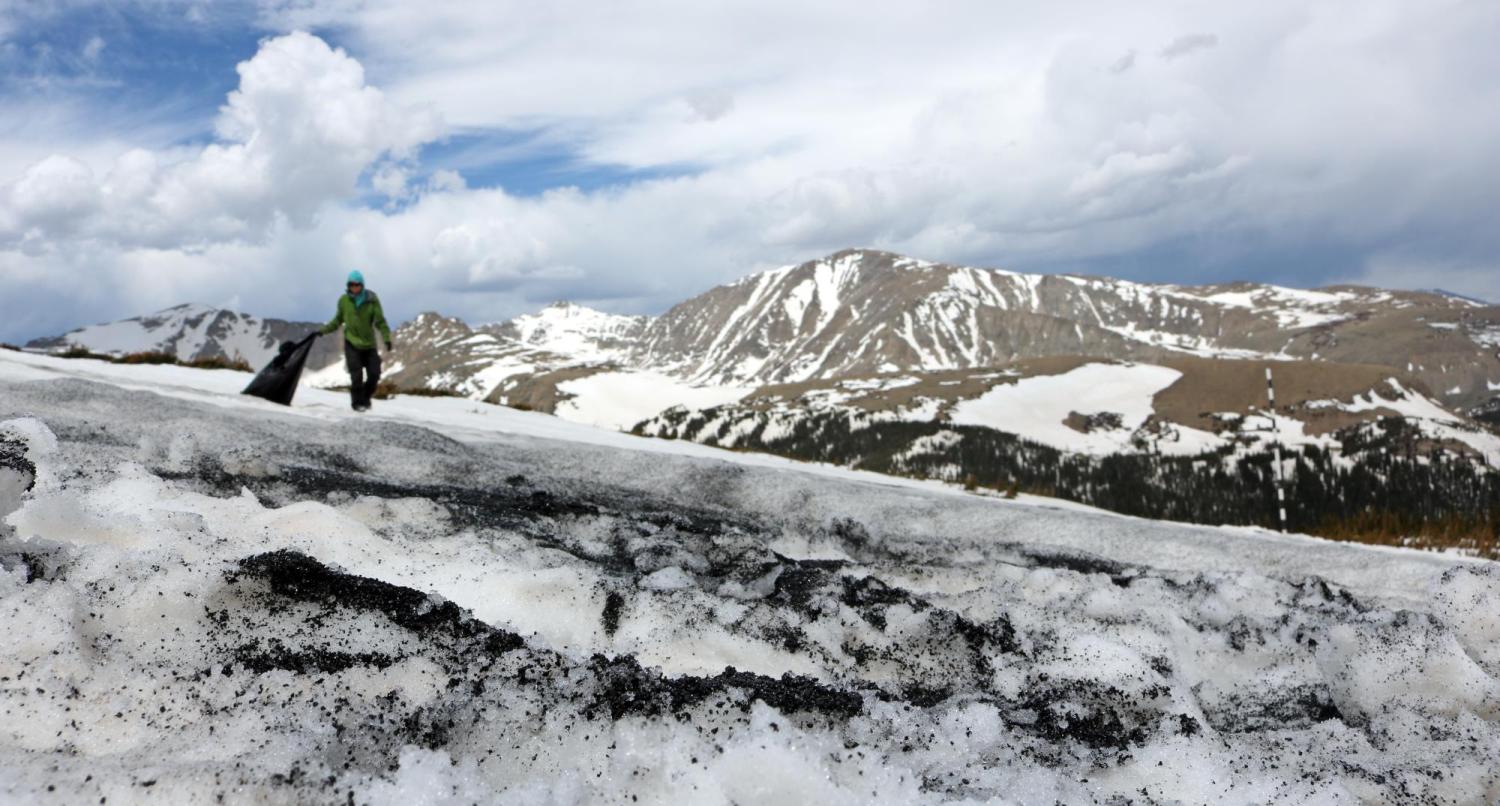 Samuel Yevak carries bags of black sand to where he will apply it on top of the snowpack. In the foreground, black sand has already been applied. (Credit: Kelsey Simpkins / CU Boulder)

Peak snowpack typically occurs around late May or early June, although it may at first seem a misnomer. While the snow is still yards deep in some places, requiring snowshoes or skis to cross, in others it’s already long gone. The goal is to apply the sand when the snow is no longer accumulating and is instead starting to melt, so the sand they apply isn’t covered up by additional snowfall.

This timing makes for a formidable feat. Hauling 5,000 pounds of sand up the mountain in late spring requires the use of a utility task vehicle (UTV) with snow treads, as windswept and melting mounds of snow along the road from the station to the sites would prove impossible for a regular vehicle.

Once the researchers have ridden or skied up the ridge, they visit each of the five test plots over the course of a few days. They first gather snow depth measurements at set intervals on both sides of each test plot, which they’ll do every two weeks until the snow fully melts. 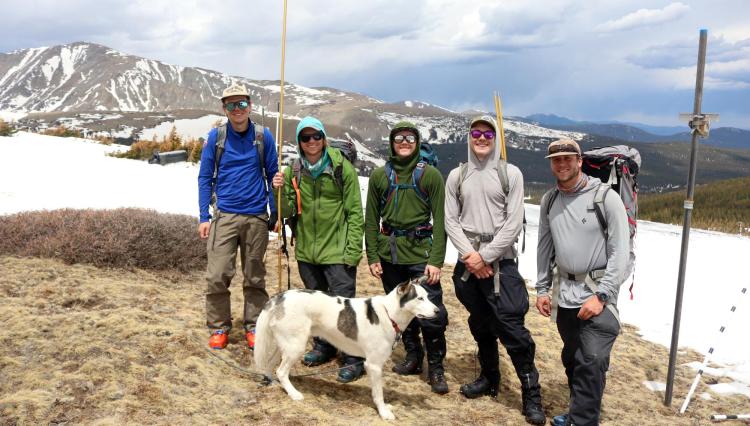 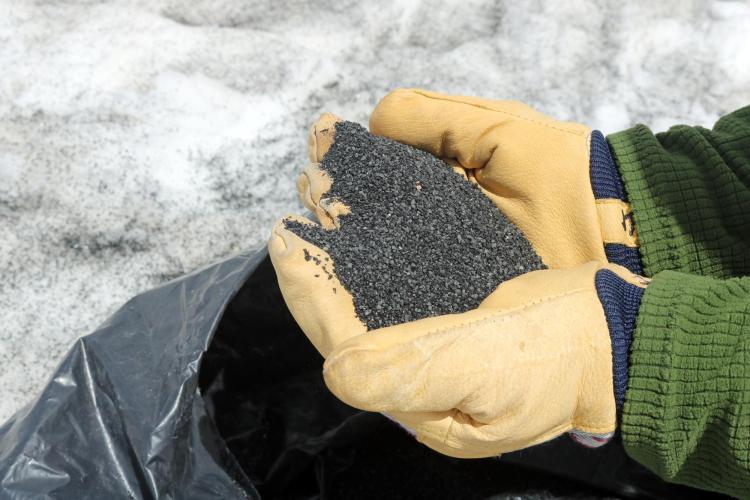 Will Fuller holds a handful of black sand, before tossing it on top of the snow. (Credit: Kelsey Simpkins / CU Boulder)

The researchers then grab 50-pound bags of black sand out of the large bins used to transport them to the ridge. They position themselves along the edges of one half of the test plot, taking care not to step within it. Then with great enthusiasm, they toss handfuls of sand up into the air and out onto the snow. As it lands, it embeds in the white, wet stuff like black candy sprinkles. They work around the plot to empty 10 bags of sand—500 pounds per plot—to create a giant rectangle resembling a mountain-sized tub of cookies and cream.

The method mimics a natural phenomenon, as dust storms sometimes blow a fine layer of dust or sand on top of snow in the mountains, causing it to melt faster. But it’s all done by hand for this experiment, and it’s hard work dragging around heavy bags of sand—especially at 10,000 feet above sea level.

“Even a simple thing up here is hard,” said Samuel Yevak, professional research assistant and Limnology Field Lead at the Niwot Ridge Long Term Ecological Research (LTER), while leading the application of blank sand to several test plots on May 17, 2022.

“White reflects more light, and the darker colors absorb more light, so the sand gets spread on top will make the snow melt faster, which is simulating early snow melt. This helps us think about climate warming and where we're headed in the future,” said Yevak. “We're going to see more and more early snowmelt likely.”

When all the snow melts on both sides, they spread an equal amount of sand (another 500 pounds) on the control side of the plot to negate any effects of the sand itself on their data collection.

The changing speed of seasons

Suding hopes to better understand how this increase in the speed of snowmelt affects the vegetation underneath, the soil and the water downstream. She’s already seeing some small changes.

“The growing season starts earlier, things green up faster, and they have a longer period of growth,” said Suding. “But then the other interesting thing that's happening is that plants are shutting down earlier. What we think is happening is that soils are drying out earlier, and it is moisture stress that ends the growing season. So we are advancing the start of the season, but it's also affecting the end of the summer.” 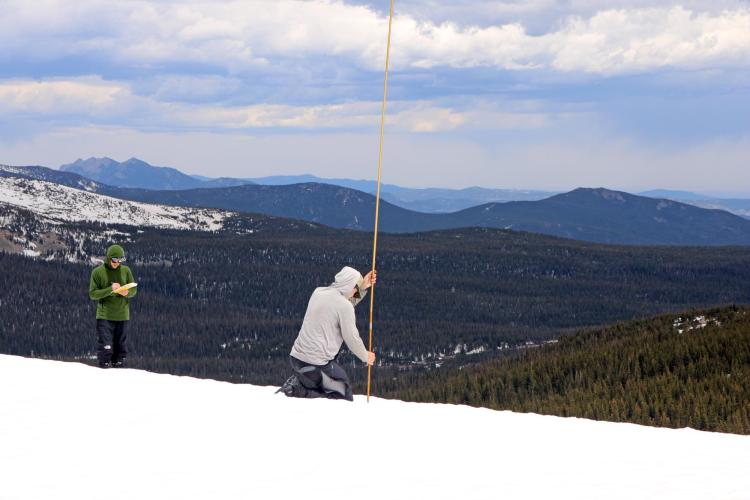 The black sand experiment will run for two or three more years, until the sand accumulates enough that it could affect the data collection. But the work will live on through the next experiments that Suding and others at the Mountain Research Station use to answer the questions which arise from this work. The experiment will also help inform those who live downstream, including the City of Boulder and its water department.

“The earlier melt out on Niwot Ridge affects the amount of water that Boulder receives and the water quality,” said Suding.

Because it is one of the most biodiverse areas in Boulder County, understanding changes in the Niwot Ridge ecosystem can help Rocky Mountain National Park manage their natural resources to the north and even inform urban groups like the Denver Botanical Society for decades to come.

“Many of our partners want to make evidence-based decisions in how they manage their natural resources,” said Suding. 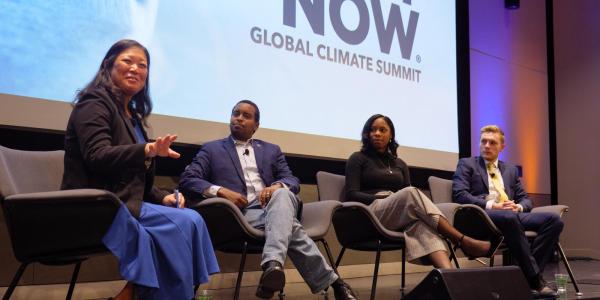 After an at-times emotional first day of the summit Friday, in which panelists from around the globe made the undeniable case that climate change is a humanitarian crisis, speakers on Day 2 focused on accountability, called for action and suggested that a human rights framing is precisely what’s needed to spark action. END_OF_DOCUMENT_TOKEN_TO_BE_REPLACED 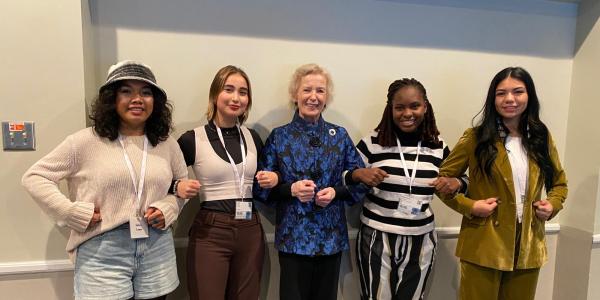 On the second day of the Right Here, Right Now Global Climate Summit, keynote speaker and former Irish President Mary Robinson took the stage to get people riled up and excited about making change on the climate change front through women-led efforts, such as Project Dandelion. END_OF_DOCUMENT_TOKEN_TO_BE_REPLACED 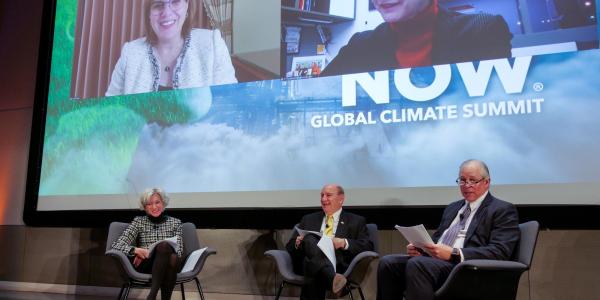 From groundbreaking research to community engagement to optimizing their own operations, universities are positioned to play a leading role in addressing the human rights crisis of climate change–both globally and locally. END_OF_DOCUMENT_TOKEN_TO_BE_REPLACED
Return to the top of the page