The campus tour officially kicked off the second phase of an ambitious research and education partnership launched late last summer. Olson and Brock are the designated points of contact and collaboration for CU as the new partnership moves into its next steps. 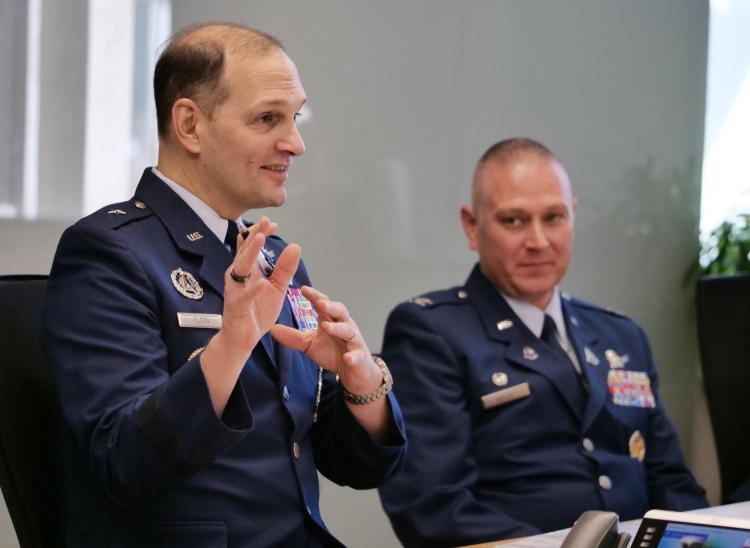 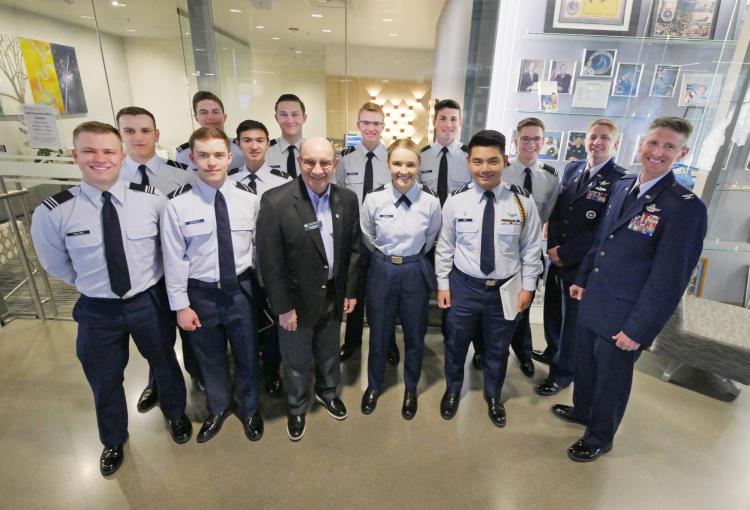 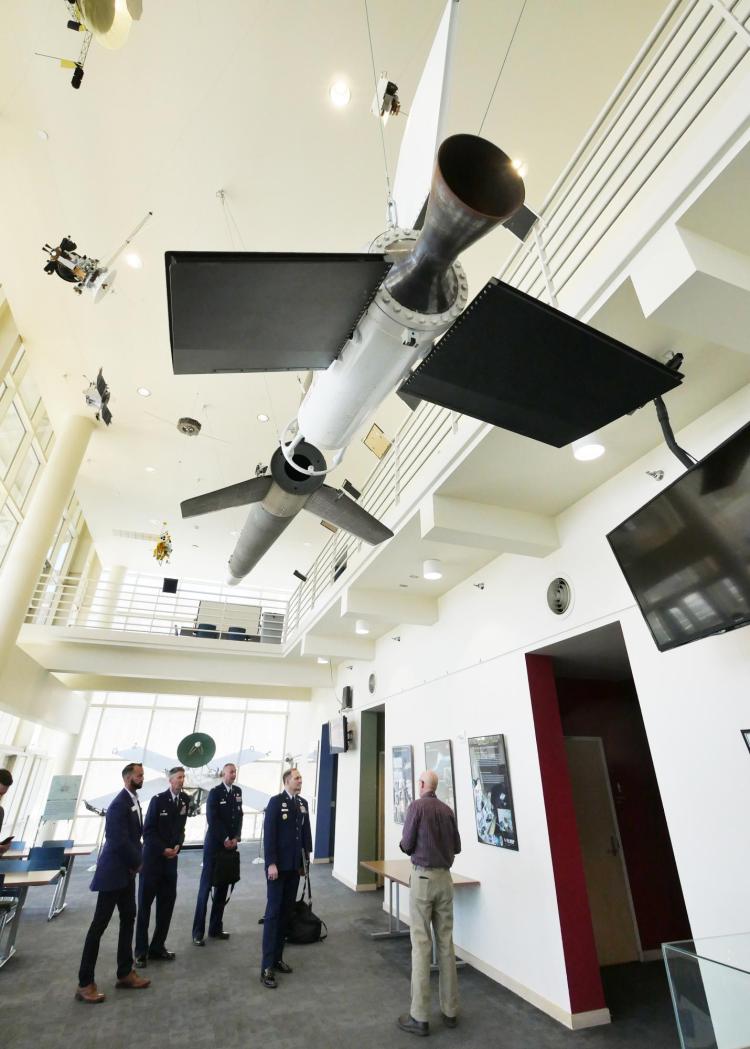 Gen. Olson and his colleagues check out a historic rocket at LASP. (Credit: Casey Cass/CU Boulder)

They met with aerospace and industry leaders from across Colorado, checked out new technologies for tracking the paths of satellites in space and talked future space ambitions. At CU Boulder’s Aerospace Engineering Sciences building, Olson and Brock met with CU President Todd Saliman, CU Boulder Chancellor Philip DiStefano, Vice Chancellor for Research and Innovation Terri Fiez and others. The discussion focused on the importance of building a diverse workforce and tapping an interdisciplinary approach to create the next generation of aerospace leaders.

The event was organized by the Center for National Security Initiatives (NSI) at CU Boulder.

“Pretty much all kids love three things: dinosaurs, Legos and space. We can’t lose that,” said Olson, mobilization assistant to the Chief of Space Operations and holder of five engineering degrees, including a doctorate in industrial and systems engineering. “It is space for all. We have a need for a rich and broad tapestry of people.”

Olson noted that to be successful, the USSF will need to tap into the excitement of students from across many different fields—including engineering but also law, history, the arts and more.

The CU system became one of the first universities to join the Space Force’s University Partnership Program in August 2021. Among other goals, the agreement will build CU Boulder’s capacity for educating and training the USSF's next generation of enlisted men and women, known as “guardians.”

Saliman added that the partnership builds upon Colorado’s leadership in blasting off beyond Earth’s atmosphere. The state is home to about 300 aerospace companies.

“This ecosystem has extraordinary power,” Saliman said. “We feel it’s one of the [state’s] best-kept secrets, and we don’t want to keep it a secret anymore.”

Also not a secret: CU Boulder’s stable of students with a passion for space. Olson and Brock took time to talk shop with nearly a dozen cadets from the regional Air Force ROTC detachment. When it comes to exploring space, “you are living in an extraordinary time,” said Olson, who also has two sons currently at the U.S. Air Force Academy near Colorado Springs.

The budding engineers asked the general about the future of artificial intelligence and what role the USSF will play as Americans begin to build permanent colonies on the moon and Mars.

Olson also mentioned that the USSF, which celebrated its second anniversary in December, is eager to recruit young engineers and scientists with a unique worldview—those who are able to appreciate the bigger picture of space exploration.

“If you’re a STEM person, you better also know philosophy and law,” Olson said. “Because that’s the stuff that makes the world go round.”

ROTC cadet Zach Lesan, a senior at CU Boulder studying aerospace engineering, will join the USSF as a second lieutenant when he graduates this spring. Lesan didn’t let a lack of sleep interrupt his passion for space. He had returned to Boulder early that morning from California. Lesan and fellow students from the CU Sounding Rocket Laboratory had spent their weekend launching a rocket more than 30,000 feet into the air above the Mojave Desert.

“My eventual goal is to die on Mars,” Lesan said. “That’s because I think making life multi-planetary is absolutely critical. … It creates an exciting future.”

Boyd said CU’s partnership with the Space Force will spur science in a wide range of fields at the university. These include efforts to design new vehicles that fly at incredibly fast speeds and technologies that can help people on the ground follow the trajectories of objects in space—an arena known as “space domain awareness.”

The general and entourage couple of his teammates got to see some of that research in action as they toured facilities in the university’s Aerospace Engineering Sciences building and at the Laboratory for Atmospheric and Space Physics (LASP).

“Space Force was established as a new arm of the military because of the increasing national security threats in space,” said Boyd, professor in the Ann and H.J. Smead Department of Aerospace Engineering Sciences. “We face ever-evolving threats that will only be addressed through the development of advanced technologies and a workforce educated on relevant space topics.”

Olson added that he will bring his own love of Colorado to the new partnership—although he’ll still root for the Air Force when the Falcons play the CU Boulder Buffaloes in September 2022.

For decades, a community of "data stewards" has toiled behind the scenes to build records showing that humans, and not the sun, are responsible for driving the planet's climate into dangerous territory. END_OF_DOCUMENT_TOKEN_TO_BE_REPLACED

Astrophysicist John Bally takes a look at the first images from NASA's James Webb Space Telescope—an instrument that is gazing farther into space and time than anything ever built by humans. END_OF_DOCUMENT_TOKEN_TO_BE_REPLACED

When NASA's OSIRIS-REx spacecraft arrived at the asteroid Bennu, scientists discovered something surprising: The asteroid's surface wasn't smooth like many were expecting but was covered in large boulders. Now, a team of physicists think they know why. END_OF_DOCUMENT_TOKEN_TO_BE_REPLACED
Return to the top of the page