The world must halt its increase in greenhouse gases within the next three years, cut them by 43% in the next seven, and eliminate them entirely by 2050 to avoid catastrophic and irreversible climate change impacts this century, according to a new report released this week by the Intergovernmental Panel on Climate Change (IPCC). But along with dire warnings, the assessment also brings good news: We already have the tools necessary to make these changes, and they’re cheaper than ever before.

The assessment is the third in a trilogy from the international body tasked with assessing the latest scientific research on climate change, and in addition to analyzing a wide variety of mitigation solutions, it calls for rapid, systemic change. From reduced and more efficient energy use, to the electrification of our energy grids and improving how we build and live in our cities, it makes clear the solutions are affordable and available now.

“We’re not talking about business as usual,” said Working Group III Co-Chair Jim Skea at the Monday press conference unveiling the report. “We know what to do. We know how to do it. It’s time to take action.”

The 2015 Paris Climate Agreement established that in order to stem the tide of sea level rise, increasing heat waves, intensifying storms, widespread water shortages and the extinction of millions of plants and animals, global warming must be kept below 2.7 degrees Fahrenheit (1.5 degrees Celsius) above pre-industrial levels.

“We have to address inequality, focus on wellbeing, and approach this as a human rights issue, efficiently and significantly,” said Max Boykoff, contributing author to the report, chair of the Department of Environmental Studies at CU Boulder and fellow at the Cooperative Institute for Research in Environmental Sciences (CIRES).

But the challenge is a daunting one. Between 2010 and 2019, average annual global greenhouse gas emissions were at their highest levels in human history, according to the report. On our current track, global average temperatures are projected to rise 5.8 F (3.2 C) above pre-industrial levels by the end of the century—twice the Paris goal.

However, the report also finds that the rate of emissions growth has slowed in the past decade and climate action is increasing.

In the face of record inflation, rising energy prices due to the war in Ukraine and a continuing global pandemic, this timely report asserts that achieving this ambitious feat should not only be a top priority, but that mitigating climate change can also address other global needs. 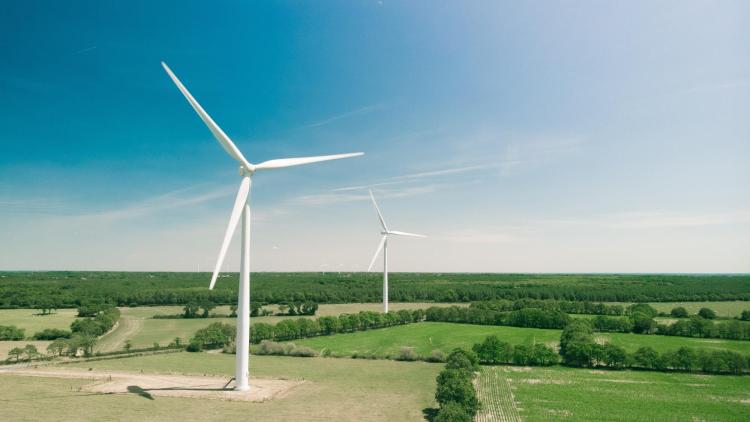 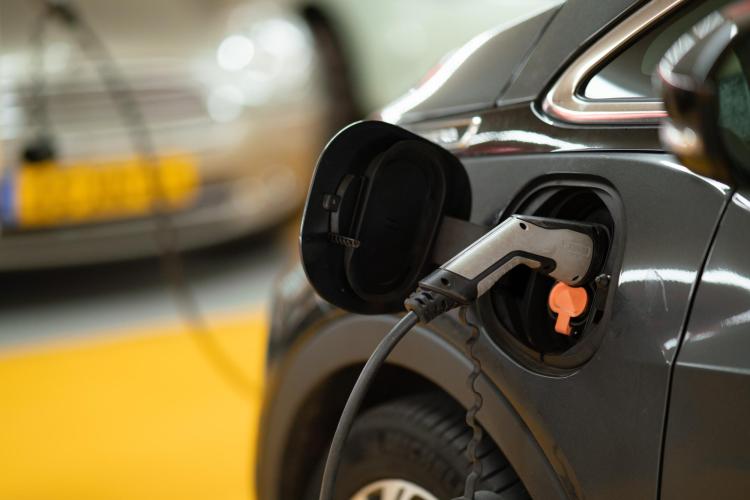 Wind power and electric vehicles are two cost-effective mitigation strategies we can implement and scale up quickly, according to the new report.

The report strongly emphasizes decarbonizing the energy sector through electrification: replacing fossil fuels anywhere and everywhere possible with electric energy. Where that’s difficult, as with shipping and aviation, biofuels and alternative fuels like hydrogen can provide a temporary transition until battery technology catches up, it suggests.

This also makes economic sense, the report stresses. Since 2010, the cost of wind, solar and batteries has declined as much as 85%, and in some cases costs have fallen below those of fossil fuels.

Continuing to create national, state and local incentives for using renewable energy will be key, said Lisa Dilling, professor of environmental studies at CU Boulder and fellow at the Cooperative Institute for Research in Environmental Sciences (CIRES).

And Colorado has committed to getting more electric vehicles (EVs) on the road, through sales goals and state infrastructure policy. Such commitments, Dilling said, can incentivize manufacturers to create products that meet these policy goals.

The report also notes that urban areas, responsible for an increasing share of the world’s population and carbon emissions since 2010, can lead the way in climate change mitigation by electrifying transportation systems and increasing buildings’ energy efficiency.

But Kutscher and Dilling acknowledge that this transition will come with logistical, economic and cultural challenges. Exacerbating that challenge is the fact that, as temperatures rise due to climate change, we will need energy to keep ourselves cool.

“It’s not an overnight transition. Our lives are built around using energy,” said Dilling. “But we have all these other options now that are cost effective. We don’t have to get it out of the ground anymore.”

While the authors note for the first time in a major IPCC report that anthropogenic carbon dioxide removal strategies will be necessary to meet the Paris Agreement, they emphasize that carbon capture and storage technologies still “require more research, up-front investment, and proof of concept,” before implementation at scale is possible.

“There is no silver bullet. Any meaningful global solution will likely be a combination of multiple mitigation strategies,” said Oana Luca, assistant professor of chemistry and RASEI fellow-elect.

The report recommends improved, equitable land use and “natural carbon storage” options, like planting trees and using farming methods that sequester carbon in soil, over high-tech tools to reduce and trap emissions.

While methods to directly capture carbon dioxide from the air do exist, and in some places at scale, they are immensely energy intensive, said Luca, who studies electrochemical carbon capture. 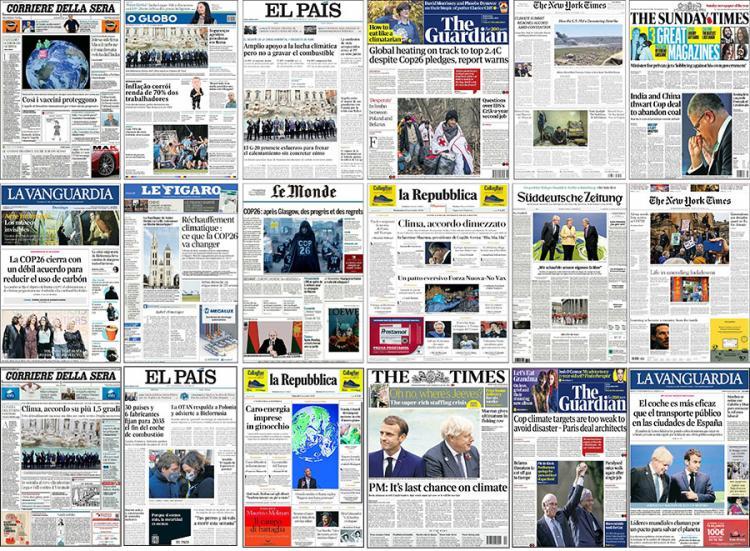 Front page coverage of COP26 around the world at various points of the two-week negotiations in November 2021. (Credit: Media and Climate Change Observatory)

Harness the power of media

The report also acknowledges journalists and communicators as key players in the mitigation of climate change, as the general public is less likely to read the several hundred-page report than to turn on the TV, radio, listen to a podcast or read a written article about it.

“This report takes into account the critical role media plays in our society,” said Boykoff, lead project investigator of the Media and Climate Change Observatory (MeCCO), an international, multi-university collaboration based at CU Boulder.

Boykoff and MeCCO’s contribution in the report highlights the role media play in shaping public discourse and accelerating climate action. He points out that media coverage of climate change has been growing, and media representation of climate science has become more accurate over time.

But on the flip side, Boykoff notes, scientifically misleading information can fuel polarization.

“We rely on the media to address these stories,” said Boykoff. “It’s good to recognize the critical roles and responsibilities that journalists and editors have in communicating these intersecting challenges.”

From pledges to action

The IPCC will complete a synthesis report in September, and collectively this report and its two predecessors from the past year will inform the international climate change conference COP27 in Egypt in November 2022.

It’s now up to governments, policymakers and investors to implement changes, and quickly. Even taking into account current climate pledges from nations around the world, the globe is on track for a 14% increase in emissions this decade—sending us in the wrong direction.

“This report demonstrates the wide chasm between talk and policy,” said Boykoff.

Report authors also condemned the building of any new fossil fuel infrastructure, arguing that it will soon become obsolete, negatively impacting investments and the economy.

This comes within two weeks of the White House announcing that the U.S. will rapidly increase exports of liquefied natural gas to Europe, release up to 180 million barrels of oil from a strategic reserve, and consider exemptions to a ban on financing of new carbon-intensive fossil fuel projects overseas to counteract the impact of Russia’s invasion of Ukraine on energy markets.

United Nations Secretary-General António Guterres had sharp words during Monday’s press conference on the report, for governments who say one thing, but do another, when it comes to climate action.

“Climate activists are sometimes depicted as dangerous radicals. But the truly dangerous radicals are the countries that are increasing the production of fossil fuels,” said Guterres. “It's time to stop burning our planet and start investing in abundant renewable energy all around us.”

Birds that can live at 14,000 feet and also breed at sea level might have evolved more quickly than previously thought. END_OF_DOCUMENT_TOKEN_TO_BE_REPLACED

Despite the Inflation Reduction Act, U.S. progress on climate change remains stuck in a climate conundrum, CU Boulder experts say, hampered by politics, complexity and the scope of the problem. END_OF_DOCUMENT_TOKEN_TO_BE_REPLACED

A CU Boulder-led study shows that between 1985 and 2019 in Brazil’s Atlantic Forest, deforestation decreased and reforestation increased on lands where Indigenous communities had been able to complete a legal process to receive formal recognition of their ancestral lands. END_OF_DOCUMENT_TOKEN_TO_BE_REPLACED
Return to the top of the page