Noah rode out his flood in an ark. Winnie-the-Pooh had an upside-down umbrella. Fire ants (Solenopsis invicta), meanwhile, form floating rafts made up of thousands or even hundreds of thousands of individual insects.

A new study by engineers at CU Boulder lays out the simple physics-based rules that govern how these ant rafts morph over time: shrinking, expanding or growing long protrusions like an elephant’s trunk. The team’s findings could one day help researchers design robots that work together in swarms or next-generation materials in which molecules migrate to fix damaged spots.

The results appeared recenty in the journal PLOS Computational Biology.

“The origins of such behaviors lie in fairly simple rules,” said Franck Vernerey, primary investigator on the new study and professor in the Paul M. Rady Department of Mechanical Engineering. “Single ants are not as smart as one may think, but, collectively, they become very intelligent and resilient communities.”

In their latest study, Vernerey and lead author Robert Wagner drew on mathematical simulations, or models, to try to figure out the mechanics underlying these lifeboats. They discovered, for example, that the faster the ants in a raft move, the more those rafts will expand outward, often forming long protrusions.

“This behavior could, essentially, occur spontaneously,” said Wagner, a graduate student in mechanical engineering. “There doesn’t necessarily need to be any central decision-making by the ants.”

Wagner and Vernerey discovered the secrets of ant rafts almost by accident.

In a separate study published in 2021, the duo dropped thousands of fire ants into a bucket of water with a plastic rod in the middle—like a lone reed in the middle of stormy waters. Then they waited.

“We left them in there for up to 8 hours to observe the long-term evolution of these rafts,” Wagner said. “What we ended up seeing is that the rafts started forming these growths.”

Rather than stay the same shape over time, the structures would compress, drawing in to form dense circles of ants. At other points, the insects would fan out like pancake batter on a skillet, even building bridge-like extensions.

The group reported that the ants seemed to modulate these shape changes through a process of “treadmilling.” As Wagner explained, every ant raft is made up of two layers. On the bottom, you can find “structural” ants who cling tight to each other and make up the base. Above them are a second layer of ants who walk around freely on top of their fellow colony-members.

Over a period of hours, ants from the bottom may crawl up to the top, while free-roaming ants will drop down to become part of the structural layer.

“The whole thing is like a donut-shaped treadmill,” Wagner said. 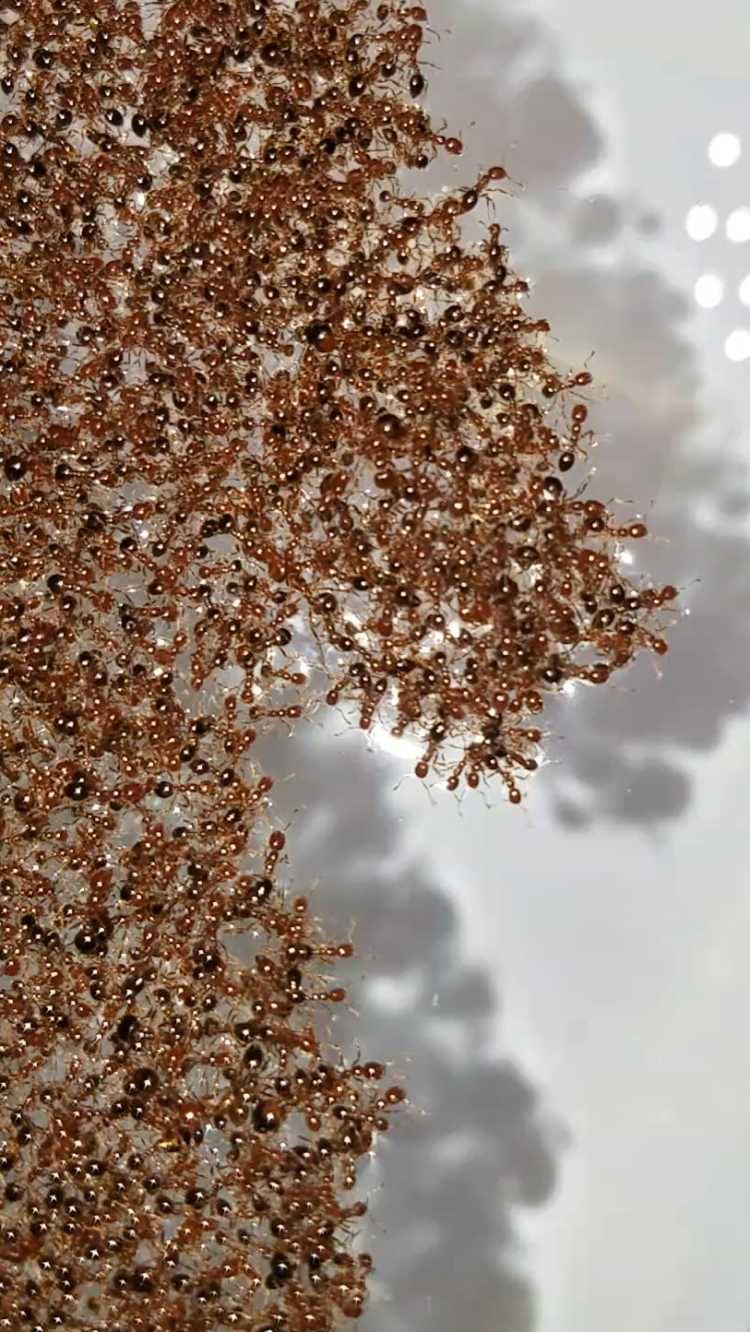 In the new study, he and Vernerey wanted to explore what makes that treadmill go round.

To do that, the team created a series of models that, essentially, turned an ant raft into a complicated game of checkers. The researchers programmed roughly 2,000 round particles, or “agents,” to stand in for the ants. These agents couldn’t make decisions for themselves, but they did follow a simple set of rules: The fake ants, for example, didn’t like bumping into their neighbors, and they tried to avoid falling into the water.

When they let the game play out, Wagner and Vernerey found their simulated ant rafts behaved a lot like the real things.

In particular, the team was able to tune how active the agents in their simulations were: Were the individual ants slow and lazy, or did they walk around a lot? The more the ants walked, the more likely they were to form long extensions that stuck out from the raft—a bit like people funneling toward an exit in a crowded stadium.

“The ants at the tips of these protrusions almost get pushed off of the edge into the water, which leads to a runaway effect,” he said.

Wagner suspects fire ants use these extensions to feel around their environments, searching for logs or other bits of dry land.

The researchers still have a lot to learn about ant rafts: What makes ants in the real world, for example, opt to switch from sedate to lazy? But, for now, Vernerey says engineers could learn a thing or two from fire ants.

“Our work on fire ants will, hopefully, help us understand how simple rules can be programmed, such as through algorithms dictating how robots interact with others, to achieve a well-targeted and intelligent swarm response,” he said.

A collaborative study, including CU Boulder associate professor Andrew McAdam, investigates how the risks and rewards of red squirrel reproduction are a microcosm of evolutionary patterns. END_OF_DOCUMENT_TOKEN_TO_BE_REPLACED

What happens when an expert on natural language processing asks a chatbot to write a children's book in the style of Dr. Seuss? Professor Kai Larsen put the question to the test. END_OF_DOCUMENT_TOKEN_TO_BE_REPLACED

A model of your very own kidney made entirely from soft and pliable polymers? Researchers at two CU campuses are on the cusp of 3D printing realistic replicas of human anatomy. END_OF_DOCUMENT_TOKEN_TO_BE_REPLACED
Return to the top of the page