Title image: A young study participant tries to get some sleep. New research shows that even dim light exposure in the hour before bedtime can disrupt slumber in young children. Credit: Casey Cass/CU Boulder

Even slight exposure to light can prompt the critical sleep-promoting hormone melatonin to plummet in preschoolers in the hour before bedtime, potentially disrupting slumber long after the light goes out, according to new CU Boulder research.

The study, published this month, is the latest in a series, funded by the National Institutes of Health, examining how the central body clock of young children is unique. It suggests that preschoolers are highly susceptible to the physiological impacts of light at night, and some children may be even more sensitive than others.

“Our previous work showed that one, fairly high intensity of bright light before bedtime dampens melatonin levels by about 90% in young children,” said first author Lauren Hartstein, a postdoctoral fellow in the Sleep and Development Lab at CU Boulder. “With this study, we were very surprised to find high melatonin suppression across all intensities of light, even dim ones.”

Light is the body’s primary time cue, influencing circadian rhythms that regulate everything from when we feel tired or hungry to what our body temperature is throughout the day.

When light hits the retina, a signal transmits to a part of the brain called the suprachiasmatic nucleus, which coordinates rhythms throughout the body, including nightly production of melatonin. If this exposure happens in the evening as melatonin is naturally increasing, it can slow or halt it, delaying the body’s ability to transition into biological nighttime. 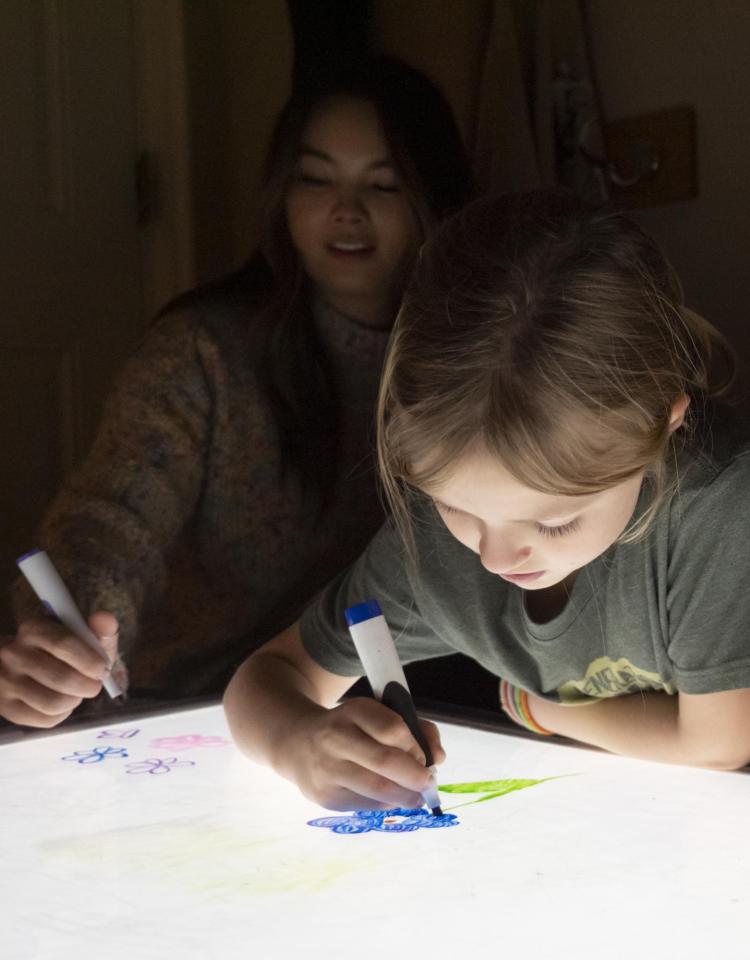 Because children’s eyes have larger pupils and more transparent lenses than adults, light streams into them more freely. (One recent study showed that the transmission of blue light through a 9-year-old’s eye is 1.2-times higher than that of an adult.)

“Kids are not just little adults,” said senior author Monique LeBourgeois, an associate professor of Integrative Physiology and one of the few researchers in the world to study the circadian biology of young children. “This heightened sensitivity to light may make them even more susceptible to dysregulation of sleep and the circadian system.”

Research in a ‘cave’

To quantify how susceptible they are, the researchers collaborated with Colorado School of Mines mathematician Cecilia Diniz Behn for a new study.

They enlisted 36 healthy children, ages 3 to 5 years, for a nine-day protocol in which they wore a wrist monitor that tracked their sleep and light exposure. For seven days, parents kept the children on a stable sleep schedule to normalize their body clocks and settle them into a pattern in which their melatonin levels rose at about the same time each evening.

On the eighth day, researchers transformed the children’s home into what they playfully described as a “cave”—with black plastic on the windows and lights dimmed—and took saliva samples every half hour starting in the early afternoon until after bedtime. This enabled the scientists to get a baseline of when the children’s biological night naturally began and what their melatonin levels were.

On the last day of the study, the young study subjects were asked to play games on a light table in the hour before bedtime, a posture similar to a person looking at a glowing phone or tablet. Light intensity varied between individual children, ranging from 5 lux to 5,000 lux.  (One lux is defined as the light from a candle 1 meter, or about 3 feet, away).

When compared to the previous night with minimal light, melatonin was suppressed anywhere from 70% to 99% after light exposure. Surprisingly, the researchers found little-to-no relationship between how bright the light was and how much the key sleep hormone fell.  In adults, this intensity-dependent response has been well documented.

Even in response to light measured at 5 to 40 lux, which is much dimmer than typical room light, melatonin fell an average of 78%. And even 50 minutes after the light extinguished, melatonin did not rebound in most children tested.

“Together, our findings indicate that in preschool-aged children, exposure to light before bedtime, even at low intensities, results in robust and sustained melatonin suppression,” said Hartstein.

What parents can do

This does not necessarily mean that parents must throw away the nightlight and keep children in absolute darkness before bedtime. But at a time when half of children use screen media before bed, the research serves as a reminder to all parents to shut off the gadgets and keep light to a minimum to foster good sleep habits in their kids. Notably, a tablet at full brightness held 1 foot from the eyes in a dark room measures as much as 100 lux.

For those children who already have sleep problems?

“They may be more sensitive to light than other children,” said LeBourgeois, noting that genes—along with daytime light exposure—can influence light sensitivity. “In that case, it’s even more important for parents to pay attention to their child’s evening light exposure.”

Future research will look at the influence of morning light exposure on children and differing effects from blue light versus red light. Parents interested in having their children participate can find more information here.

Seventy-eight years ago on Jan. 27, the Auschwitz concentration camp closed after liberation by the Soviet army. Professor Janet Jacobs, who researches genocide, trauma and collective memory, discusses the ways in which the experiences and trauma of Holocaust survivors are passed down through generations. END_OF_DOCUMENT_TOKEN_TO_BE_REPLACED

A model of your very own kidney made entirely from soft and pliable polymers? Researchers at two CU campuses are on the cusp of 3D printing realistic replicas of human anatomy. END_OF_DOCUMENT_TOKEN_TO_BE_REPLACED

Legalizing recreational cannabis does not increase substance use disorders or use of other illicit drugs in adults and may reduce alcohol-related problems, according to new research. The study also found no link between cannabis legalization and increases in cognitive, psychological, social, relationship or financial problems. END_OF_DOCUMENT_TOKEN_TO_BE_REPLACED
Return to the top of the page