This announcement was adapted from a version published by the University of Notre Dame. Read the original story here.

Researchers at CU Boulder will take part in a $25 million effort to study a natural resource that’s becoming increasingly in demand: the radio frequency spectrum.

The U.S. National Science Foundation (NSF) today announced the new initiative, called SpectrumX. It will be led by the University of Notre Dame and will bring together experts from 29 organizations to transform the landscape of spectrum research, education, collaboration and management.

“We’re delighted to be a leading partner in the first NSF Spectrum Innovation Center,” said Terri Fiez, vice chancellor for research and innovation at CU Boulder. “The diverse team of CU Boulder researchers, university and industry partners and federal labs, along with a unique entrepreneurial approach, truly embodies the spirit of collaboration and innovation that have become the hallmark of our research enterprise.” 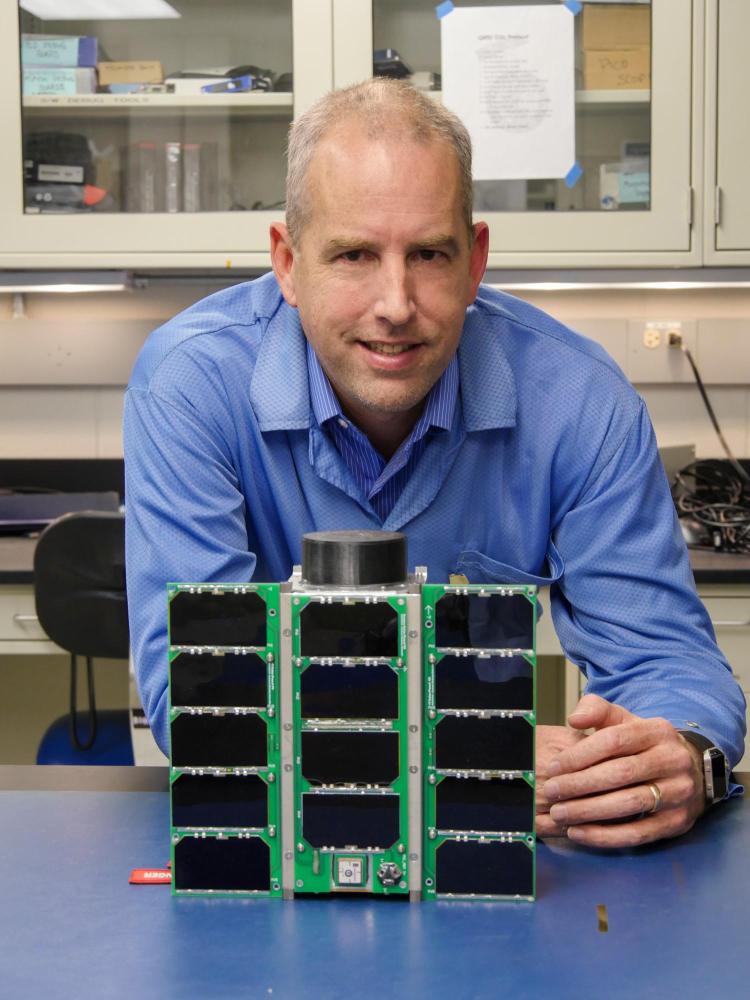 Scott Palo with a small satellite called a CubeSat. (Credit: College of Engineering and Applied Science)

In the United States and around the world, radio frequencies are allocated to a variety of services such as mobile broadband, broadcasting and navigation (GPS) that are now mainstream and widely used. But the increasing demands of commercial wireless services, especially 5G networks, as well as the greater needs of scientific, satellite and defense applications, among others, require paradigm shifts in management of the radio spectrum and in coordination of research and development around it.

Scott Palo, who is leading CU Boulder’s work with the new center, said that his team is “thrilled” to join other Colorado-based partners in SpectrumX. They include the U.S. National Telecommunications and Information Administration (NTIA), National Institute of Standards and Technology (NIST) and National Center for Atmospheric Research (NCAR).

“Radio spectrum is a precious resource which is critical for U.S. national competitiveness,” said Palo, a professor in the Ann and H.J. Smead Department of Aerospace Engineering Sciences at CU Boulder. “CU is exceptionally well positioned to make a major impact on this issue through world class research, workforce development and private and public partnerships with a focus on equity, diversity and inclusion.”

NSF is also developing a broader government working group, and SpectrumX is forming an external advisory board. All of these groups will engage with SpectrumX on a regular basis to enhance strategic planning and translation of center results into practice.

“Given the importance and scale of all of this work, we have a tremendous opportunity to prepare a spectrum workforce of diverse, civic-minded and globally engaged scientists, engineers, economists and policymakers in the field,” said Nick Laneman, director of SpectrumX, co-director of Notre Dame’s Wireless Institute and professor of electrical engineering.

Much of the current workforce is aging, and the field has some had difficulty recruiting top young talent, Laneman said. SpectrumX will address those concerns with a comprehensive education and workforce development program—starting in middle and high school classrooms and extending through undergraduate and graduate studies to prepare students in spectrum innovation, management and economic development.

“Congestion of the radio spectrum is a key challenge for science and for all sectors of society and the economy,” said Jonathan Williams, NSF program officer. “This SpectrumX NSF Spectrum Innovation Center will be a critical national hub for spectrum research and development to help overcome the challenges of interference and radio spectrum scarcity.”

A collaborative study, including CU Boulder associate professor Andrew McAdam, investigates how the risks and rewards of red squirrel reproduction are a microcosm of evolutionary patterns. END_OF_DOCUMENT_TOKEN_TO_BE_REPLACED

What happens when an expert on natural language processing asks a chatbot to write a children's book in the style of Dr. Seuss? Professor Kai Larsen put the question to the test. END_OF_DOCUMENT_TOKEN_TO_BE_REPLACED

A model of your very own kidney made entirely from soft and pliable polymers? Researchers at two CU campuses are on the cusp of 3D printing realistic replicas of human anatomy. END_OF_DOCUMENT_TOKEN_TO_BE_REPLACED
Return to the top of the page