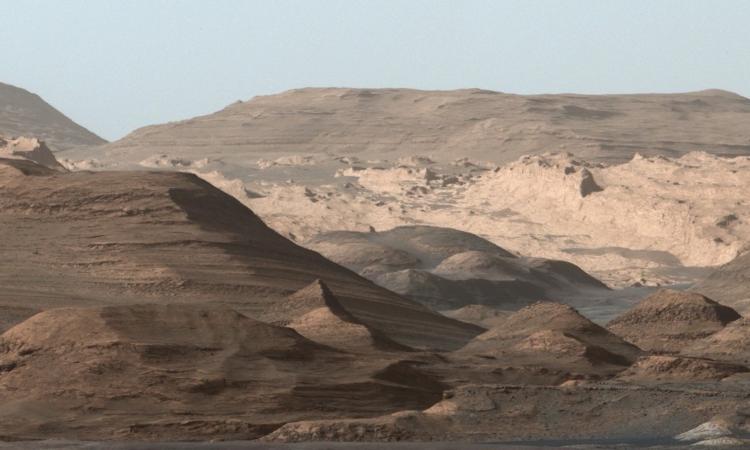 On July 20, 1969, Apollo 11 astronaut Buzz Aldrin stepped out a lunar lander onto the surface of the moon. The landscape in front of him, which was made up of stark blacks and grays, resembled what he later called “magnificent desolation.”

When it comes to desolation, however, the moon may have nothing on Mars.

The red planet circles the sun at an average distance of about 140 million miles from Earth. When people eventually visit this world—whether that’s in 20 years or 50—they may face a journey lasting 1,000 days or longer. The entire Apollo 11 mission, in contrast, lasted just a little over eight days. If future Mars astronauts get lonely, or if something more serious goes wrong, help is a long way away.

For researchers who study how human bodies and minds respond to the rigors of space travel, the scenario poses a lot of unknowns.

“We have never put someone in space for that long,” said Allie Anderson, an assistant professor in the Ann and H.J. Smead Department of Aerospace Engineering Sciences. “There will be a lot of challenges we can’t predict because the human body doesn’t always behave as we predict when living in space.”

Those challenges are in the spotlight again after NASA successfully landed its most recent non-human astronaut, a rover named Perseverance, on the surface of Mars Feb. 18. They’re also the bread and butter of researchers studying bioastronautics, or the study and support of life in space, at CU Boulder.

Anderson, for example, explores high-tech clothing that can monitor the health of astronauts as they live and work on Mars. Her research, she added, has evolved a lot as people across the globe are feeling increasingly isolated in their own lives. A second team led by engineer David Klaus studies how space habitats that employ “smart systems,” such as intelligent robots, might one day help humans to survive on the surface of an alien world.

It’s a research focus that comes with zero room for error, said Klaus, a professor of aerospace engineering sciences at CU Boulder.

“Today, if something breaks on the International Space Station, astronauts can always get into a capsule and come home,” he said. “When you start getting out toward Mars, you’re very far away. You can’t rely on ground control.”

The stillness of space

Anderson noted that space can be a dangerous environment but also one that brings a sense of tranquility. It’s something she got to experience herself, if only for a few seconds in 2015. The engineer, who was then a postdoctoral researcher studying how low gravity environments can affect human eyesight, had the opportunity to ride on one of NASA’s famous parabolic flights—large airplanes that fly high into the air then plummet quickly to make passengers feel like they’re weightless.

In a recent video, Anderson described a moment she had to herself at the end of that flight: “I gently push off, and in that 20 second window, I get to just float and experience the calmness and stillness of space.”

For the engineer, who refers to herself as a “little bit of a Martian” because of her passion for that planet, the feeling was short-lived. For Mars astronauts, that stillness will be an everyday reality. Even communicating with friends and family back home will be an ordeal. If you speak into a microphone on Mars, it can take anywhere from about five to 20 minutes for someone on Earth to hear your call. Mental health interventions like psychotherapy will be nearly impossible. 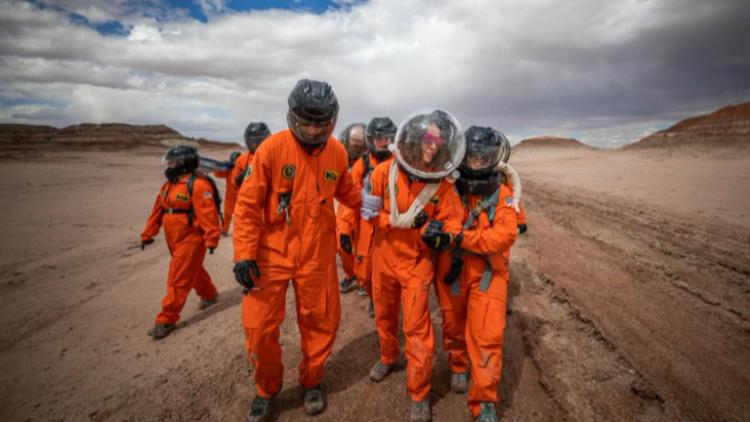 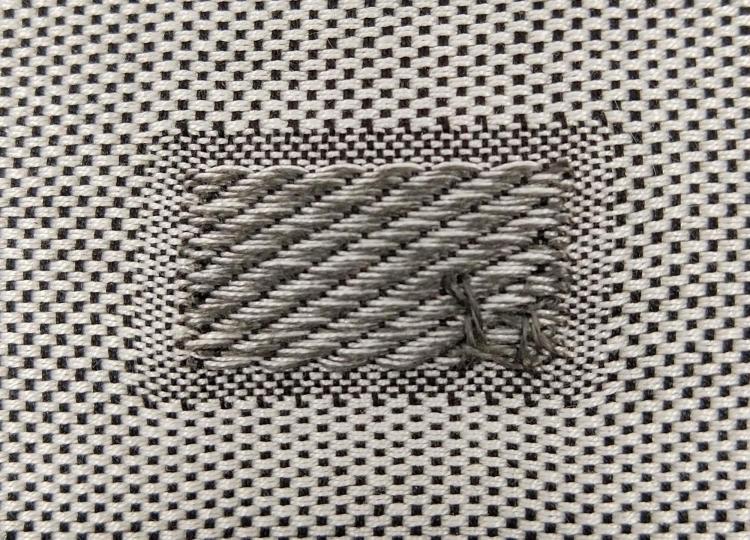 Top: Allie Anderson (middle, in helmet) participates in a class held in southern Utah and led by the CU Anschutz Medical Campus simulating the challenges of providing medical care on Mars; bottom: A patch of fabric that weaves in electrodes for monitoring human heart signals. (Credits: NASA/JPL-Caltech/Anderson lab)

“Astronauts aren’t going to be able to take a vacation from that environment,” Anderson said.

So she and her colleagues, among other research projects, are trying to work within that uncertainty. They’re designing tools and strategies that may one day allow health professionals on Earth to monitor and even treat Mars explorers when they’re feeling stressed out.

Katya Arquilla, a graduate student working with Anderson, sees a lot of parallels to the challenges of providing mental health resources on Earth.

“A big issue is to get over the stigma of mental health,” she said. “That’s a problem we see here on Earth all the time—getting people to realize that they may have a mental illness and to seek help.”

In one project, Arquilla and Anderson have devised new ways of collecting electrocardiogram (ECG) data on human patients. These heart signals, which are often used to diagnose heart attacks and similar health problems, can give medical personnel a window into how people are handling stress. Normally, doctors rely on obtrusive and uncomfortable adhesive electrodes to take ECG data. Arquilla, in contrast, developed and tested new kinds of woven electrodes that can be incorporated into the fabric of a normal, tight-fitting T-shirt.

Arquilla said that her thinking about the project has changed during the COVID-19 pandemic. Today, millions of Americans—not just highly-trained astronauts—are undergoing the kind of loneliness and isolation that may await future Mars explorers. She hopes her research can make their lives better, too.

“I think the conversation on mental health here in the United States is finally shifting in a healthy direction,” she said. “Hopefully, these types of technologies can be integrated into care on Earth, as well.”

When people from Earth finally make it to Mars, they’ll need someplace to sleep—and those future living spaces will have to be much more than just homes, said Patrick Pischulti, a graduate student working on Klaus’ team.

“For astronauts, the space habitat is their ecosystem,” he said. “It provides oxygen. It provides water. It protects them from the dangers of the space environment.”

Klaus, Pischulti and their colleagues are focusing on how NASA and other space agencies can keep these delicate ecosystems “alive” even when humans aren’t onboard. In other words, how can a space habitat continue to function when there are no astronauts around to perform routine maintenance? The research is part of a NASA-funded initiative called the Habitats Optimized for Missions of Exploration (HOME) Space Technology Research Institute, which is led by the University of California, Davis. 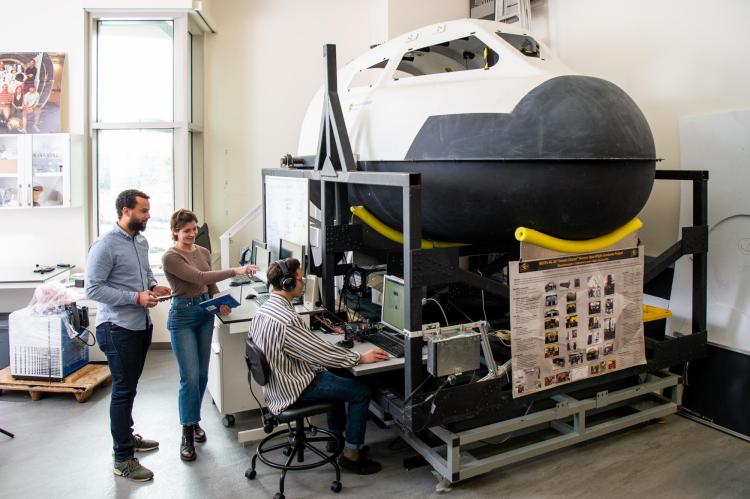 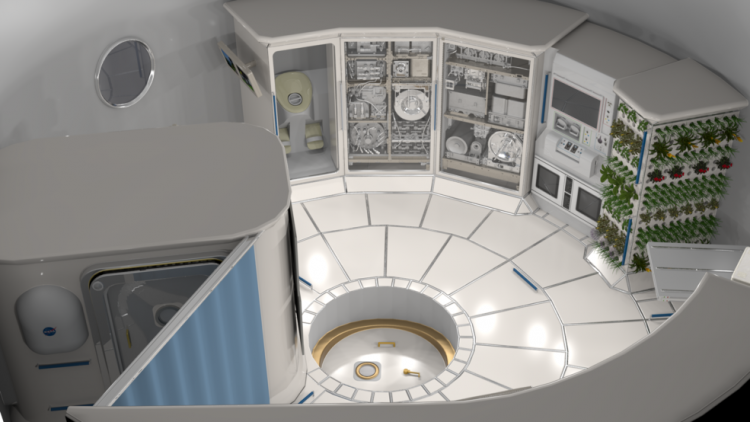 Top: Graduate students (from left) Patrick Pischulti, Annika Rollock and Ray Pitts in front of a full-sized model of a space shuttle nose cone on the CU Boulder campus; bottom: An artist's depiction of what a space habitat might look like. (Credits: CU Boulder College of Engineering and Applied Science; NASA)

That’s important for Mars exploration in which habitats may sit empty for months in between crewed missions, Klaus said.

“With the exception of a few short durations in between Skylab missions in the 1970s and during the early International Space Stations construction phase, there’s never been an opportunity or a need in NASA’s missions to have a human spacecraft with no humans onboard,” he said.

The key to developing these kinds of self-sufficient homes may lie in “smart systems.” That’s a catchall term for intelligent machines, from vacuuming robots to floating networks of fire detectors, that can work in tandem with human users. NASA, for example, has already sent three robots collectively known as Astrobee to the International Space Station. The space agency is testing whether these flying, cube-shaped machines will be able to help astronauts complete their daily chores, such as shuttling objects around the station.

On Earth, there are no shortage to these kinds of tools, said Annika Rollock, a graduate student working on the HOME project. She and her colleagues, however, are seeking to better understand which ones may be critical for keeping astronauts healthy and safe—and which ones might only get in the way or, even worse, put human lives at risk.

“We have to say, ‘This AC unit or fire detector works great in an apartment building, but it won’t work in space, or it’s not going to be worth sending it into space,” Rollock said.

For now, working in the field of bioastronautics can take a lot of patience—it may be decades, if not longer, before we see an Earthling set foot on Mars. But Anderson is hopeful, at least, that she’ll see her hard work make it to the red planet one day.

“I am hoping to see somebody stand on the surface of Mars before I die,” she said. “Even though I think I’ll be an old woman when that happens.”

CU Boulder has been selected as a member of the United States Space Command Academic Engagement Enterprise, a new national program designed to expand collaboration and academic exchanges between universities and Space Command. END_OF_DOCUMENT_TOKEN_TO_BE_REPLACED

Since July 2022, a miniature satellite about the size of a shoebox has been orbiting Earth and monitoring how much solar energy reaches the atmosphere, one of the "most important" Earth science measurements. Now, scientists are finalizing their analysis of the first five months of the testing. END_OF_DOCUMENT_TOKEN_TO_BE_REPLACED

The historic spacecraft soon hit Earth's atmosphere flying at speeds of almost 25,000 mph. CU Boulder aerospace engineer Iain Boyd breaks down what will happen to the capsule, and how NASA will keep it safe on reentry. END_OF_DOCUMENT_TOKEN_TO_BE_REPLACED
Return to the top of the page