Banner image: Cadherin proteins (stained green in this image, surrounding cell nuclei which are stained red) are critical in many different stages of cancer, such as spreading between different parts of the body. (Credit: NCI Center for Cancer Research, Flickr)

The findings, published this week in the Proceedings of the National Academy of Sciences, could lead to more life-like artificial tissues and tumor busting drugs.

“Better understanding these proteins allows for the design of more effective engineered tissues that better mimic biological materials as well as cancer therapeutics that are more efficient and target-specific,” said Connor Thompson, lead author and graduate student in the Department of Chemical & Biological Engineering. 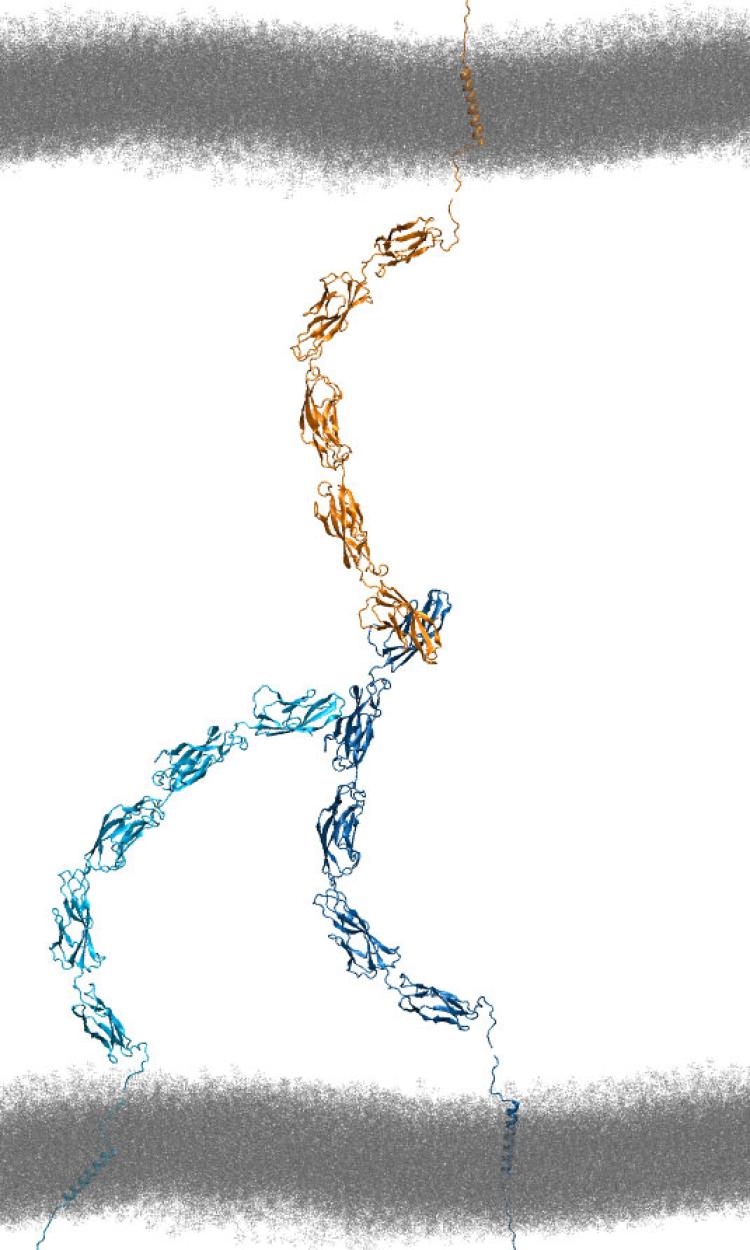 For example: If a cancer treatment could block a specific interaction of these cadherin proteins, it could potentially slow tumor growth by stopping or slowing the formation of new blood vessels in tumors, said Thompson.

Cadherin proteins are important in our bodies because they facilitate the binding and adhesion of cells in neural, cardiac, placental and skin tissues, among others, helping them maintain their function and shape.

These large, rod-like proteins in the cell membrane mediate information between the inside and outside of the cell. Where they stick out, they can bond with other cadherin proteins from the same cell, as well as those from other cells.

These proteins were first discovered more than 40 years ago. But in their work on them since, scientists have been perplexed by the fact that the individual bonds between these proteins are weak.

“There are some major unanswered questions about the glue that holds these cells and tissues together,” said Daniel K. Schwartz, co-author on the paper and Glenn L. Murphy Endowed Professor in Chemical & Biological Engineering. “There’s been a gap in understanding between the seemingly fairly weak interactions between the proteins and this very strong sticking together that cells have in tissues.”

Like Velcro, the study found, the more pieces stick together, the stronger the bond and the longer it lasts. This amplified strength not only between proteins which exist on the same cell, but between proteins located on different cells—creating bonds 30 times stronger than the sum of their individual strengths. And once the bonding begins, these bonds become progressively stronger and stronger. 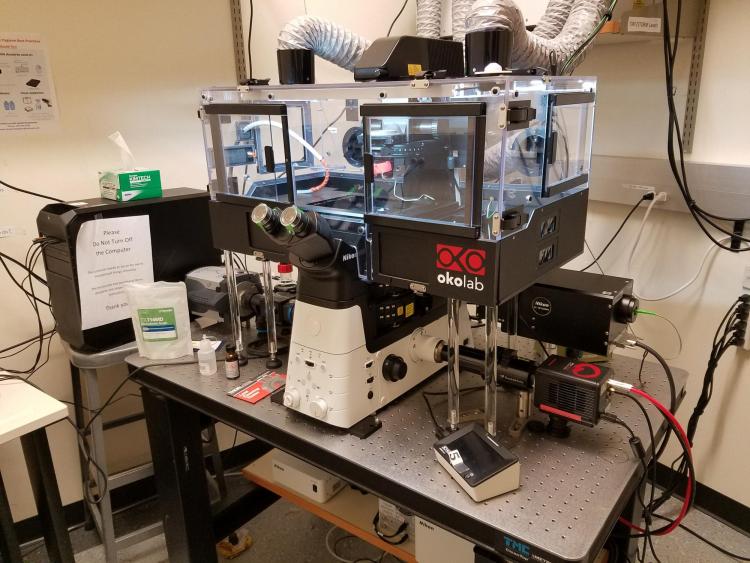 A super-resolution microscope in the BioFrontiers Advanced Imaging Suite, used to observe individual cadherins and their interactions. (Credit: BioFrontiers Institute.)

Proteins are formed out of a very limited palette of ingredients, said Schwartz.

Unlike the infamous “spike proteins” found on the virus that causes COVID-19, cadherins move around in a fluid membrane, able to rearrange themselves, and team up to bond with other proteins to form clusters and grids.

In Thompson’s previous publications on cadherin proteins, he studied the motion of these proteins and how they interact and bond with each other on the same cell membrane. In this new research, he’s finally discovered how they bond so strongly between different cell membranes.

“It sounds like a small advance, but that was actually a huge leap, and it required him to develop entirely new methods,” said Schwartz. “Those methods themselves may end up being some of the greatest impact that comes out of this work.”

With this technology, Thompson could simultaneously see the molecules move and when they would bind to one another—at which point a color change occurs. Using big data allowed the researchers to look at tens of thousands of interactions between the molecules.

The nature of the world on a molecular level is that everything is constantly bumping into everything else, including the bonds that cadherin proteins have formed, according to Schwartz.

“But when interactions are very strong, they stay bound longer,” said Thompson.

With National Science Foundation support, a CU Boulder-led initiative aims to attract underrepresented people to geosciences and foster grassroots ideas at the frontier of “inclusive and collaborative science.” END_OF_DOCUMENT_TOKEN_TO_BE_REPLACED

Researchers from CU Anschutz and CU Boulder are developing an artificial intelligence tool to diagnose dementia at earlier stages in an effort to curb its progress and plan more effective treatment options. END_OF_DOCUMENT_TOKEN_TO_BE_REPLACED

A new CU Boulder-led study documents how a durable plastic can be perpetually broken down and remade, without sacrificing its desired physical properties. END_OF_DOCUMENT_TOKEN_TO_BE_REPLACED
Return to the top of the page